The name of "A. Fielding," or "A.E. Fielding," was signed to twenty-five detective novels, published between 1924 and 1944, but the identity of the author turned out to be a mystery unto itself and readers have speculated for a long time who could've been behind the pseudonym – with suggestions running from one Archibald E. Fielding to a Lady Dorothie Feilding. Back in 2014, our resident genre-historian, Curt Evans, published a fascinating blog-post that helped to finally settle the question.

Evans reported that A. Fielding was identified by John Herrington as "a middle-aged English woman by the name of Dorothy Fielding" who "enjoys gardening" and used to reside at Sheffield Terrace, Kensington, London. A posh place where G.K. Chesterton was born in 1874 and Agatha Christie had a home there around the same time as Feilding! He also points out that, while Christie was busily working on The ABC Murders (1936) and Murder in Mesopotamia (1936), Feilding was down the street pounding away at The Case of the Two Pearl Necklaces (1936) and Mystery at the Rectory (1936) – which intrigued me enough to place her on my wish list. 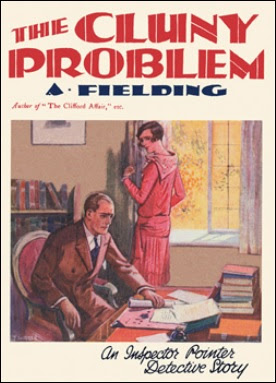 Not surprisingly, it actually took me several years to finally arrive at her work, but recently came across a title in her Chief Inspector Pointer series that sounded really promising.

The Cluny Problem (1929) is one of the earlier titles in the series and takes place in the ancient French town of Cluny, a town of lace, abbeys and ruins, where we find two of the key-characters of the plot. One of them is an American journalist, Vivian Young, who's a reporter on the Texas Whirlwind and has recently become engaged to an English nobleman, Sir Anthony Cross. Cross is one of the directors of the big South African Diamond Combine and is personally looking into "a constant leakage of diamonds sent to Amsterdam" by the Diamond Combine in South Africa, which had been looked into by the firm's detectives and they determined that the brains behind this operation was not in the Netherlands – as the trail appeared to end in France. So Cross had left Capetown to make further inquiries in the matter.

Young, on the other hand, is visiting Cluny purely as a tourist and wants to admire the ancient abbeys and ruins, but she learns from an school friend than an old, but passionate flame, is staying in the town as well. She describes Mrs. Brownlow as "a vamp" and her husband was once suspected having drowned a young fellow, who "went wild over her," in a river in Shanghai and came close to standing trial. So she decided to stick around as a guest of Monsieur Pichegru, a wine grower who takes paying guests, at his Villa Porte Bonheur. And not long thereafter, the villa becomes the stage for a double tragedy.

After a costumed ball, Anthony Cross and Mr. Brownlow are found inside the cedar room, windows latched from the inside and the door was locked with the key sticking inside the lock, and all the evidence suggest they killed each other in duel – as they were in opposite corners with a gun near them.

However, I should mention here that you not expect too much from the locked angle, because the explanation is given halfway through the story and has a stock-in-trade solution. One of those one-size fits-all explanations that writers seem to use when they want a body inside a locked room, but have absolutely no idea how to explain it and don't want to go for a secret passageway. Only writer has ever done something truly clever and original with this locked room trick was John Russell Fearn.

Anyway, Chief Inspector Pointer happened to be in attending a police conference in the region and is asked by the Home Office to act as an observer and oversee the French investigation and the pair of detectives he assisted were great characters – who deserved their own series. Or at least their own standalone novel. Commissaire Cambier is in charge of the case and is a matter of facts person who constantly had to lecture his assistant, Rondeau, to not embroider or twist. You see, Rondeau is a follower of "Poe and his Dupin" and "the Goddess of Reason." He even writes detective stories, but Cambier is of the opinion that "detection is a science" and considers detective fiction to be "poison to the intelligence." Add to that a Scottish private investigator, Mackay, with his thick, Scottish accent and you have assembled yourself an amusing little Justice League. 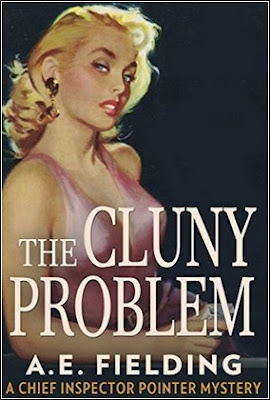 The plot itself is fairly decent. Undoubtedly, the best aspect of it is what exactly happened in the cedar room, which is soon proven not to have been a duel when the medial examiner reveals a gap of half an hour between the two deaths. Pointer finds a third, unaccounted bullet that definitely settles the question. The answer to what happened there reminded me of those closely timed, intricate double murders found in the early work of Christopher Bush (e.g. The Case of the April Fools, 1933).

On the other hand, I had to place a question mark behind the main clue of the murderer's identity. There were a number of clues, or hints, that pointed in the direction of the murderer and the motive, but, let's just say, the biggest clue is easily missed by readers who don't have English as their first language. I was reminded of what Ho-Ling once told me about the Spider Mansion story from Detective Conan. Anyway, despite missing that one clue, I did correctly identify the murderer by picking up on some of the more subtle hints.

On a whole, The Cluny Problem was a decent detective novel, not great, but decent and can be recommended to fans of early the Ludovic Travers novels by Bush. I would appreciate any and all recommendations, because I want to return to Fielding in the near future. At the moment, The Footsteps That Stopped (1926) and Scarecrow (1937) are at the top of my Fielding wish list, but I would like to know what everyone considers to be her best work.
Geplaatst door TomCat on 1/30/2018