Last month, I reviewed the 63rd volume of Gosho Aoyama's long-running series, Detective Conan, published in the U.S. under the title Case Closed and the stories in that collection were jam-packed with unusual, high-quality impossible crime material – ranging from an inexplicable poisoning at a revolving sushi bar to a phantom car that was seen flying. A gem of a volume that will always stand as one of my personal favorites in the series. 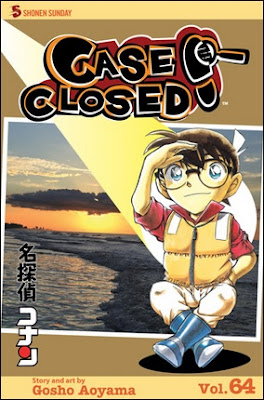 So the impossible crime, two of them focusing on cars, was a recurring motif of that volume, but the 64th also had a dominant theme running like a red thread through all of its stories. All of the stories here, in some way, draw on the past of the semi-regular characters or events that have occurred in previous volumes. And scars! Scars play an important role in the two main, interlinked stories.

The opening story marks the return of, what was supposedly to be, a one-time character from volume 45, Ejiri, who was the victim of an attempted murder, but Conan and Doc Agasa saved his life – which is why he filled in for the latter when he was unable to take the Junior Detective League on a short fishing trip. On their return, they pass a secluded spot in the sea known as Horn Rock. A cursed, rocky islet, shaped like a giant horn, legendary for dooming fishermen and blessing children. So they decide to take a brief detour and explore the jagged rock, but upon their arrival they make a gruesome discovery.

It begins when they find words carved into a rock wall, "mackerel, carp, sea bream, flounder," with a swimming fin jammed between two rocks right next to the words. This leads them to the body of a woman in a wet-suit and the clean mouth piece of the oxygen masks makes it clear to Conan that this murder.

A fourth clue turns up when they discover the victim's diving watch with Akamine Angel Fish Club engraved on the back of the watch, but the word Fish had been scraped off. At this moment, three of her diving friends turns up and becomes very clear that one of them left her behind on the rocky islet to die, which she understood and left behind a trail of clues that would identify her killer – only problem being that this elaborate dying message doesn't really translate into English. And that's often a problem with dying messages, codes and word puzzles in this series. Nevertheless, the story was a fun one and the return of a relatively minor character from a previous case, once again, drives home the idea that the series takes place in a (living) universe of its own.

The second story primarily serves as an introduction to the third case and has a pretty obvious explanation, but still had some points of interest.

A very wealthy, but blind, woman bought a lottery ticket on a whim and won 100 million yen (about 1 million dollars), which she wants to give away to the boy who saved her as a child. She only knows the boy's nickname and that he suffered an injury that should have left a scar across his chest or back. Only problem is that two men came forward with a long scar on their chest or back who claim to be the boy from twenty years ago. So she decided to hire the famous detective, Richard Moore, to figure out who of the two is speaking the truth. The answer becomes pretty obvious, as the story progresses, but Conan discovers that the regular cast of police-characters are staking out the place outside and the reason is that one of the scarred men could be a notorious serial killer who gave Superintendent McLaughin (originally named Kiyonaga Matsumoto) a facial scar – before disappearing over fifteen years ago. 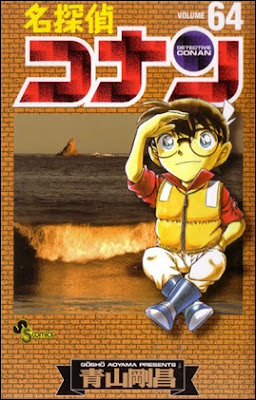 A note for the curious: the blind client (partially) sees through Conan's secret when she finds out that he's not "a teenager whose voice hadn't broken yet," but "a little boy." Or, as she calls him, "Sherlock Holmes disguised as a child."

The third case deals with a final attempt by the police capture this serial killer, who's known to whistle "Let It Be," but ever since this killer disappeared from scene fifteen years ago the statute of limitation has been running out. So they only have one shot left to bring this sword-wielding murderer to justice, but then, inexplicably, the killer strikes again. This time the victim is a well-known criminal psychologist, who issued a challenge to the murderer on television, which ended with him being stabbed to death in his condo. However, the victim left a (solvable) dying message this time.

So as a detective story, this serial killer case is pretty good and relatively well-clued, even if some of the hints hinge on the jargon of Mahjong players, but where the plot really shines is in telling the stories of the policemen who usually play second-fiddle to Conan in the background. We get to know how the Superintendent got his face-scar and the reader is told the tragic story of a police detective who never made it into the series, because he was killed in an attempt to apprehend the murderer. And then there is, what is known as the Metropolitan Police Love Story, between Takagi and Sato that actually appears to have some real progress here. This whole story-arc strongly reminded me of the 87th Precinct series by Ed McBain.

Finally, the last chapter lays the premise of a new story and sees the return of Serena Sebastian's incomparable relative, Uncle Jirokichi, who has become a foil to that famous gentleman burglar, Kaito KID – who has matched wits with the old man in volumes 44 and 61. A fake Kaito KID has promised to loot his "impenetrable safe," known as the Iron Tanuki, which had been built by "the renowned 19th-century craftsman Kichiemon Samizu just before his death." This attracts the attention of the real Kaito KID and announces that he's coming for "the treasure in the tanuki's belly." And this story will come to a head in the next volume.

On a whole, this was another pretty solid volume with good stories and interesting character-development for the police-detective characters. The next volume is already on my pile, but will probably save that one for next month.
Geplaatst door TomCat on 1/28/2018