The Secret of Shark Reef (1979) by William Arden

The Secret of Shark Reef (1979) is the thirtieth outing of that "intrepid trio" from Rocky Beach, California, which was written by the lauded crime novelist and pen-for-hire, Dennis Lynds – who wrote under the name of "William Arden" for this series. The book is an important one as it marked the final appearance of the famous mentor of the boys, Alfred Hitchcock, consequently ending the second chapter of the series. A chapter that began when the series-creator, Robert Arthur, passed away and passed on the torch.

Fittingly, the final case of this last great period of The Three Investigators, as the last thirteen books are generally held in lower regard, turned out to be a memorable one – which brings Jupe, Pete and Bob to an oil-platform in the ocean off Santa Barbara. Despite what the book covers suggests, the menacing-looking sharks are the least of their problems! 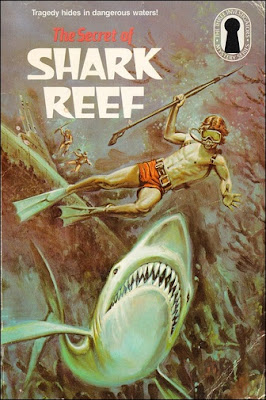 The father of one of the investigators, Bob Andrews, is a newspaper reporter and is asked by his paper to write a story on the troubles faced by the first oil-rig in the blue waters of the Santa Barbara Channel. A group of environmentalists are trying to prevent them from drilling, because the Channel Islands are practically untouched and are teeming with birds, plants and marine life.

So Mr. Andrews asked his son if he, alongside with his two friends, would like to accompany him on his trip, but he also a surprise for them when they arrive at the oil-rig.

The chairman of the protest committee is a well-known mystery novelist, John Crowe, who honors "the junior detective team" by requesting one of their famous calling cards for his collection of mystery mementos. And even more importantly, Crowe has a problem for them to solve that concerns the lead boat of the committee. A fast, powerful craft that consumes a great deal of fuel, but the captain of the Sea Wind always makes a careful calculation to ensure there's enough fuel in the craft to remain at sea the full twelve hours they try to keep up the protest – except that they inexplicably ran out of fuel three times in the past week. There were no leaks in the fuel tanks or lines and the engine checked out. So what happened to the lost fuel?

On a side note, I did find it funny and somewhat ironic that the protesters, who oppose the oil-rigs and have formed a "flotilla of boats" around the platforms, are bugged by a chronic fuel shortage. And all the while they're chanting "heck no, oil must go" and "hey, hey wha'd'ya say, how much oil will you spill today." Unintentionally funny. Anyway...

Jupiter "Jupe" Jones is the brains of the team and he carefully studies the logbook of the Sea Wind, Crowe's notebook and charts of the islands, which tells him exactly how the fuel was lost. However, this answer immediately poses the problem of who, or what, is responsible for the lost.

As the boys grapple with this problem, the athletic Pete Crenshaw gets an opportunity to slip into a wet-suit and search for a potential solution under water. Bob Andrews, on the other hand, has to tackle a problem that Sam Spade, Philip Marlowe and Lew Archer never had to wreck their brains about: how do you follow a suspect into a bar where no minors are allowed? So this keeps them busy until a hurricane rocks the regions and temporarily brings an obscure passage from the Second World War to the surface, which is revealed to be the true driving force behind everything that happened around the oil-rigs.

At this point in the story, it really becomes a matter how they'll resolve the case, because the (main) villain is very obvious after this revelation. And this will naturally lead to some tight spots as the boys have to tangle with the perpetrators and they get help from an unexpected ally. 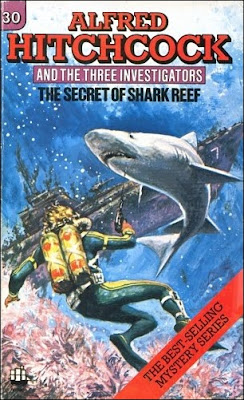 So there's not much else I can say about the plot, or story, except that the World War II plot-thread was better handled than the environmental background, which gave me 'Nam-like flashbacks to Captain Planet. A cartoon show that was supposed to teach children to recycle and take care of the environment, but was so preachy that all it made me want to do was litter and fill the oceans with non-degradable plastics.

Luckily, the plot of The Secret of Shark Reef only showed, without preaching, before (largely) moving on to the obscure, long-lost secret that was hidden beneath the waters of the Santa Barbara Channel. I think this secret, along with the answer to who and what was responsible for the fuel lost, constitutes the best parts of the book. Combined with some splendid scenes, like when the hurricane hit, makes this a splendid read of the wild sea, sharks, sabotage and "monstrous shapes that rise from the ocean." And a fond farewell to the long-time mentor of the boys, Alfred Hitchcock.

On that note, I want to remark that Hitchcock's successor in the series makes no sense now that I have read this book. I have not read the next book in the series, M.V. Carey's The Mystery of the Scar-Faced Beggar (1981), but I know it introduces a fictional replacement for the famous movie-director, Hector Sebastian – who acted as a mentor to Jupe, Pete and Bob until their last case (The Mystery of the Cranky Collector, 1987). However, that role should have gone to the character of John Crowe, because "John Crowe" is one of Dennis Lynds' pseudonyms. Lynds was picked by Arthur to continue the series and perhaps therefore he came up with the name "William Arden," because he was going to act as a warden to the boys. And, therefore, his fictional counterpart would have been perfect to fill the gap that Hitchcock left behind when he passed away in 1980. It makes sense, right?

Anyway, my next post will probably be either a review of Case Closed or a promising looking detective novel from the 1920s. So you have that to look forward to!
Geplaatst door TomCat on 1/26/2018