"In tackling a criminal case... you look for motive and opportunity."
- Ellery Queen (Ellery Queen's The Player on the Other Side, 1963)

Previously, I reviewed Murder Among the Angells (1932) by Dorothy Blair and Evelyn Page, who wrote under the shared penname of "Roger Scarlett," which used to be an overpriced rarity on the secondhand book market, but recently, it was reissued by Coachwhip Publications – together with the rest of the series. Murder Among the Angells proved itself to be an excellent detective novel and decided to follow it up with the second title contained within in that very same twofer volume.

Apparently, Cat's Paw (1931) is very different in structure and approach from the preceding two books, The Beacon Hill Murders (1930) and The Back Bay Murders (1930), which reportedly were entirely written in the spirit of S.S. van Dine. Obviously, Blair and Page took their cue from Ellery Queen here, but the structure of the book also differs from your standard, Van Dinean-era whodunit. 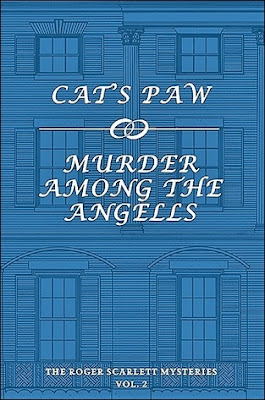 Cat's Paw is divided into four parts and begins with a short prologue, titled "The Question," in which Underwood receives a wireless message from Inspector Kane, who's vacationing abroad, asking to "get in touch with police on Greenough case" and "find out everything." The second part, "The Evidence," tells what happened leading up to the murder and "The Case" is a preliminary investigation by Kane's subordinate, Sergeant Moran. The fourth and last part, "The Solution," gives an explanation drawn from the preceding two parts and "the clues rejected by Sergeant Moran."

So the Boston inspector functions here purely as an armchair detective and reasons the truth from the information that has been brought to him by Underwood and Moran. It's only towards the end that he actually crosses the threshold of the huge, Gothic-style mansion where the murder took place.

The mansion in question was erected by a wealthy recluse, Martin Greenough, whose talebearers whisper that he made his money as a bootlegger or found "bushels of diamonds" in South Africa, but in reality he earned his money in the textile business and invested his earnings in sound stocks – which soared beyond "the wildest of wildcat ventures." So he could afford to buy a large piece of undeveloped land, within the city limits of Boston, where he erected an enormous gray-stone mansion with battlements, towers and ivy. And to complete the doom and gloom of the place, the estate was surrounded by a high wall topped with threatening "spikes of broken glass."

Greenough would have lived a withdrawn and unassuming life there, but his four, older siblings made him the legal guardian and custodian to their children. No doubt hoping that it would give them an opportunity to secure a fat inheritance and financially secure their future. However, Greenough is a capricious devil with three distinct personalities and "tyrannized over them all." He could be very kind, lavishing his relatives with expensive gifts, but often cut them a check in order to get them out of the house for an extended period of time and his word was always final – even on a very personal level. Such as his unwavering opposition to his nephews and niece making an independent living. Cousin Mart, as they called him, wanted to have control over them and the way to do that was money.

So when the family is brought together, to celebrate Greenough's birthday, things come to a head and not least of all by the bombshell he himself drops on his relatives.

However, his nephews also drag a pile of trouble into the mansion. Hutchinson has married a kleptomaniac, Amelia, who usually takes inexpensive scarves and powder-boxes from various department stores. The stores, who know of her character flaw, simply bill her husband for the things she take, but this time she has lifted a necklace worth thousands of dollars. Another nephew, Blackstone, brought a woman, Stella Irwin, who was engaged to his cousin, Francis, but Greenough had forbidden the marriage. So that made him very unhappy to have her under his roof.

Greenough has the last laugh as he drops the biggest bombshell by announcing his imminent marriage to his long-time companion and mistress, Mrs. Warden. A widow who has been with him since her husband was alive and this situation turned out to be deadly cocktail for the old miser. I know not everyone likes a long, drawn-out buildup to the murder, but the slow escalation to murder is very well done here and all of the events in this portion of the story play an important part in the plot – whether they turn out to be red herrings or actual clues. Blair and Page evidently knew how to plot a detective story!

Anyway, to show their goodwill towards their guardian, the nephews put on a firework display on the lawn, while he watches from a second-floor window, but during this spectacle one of them show him through the head.

A note for the curious: during the firework-scene, Francis tells Hutchinson to be careful, because a spark from his match will put him "among the angels." So I wonder if this little scene gave Blair and Page the title for their next book.

Anyway, Sergeant Moran takes charge of the investigation, because Kane was still abroad at the time of the murder, but fails in separating the real clues from the red herrings. So this task comes down to Kane and his solution does, indeed, recall Ellery Queen's best work. Kane expertly maps out the movement of the various suspects and how they're involved, sometimes involuntarily, in the murder and explains the true meaning behind such clues as marked playing cards, a love-lorn note and the stolen necklace. And these clues work beautifully, because they play on assumptions.

There is, however, a smudge on the fair play element that should be mentioned. Ho-Ling already noted this in his review and concerns a clue that was unfairly withheld from the reader, which knocks this otherwise excellent detective story down a place or two. I really wanted to place Cat's Paw alongside Murder Among the Angells, because in every other aspect it was great.

Cat's Paw has a pleasing, labyrinthine plot with a policeman sleuth, who acts as an intuitive armchair detective, while sifting through a pile of physical clues, but the story cheated itself of a place in the first-ranks by pawning one of the vital clues and hiding up its sleeve. A real shame. However, the book is still a good read with enough twists, turns and clues to satisfy the pure, plot-driven readers, who love Van Dine and Queen, but will probably also be slightly annoyed that it (unnecessarily) withheld an important piece of information from them. So make of that what you will.
Geplaatst door TomCat on 1/10/2018