"An investigator needs facts and not legends or rumors."
- Sherlock Holmes (Sir Arthur Conan Doyle's The Hound of the Baskervilles, 1902)

Sven Elvestad was a Norwegian journalist and author best known in his own country for his detective stories, published as by "Stein Riverton," who lended his (pen) name to an annual award for the best piece of Norwegian crime fiction – called the Rivertonprisen (Riverton Prize). A versatile prize that can be awarded to a novel, short story, stage play or screen play.

As a novelist, Elvestad appears to have been prolific with over a hundred titles in his bibliography, but one his earliest endeavors, Jernvognen (The Iron Chariot, 1909), proved to be the capstone of his literary career. The book came in second in "a poll of the greatest Norwegian crime novels of all time" and was translated into a dozen different languages, which makes it one of the greatest international successes Norway has had in the genre. So it was about time that this Norwegian classic got a long overdue publication in English. 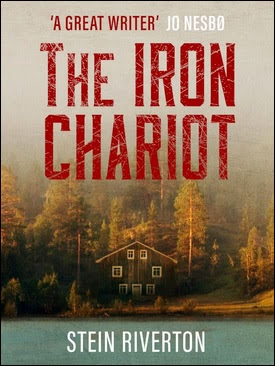 The Iron Chariot received its long-awaited English translation at the hands of Lucy Moffatt and published by the Abandoned Bookshop in early 2017.

I think it's great that a relatively small, independent e-publisher took a chance on a translation of 1909 detective novel from Norway and have to admit, shamefully, that the book would have very likely passed me by had it not been for "JJ" of The Invisible Event – who posted an announcement and a review on his blog. So very grateful that he pointed my attention in the direction of the Abandoned Bookshop, because I noticed that they've reissued a number of detective novels by Clifton Robbins. A very obscure, Golden Age-period mystery writer and Dusty Death (1931), The Man Without a Face (1932) and Methylated Murder (1935) sound like they could be good reads, but they're detective stories to be investigated in a future blog-post.

The Iron Chariot takes place on an immense, rugged island, "an exceedingly popular destination for summer guests," where the nameless narrator of the story arrives at the dawn of summer. He arrives early in the holiday season and there only half a dozen guests present at the boarding house, but the sultry peace is shattered when the body of a man is found at the edge of the forest. The body belongs to Forestry Inspector Blinde and someone "smashed the casing of his brain like china."

In the first chapter, the narrator recalls two peculiar events that occurred on the night preceding the discovery of the body. One of these events happened when he decided two pay a visit to two friends, a brother and sister named Carsten and Hilde Gjærnæs, who live at Gjærnæs Farm, but, when he arrived there, the farm steward showed him the door – telling him that "the squire cannot be disturbed right now." However, the steward looked deadly pale. Obviously, they were trying to hide something. The second event occurs when, on his way back, he meets an elderly fisherman, Jan Jansen, who's a firm believer in the titular legend of the region.
An "old legend" tells a peculiar story of man who used to own the farm a hundred years ago, "a reserved, eccentric type," with a passion half-crazed inventions. He had squandered his inheritance on this hobby. The last of these inventions was a horse-drawn, iron carriage and he drove it to his untimely dead one night. According to the locals, you always heard "the iron chariot rattling its way across the plain" whenever someone was about to die. The narrator and the fisherman had both heard the rattling sound of metal links on the night of the murder.

Evidently, this is not your common, garden-variety murder and requires the expertise of a specialist. So they called in a famous detective from Kristiania (present-day Oslo).

But when Asbøjrn Krag arrives, he behaved entirely like "a holidaying gentleman." Krag spends all his time taking walks, reading, eating and bathing. He's even there when a second body is found in exactly the same place as the previous one, but the Great Detective remained passive. However, the experienced armchair detective will quickly catch on that Krag is playing a cat-and-mouse game with the rather obvious murderer. Regardless, Riverton has to be commended for having the foresight, 1909, to foreshadow the murderer's guilt. Not exactly fine-tuned clueing, but ghosts of hints were dropped here and there. The plot is also very ambitious for the time.

Krag explains that the central problem of the case is the murder of the Forestry Inspector, but through "accidental associations" other events got entangled in it. One of these events is what happened at the farm on the night of the murder and how this related to a death four years ago, which is also when the rattling was heard by the fisherman. The second plot-thread is the truth behind the ghostly chariot, but the answer to this problem will hardly excite modern readers. However, the borderline impossibility of ghostly chariot that leaves no tracks behind was a nice touch. All of these plot-threads are tangibly related to the first murder and gives the plot its complexity.

However, the most important aspect of the plot is the role of murderer in the story, because The Iron Chariot now stands as the earliest known example of a very particular trick and Riverton probably originated it. So this makes of it historical interest to people interested in how the detective developed.

As a detective novel, The Iron Chariot reads like a sultry premonition of the coming Golden Age, even if it will hardly pose a challenge to the modern reader, but the story has more to offer than an early example of the Golden Age mystery novel – namely an excellent translation of Riverton's period prose. Riverton essentially wrote a humid, stuffily atmospheric equivalent of Conan Doyle's The Hound of the Baskervilles (1902). Riverton simply replaced the dark, misty moors for a sunny, rugged island in the south of Oslo, but The Iron Chariot is (almost) as atmospheric as Doyle's famous yarn.

So readers who love the atmospheric detective novels by John Dickson Carr, Hake Talbot and Clifford Orr will probably be able to appreciate this story.

Riverton's writing also reminded me of the work of one of contemporaries, "Ivans," who was a Dutch mystery writer. Granted, I read only one of his books, De bosgeest (The Forest Spirit, 1926), but the plot of that one book also revolved around a forest ranger who was beaten to death in the woods. You have to wonder how many mystery writers in other European countries, like Britain or the Netherlands, were aware of their Norwegian partner in crime. Although he died in 1934 and that might have thrown him into obscurity outside of Norway.

In any case, The Iron Chariot was a fascinating, well written excursion into the genre's past and one that, until recently, had been without our reach behind that pesky language barrier. I really appreciate the people who made this historical important detective available and would like to end this review by channeling the spirit of the late President Ronald Reagan by telling the Abandoned Bookshop to tear down that barrier. There's more where this one came from!
Geplaatst door TomCat on 1/04/2018