My undying love for John Dickson Carr's detective fiction is well documented on this blog and grab every opportunity to reference his stories in otherwise unrelated posts, but the backlog of his unread work has rapidly diminished over the years – leaving only a handful of standalones, historical novels and short stories.

Well, there was one novel in the Sir Henry Merrivale series, And So to Murder (1940), which lingered on the pile for years, but decided it was time to finally wrap up that series. So here we go. 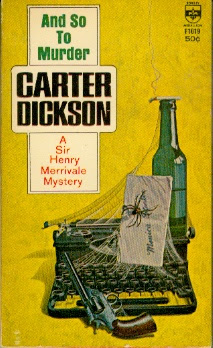 The setting of the story is Pineham Studios during middle-and late August, "before there had come any glimmer of events that were to shatter Europe by the end of the month," where several movies are being shot. One of the productions is based on a best-selling, but scandalous, novel, entitled Desire, which was written by a canon's daughter from a small village.

Monica Stanton is elated to have gained a position at the film studio as a scriptwriter, but those feeling quickly subside when Monica learns she isn't going to work on the adaptation of her own novel. A producer by the name of Tom Hackett assigned her to work on a script based on William Cartwright's latest detective novel, while Cartwright is adapting her novel for the big screen – which brings back memories of Monica's annoying aunt grieving over the fact she didn't write a nice detective story like Cartwright.

Of course, Monica and Cartwright are simply ignoring their true feelings for each other, but, luckily for them, an aspiring murderer is driving them closer together by targeting Monica.

A spate of incidents occur over several weeks, which include water in an innocent looking bottle being replaced with sulfuric acid and the same corrosive liquid is pored down a speaking tube – nearly disfiguring Monica. There are anonymous letters being passed around and a poisoned cigarette almost took the life of one of the actresses, but the problem is that these incidents are merely (detective) interruption in a character-driven, comedy of manners-style novel. And that makes it very difficult to review this book.

There are several titles from the Merrivale-series, written under the name of "Carter Dickson," in which Carr attempted to take a different approach to the detective novel, such as A Graveyard to Let (1949) and The Cavalier's Cup (1953), but they were still detective stories. Surprisingly, for Carr, And So the Murder merely masquerades as one and the mystery elements that are present are poorly handled.

A portion of the information pertaining to the plot was withheld from the reader and that's detrimental to any impact the solution might have had, which had some points of interest. But were ultimately lost in the mess. A lot of the trouble could've been prevented if they simple had decided to lock a few doors or hire security guards. You have to wonder why H.M. even bothered with this case at all.

And So to Murder has some points of interest: the depiction of the film studio and what goes on there were interesting, as were the characters buzzing around the sets and the flashes of humor, but as a detective story it was as unsatisfying as Seeing is Believing (1941) and Patrick Butler for the Defense (1956). I can only really recommend this one to completists.

So, there you have it, after several years I finally wrote and posted as less than enthusiastic review about a John Dickson Carr novel, which I hope will be as rare an occurance as a snow-covered Sphinx.

Previously reviewed on this blog: