The Man Who Explained Miracles

"Why, sometimes I’ve believed as many as six impossible things before breakfast."
- The White Queen (Lewis Carroll's Through the Looking Glass, 1871) 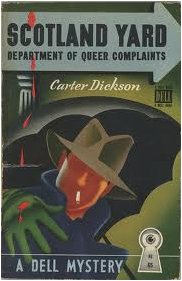 A furnished room, alongside with the corpus delictis, vanishes from an apartment building, a burglar traverses a stretch of snow without leaving footprints and a man witnesses how a floating glove snatches up a gun and shoots a man point blank in the chest. These are only a few examples of problems brought to Colonel March's attention, who, as the head of Department D-3 of Scotland Yard, has to decide whether these implausible stories are either gross exaggerations, elaborate hoaxes or perhaps cleverly disguised crimes.

If such a department would exist in our everyday world, its sole task would be to keep the confused souls, who occasionally feel the urge to confess that it was them who surreptitiously stole the Crown Jewels when nobody was looking, from bothering the regular police, however, this is John Dickson Carr's mad, mad, mad universe – and not everyone raving feverishly about disappearing rooms and invisible men is a head case. The Department of Queer Complaints (1940), published under the byline "Carter Dickson," collects seven of the nine-recorded cases that passed through the office of Colonel March.

Colonel March finds a confused man, named Horace Rodman, sitting on the other side of his desk, relating a bizarre story of a disembodied glove who shot a man in the apartment across the street, which had an even more unlikely follow-up when he stormed the apartment with a policeman in tow – only to discover an empty room and a broken window "magically" restored. March never leaves his desk to the make the invisible marksman emerge from our blind spot and it did not disappoint. It's perhaps a tad-bit over elaborate, but that's smoothed over once you learn of the motive. Great ending that was very much in the Carrian spirit.

Part of the plot of this story was used for the radio play "Man Without a Body," which also recycled the impossible crime from the stage-play "Thirteen to the Gallows."

The Footprints in the Sky

Dorothy Brant loathed Mrs. Topham and the fact that her footprints where the only traces in the snow, leading to and from the doorstep of Mrs. Topham, makes her the only suspect when the hated woman was brutally beaten and robbed on the evening when Brant visited her. Luckily, Colonel March noticed the footprints in the sky. The solution is something Clayton Rawson might have come up with (e.g. The Footprints on the Ceiling, 1939) and the circumstances of the crime recalled Paul Halter's The Lord of Misrule (1994), which isn't necessary a good thing (in this case it's kind of corny), but overall, it was a fun story and loved the idea of the metaphorical footprints left on the night sky.

The Crime in Nobody's Room

An entire room, harboring the body of a dead man, vanishes from an apartment building, but it's not a very good or clever story – I'm afraid. The solution to the disappearing room was blindingly obvious and the overall plot only so-so. Oh well, every short story collection has its duds.

Carr rewrote this story as the radio play, "Five Canaries in a Room."

Unusually, for Carr, this story opens with a messy bank robbery, more reminiscent of the hardboiled writers who described the seamier side of life than a cerebral puzzle, but one is eventually deposited on the desk of Colonel March – and involves locating an invisible piece of furniture. The bank robbers were caught, but the money was probably dropped off at a fence, who specializes in laundering dirty money, and the police have a pretty good idea who this guy is, however, the only proof (i.e. the stolen money) vanished from a locked room. The room was strip-searched without finding as much as a snippet of cash, but Colonel March believes they might have overlooked a big piece of furniture that nobody ever seems to notice.

A big, chunky piece of furniture that everyone has in his home, but never notices, resonated the "Judas Window," which every room has but only murderers could look through, and "The Silver Curtain," from which they can cut a figuritive invisibility cloak. Carr loved to create domestic horrors! The only weakness in thia story arises if you reject the launderers hiding hole as a piece of furniture.

"Hot Money" was also rewritten as a radio play and broadcasted under the title "Nothing Up My Sleeve." Arthur Porges' collection of locked room mysteries, The Curious Cases of Cyriack Skinner Grey (2009), has a lot of impossible situations like this one – c.f. "The Scientist and the Invisible Safe."

Death in the Dressing Room

A pick-pocket has been looting the wallets of the patrons of The Orient Club and one the dancers is stabbed to death in her dressing room, but Colonel March is on the scene (originally to look into the unusual pick-pocket case) to take charge of the case and turns a cast-iron alibi into scrap metal. A well-written and deftly plotted story.

This story was rewritten for Murder Clinic, instead of Suspense, and, IIRC, March was replaced with H.M.

A young man looses everything, except his ticket to return home, in a French casino and is approached by a shady characters who offers him a wad of money in exchange for a favor: he has to sneak a bottle of pills pass custom services. However, the entire plan collapses like a house of cards when he witnesses how an invisible assailant stabs his new employer in an empty cul-de-sac. Upon re-reading this story, first read in the anthology The Mammoth Book of Locked-Room and Impossible Crimes (2000), I have to come to the conclusion that this is perhaps one of my favorite tricks for this kind of impossible crime. So simple and effective.

The final case for Colonel March in this collection offers a similar problem as in his previous outing: a man is stabbed to death while standing alone on a remote, rocky spot of the beach, under observation of three witnesses, who see him waving at one of them before he collapses – stabbed in the back with something like a thin, old-fashioned hairpin. It's a decent enough story that did nice job of leading me up the garden path. I was convinced that the victim was stabbed (without noticing it because of the nature of the weapon) before he had reached that desolate spot and had either a) succumbed at that place from internal bleeding or b) waving had ruptured the wound. This would have been a neat method for the murderer to (accidentally?) finish off the victim after he didn't die instantly from the stab wound. Just imagine, murdering someone by waving at him or her. I think I would've let Colonel Race wave at the victim and accidentally create the impossible situation.

All in all, this was a solid collection showing Carr as one of the most versatile and inspired writers of his generation, who was not satisfied with merely explaining who dented the skull of Sir Ivan Pale in his windowless séance room with a crystal sphere, but also finding a way for the murderer to aparantly phase through a solid oaken door that was locked and bolted from the inside. Carr purposely placed hurdles in front of him to make things more interesting and fun, and that he tripped once or twice did nothing to lessen that effect. Carr simply was one of the best and most enthusiastic players of the Grandest Game in the World and that rubs off on the reader.
Geplaatst door TomCat on 5/30/2012