Presents from the Past

"...And all that was left to do was put together the pieces."
- Hajime Kindaichi (The Kindaichi Case Files: Smoke and Mirrors, 1993)

Some time has passed since I last read a novel from Bill Pronzini's four decade spanning series about his "Nameless Detective," but the previous review on this blog, covering the recently translated The Decagon House Murders (1987) by Yukito Ayatsuri, gave me a splendid excuse to delve into Quicksilver (1984) – which has a plot touching upon the unique history between the United States and Japan. 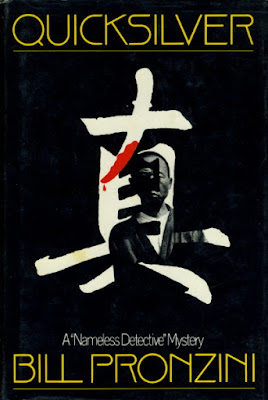 In the opening chapter of Quicksilver, Nameless has gone into an official partnership with an old friend, ex-police lieutenant Eberhardt, who found office space in a good location, but the rent is pushing nine-hundred bucks a month. Luckily, there's a client waiting in the wings.

Haruko Gage has been the target of an anonymous, but generous, admirer who keeps sending her expensive gifts in the form of jewelry, which appears as an easy enough of a job for Nameless. It's simply a case of checking on some of Haruko's former lovers and hopefuls who were rejected. But things are seldom this easy for him.

These inquiries take Nameless to San Francisco's Japantown, but what began as a fairly benevolent problem turns into something far more sinister when Nameless visits a public bathhouse and stumbles upon the remains of a member of the Yakuza – hacked to the death with a katana!

It's not the only unnatural death Nameless finds on his path, but, in spite of the presence of the Yakuza, the book isn't a repeat of Dragonfire (1982) and his descend into the mafia-controlled quarters of Chinatown. Dragonfire was a hardboiled tale that put Nameless in the hospital and Eberhardt in a coma, which came on the heels of two unapologetically, classically styled-and plotted novels, Hoodwink (1981) and Scattershot (1982), but Quicksilver falls somewhere in between – i.e. a character-driven detective story with professional criminals lurking in the background.

The trail of bodies is slowly guiding Nameless many decades into the past, all the way back to the early 1940s, when American citizens of Japanese descend where thrown in internment camps for the duration of World War II. And the now often forgotten crimes that took place there.

I think mystery fans that've read a fair amount of Japanese detective fiction will recognize a familiar theme in the motive and identity of the murderer, but I don't know if that was done as a conscious nod to their corner of genre – considering there was even less Japanese crime fiction available in 1984 than there's now. 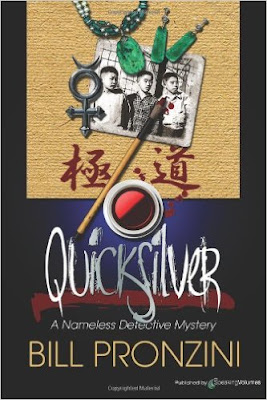 There's also the all important difference that Quicksilver was written from an American point-of-view, in the hardboiled vein of Dashiell Hammett and Raymond Chandler, which makes this an item of interest for scholars/connoisseurs of the Japanese crime story. It is interesting as comparison material to how Japanese mystery-and crime writers tackled this subject.

What makes the "Nameless Detective" series of interest to a plot-obsessed classicist, like myself, is not only the occasional excursions to the locked room niche (e.g. Hoodwink, 1981 and Bones, 1985), but also how relatable Nameless (and Pronzini) is as a fellow mystery fan boy. Nameless observes how a police-inspector, named Leo McFate, "talked like Philo Vance" and how a door "creaked open like the one on the old Inner Sanctum radio program."

And than there's Nameless' collection of pulp magazines, which feature or is mentioned in nearly every novel. In this story, Kerry Wade borrowed an issue of Midnight Detective with a luridly illustrated cover in the Yellow Peril tradition. My "Paperjack" edition has a synopsis that was written in that frame, because it promises such things as "a violent ritual murder" and "perverse kidnapping."

That's not at all the well put together, calm and slow moving story, which has the patience of meandering river that knows it'll eventually reach its inevitable conclusion – and doesn't need any gore to disturb its readers.

In short, Quicksilver is a great entry in the Nameless series and this badly written review really doesn't do it any justice. Read it for yourself.
Geplaatst door TomCat on 8/16/2015