"Shine on this life that's burnin' out"

The last time I left The Nameless Detective, he was coming from one of the worst weeks in his life. Professionally, he had to deal with a very dissatisfied and mentally unstable client, who accused him of bungling up a case she had given him, and begins a media campaign to get his private investigators license revoked – as well as picking the lock of three baffling and, to all appearances, impossible crimes. A backlash of these problems is felt in his personal life when his relationship with Kerry Wade begins to unravel and things are about to get worse. Much, much worse. 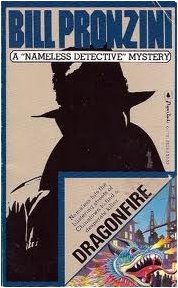 Dragonfire (1982) takes place not long after the events in Scattershot (1982) and Nameless is no longer a private investigator or in a relationship, which is something his friend Lieutenant Eberhardt can sympathize with. His wife has walked out on him. So the sad dopes sit in the backyard, gulping down beers and throwing strips of meat on the barbecue, feeling miserable when the doorbell rang. On the doorstep they find an Asian-looking man who immediately opens fire: sending Eberhardt into a deep coma and Nameless to the hospital with a metal slug in his arm, but within a week he's back on the street – as pissed off as a fire breathing dragon with the morning blues.

The two books preceding this one, Hoodwink (1981) and Scattershot, were unapologetically classical in tone, stringing together no less than five locked room mysteries in total, while Dragonfire is outspokenly hardboiled. But do not assume that, after being released from the hospital, that Nameless goes full Mike Hammer on the inhabitants of Chinatown. It's hardboiled in the way that it leads you away from the safe tourist strip of that neighborhood to a seamier part of town, filled with gambling holes and gang members, where prying strangers aren't always the recipient of Chinese hospitality. Oh, and in case anyone is getting the wrong idea here, Dragonfire is not an updated Yellow Peril story. On the contrary, Pronzini depicts the Chinese characters in this book respectfully, honest, but respectfully and without a trace of racism.

Anyhow, in defiance of another attempt on his life, and Eberhardt still fighting for his, Nameless deals with the problems in front of him in a surprisingly rational manner – acting as a detective should by following up leads and connecting the spaces between the dots. The ending and the character of the murderer were also very well handled and probably my favorite part of the book. The plot was a bit simpler than in the previous books, mentioned here above, but that it had a plot to begin with, when it could have easily been a full-out thriller filled with gun smoke and the dull cracking of shattered bones, shows why I am rarely disappointed when I pull a Nameless novel from my shelves.

It's also why I have been rather summary in my description of this book. A lot more happens as Nameless gauges for the truth and the theme's in it (making choices and how you are sometimes forced to be able to differentiate between bad and Bad) makes for a good read, if you're familiar with the characters, and therefore I think that Dragonfire is unable to disappoint any true fan of this series.

Last but not least: Pronzini and Muller's The Bughouse Affair will be released on January 9, 2013.

All the books I reviewd by Bill Pronzini: