"When the scheming, indomitable brain of Sigsbee Manderson was scattered by a shot from an unknown hand, that world lost nothing worth a single tear; it gained something memorable in a harsh reminder of the vanity of such wealth as this dead man had piled up—without making one loyal friend to mourn him, without doing an act that could help his memory to the least honor."
- E.C. Bentley (Trent's Last Case, 1913).

Max Murray (1901-1956) was an Australian mystery novelist, who began as a bush boy
and did odd jobs in American lumber camps and on freight yards, before he began to work his way up in the world of journalism – holding positions as a foreign correspondent for News Chronicle and during WWII he was the writer/editor of Radio Newsreel for the BBC. When the war ended, Marruy devoted most of his time to writing fiction and cranked out a dozen detective novels, all but one of them hoisted in a uniform title, but they have individual personalities as they lacked a series detective. As Xavier Lechard remarked on the GADgroup last week in reference to Pat McGerr, "not having a series character may often be a good thing artistically but it never does wonders in terms of sales and recognition," which is why Murray is referred to nowadays as Max Who. 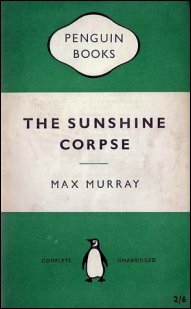 The Sunshine Corpse (1954) is Murray's eight stand-alone mystery and opens with Arnold Emeny, a traveling marine biologist, wandering into a fruit stall in Florida, the Sunshine State, to buy a oranges – only to find a corpse sprawled in a chair, amidst souvenirs and fruit, and a man, the artist Bignal Hycer, busy sketching the body. This is probably the best part of the book, soaked in juicy, imaginary scenes and touches of humor (e.g. Arnold's staring match with the corpse, which he lost).

Lattimer Kell was the name that went with the body and was regarded as an outsider, who did very little to make himself agreeable or blend in with the community. On the contrary, as even his son, Bill, and the woman he wishes to marry, Lili, turn out to be in possession of some very good motives, but then again, everyone seems to have wanted him dead. Like Sarah Jo Chansey and her brother, John, two members of one of the regions oldest family and the preacher Sherman Jones, whose rifle was used to shoot Kell, and his two charges: two young boys named Palmer and Willie.

Normally, I wince when children are introduced into a mystery, because, most of the time, they are portrayed as either miniature adults or as a character from Children of the Corn (i.e. unhinged), which, luckily, was not the case here and Murray appears to have had the same knack as Gladys Mitchell when it came to characterizing children – making it less of trial when they regularly appeared after the sheriff began printing wanted bills with Sherman's face on it. The direct result of a second murder of one of the locals, who was found floating face-up and staring at the sun. 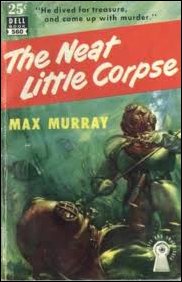 Sherman's escape from town shows that Murray could plot, but this never carried over into the solution, which was a bit muddled and a lot of things were withhold from the reader (and the clues were already thin on the ground to begin with). Signs that a new era was dawning and characterization was beginning to take president over plotting. So I can't really recommend The Sunshine Corpse to Golden Age aficionados, unless they want something different for a change. But don't expect too much from it as a proper detective story.

A year or two ago, I read The Neat Little Corpse (1951) and that one I can recommend, even if it's not exactly a paradigm of Golden Age plotting either, however, it's a cracking good yarn involving a sunken pirate ship, off the coast of Jamaica, stuffed with treasure, local superstition and dark secrets as unfathomable as the depths of the sea itself. I really enjoyed it and was tempted to put it in my list of favorite mysteries, but it just wasn't good enough no matter how enjoyable the story itself actually was. But decide for yourself if you ever happen to stumble across a copy.

Well, I hope this one was obscure enough.