One of Those Weeks

"But what you see isn't always what's happening."
- Jonathan Creek (The Problem at Gallows Gate, 1998)

After posting the review of Marco Books' De dood van Callista de Vries (The Death of Callista de Vries, 2012), I exchanged emails and swapped opinions with Books on, inter alia, the deviations in clueing and the incorrect solution I came up with while reading the book, which was, nonetheless, endorsed and imprinted with the authors rubber stamp of approval. Of course, the one time I come across scholarly and make a few astute observations, it’s only read by one other person. But, yes, there's a point to this palaver. The conversation gave me an insatiable appetite for another slice of neo-orthodox detective fiction, but the next installment in Books' series is still in the works and thus I turned to one of his contemporaries, Bill Pronzini, whose work is well represented on my bookshelves and to-be-read pile, and the latter had one of his books that embellishes its plot with no less than three impossible scenarios – so it was easy pickings. 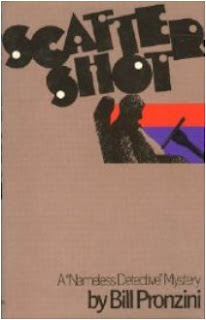 Scattershot (1982) follows in the footsteps of its predecessor, Hoodwink (1981), in which The Nameless Detective solves a pair of murders, perpetrated under seemingly impossible circumstances, tied to a group of pulp writers who were all the rage back in the 1940s. He also meets Kerry Wade, who becomes his love interest. You'd think that solving a baffling murder case and getting the girl would turn over a new leaf in the life of this lonely wolf, but Scattershot offers up a picture of one of the worst weeks in his life and only Tsutomu Yamaguchi could’ve claimed to have had a worst week.

The problems opposing Nameless in this novel can be categorized into two kinds: personal problems and professional problems. The personal ones come mainly from the uncertainties of the status of his relationship with Kerry and the interference from her father, who's not a fan that his daughter is seeing an older man with an unsavory, low-paying job. Professionally, the problems may acquire a personal note when an unsatisfied and somewhat unbalanced client starts a media campaign to get his license revoked and take away his livelihood.

I have to note beforehand that the three impossible situations in this book had previous lives as short stories and they were sewn together with bridging material. Just an FYI.

Edna Hornback hires Nameless to shadow her husband, Lewis, and gather evidence of his infidelity and find the money he pilfered from their company, which is a routine job for a private detective. Nameless follows Lewis around like a cat chasing its own tail, but the man actually manages to shake off his own shadow when he vanishes from his locked car, which Nameless was constantly watching from his own car, leaving only a smears of blood on the front seat as a reminder that there was actually someone in the car. Nameless does a good job at figuring out how the stunt was pulled off, but not before his reputation takes a beating it might not recover from when his client decides to file a suit for criminal negligence and riles up the media against him. It's also one of Pronzini's cleverest and most satisfying ploys involving an impossible disappearance (an honorable mention to the (overly?) ingenious "The Arrowmont Prison Riddle," collected in All But Impossible!, 1981, edited by Edward D. Hoch) and I wonder if this plot strand was a conscious nod to John Dickson Carr's (writing as Carter Dickson) She Died a Lady (1943). The solutions have a few points in common and the setting of the crime-scenes (cliff/slope) were also a bit similar.

Anyway, Nameless is advised to stop frequenting his usual spot of trouble, at least, until this blows over and he has another assignment waiting, which consists of tracking down a reckless socialite and serve her with a subpoena. What can possibly go wrong? It's not like she too is going dissipate into thin air, however, he does find her in a locked cabin in the company of her secretary, shot to death, and she seems to have been the only person who could’ve pulled the trigger. This was sort of a short story within a novel, covering two chapters, but it's nonetheless admirable how many clues were crammed into this short intermezzo.

I loved how this book played on theme of the story book detective (read: murder magnate) who always happens to be mooning around when the criminal elements are abound, and this, uhm, talent is at the root of his more pressing problems and it's not something you can turn off like a light switch. Take, for example, the last assignment of his disastrous week: guarding wedding gifts that are locked away in a secured room and he has to plant his ass in front of the door with a pulp magazine. What can possibly go wrong this time? Well, the sound of broken glass and stumbling in the room drags Nameless away from his fictional colleagues, and kicks down the door to discover that a valuable ring has been stolen, however, the broken pieces of glass were found outside – indicating that thief somehow materialized out of nowhere in a locked room and that completely threw me off. I identified the thief before it happened and even spotted the method before the room was locked-up, but I began to second guess my deductions when the theft appeared to be far more complex than I anticipated. Well played, well played.

Scattershot shows Bill Pronzini in one of his unapologetic moods, balancing a cunningly plotted and fairly clued narrative with excellent character development, which, admittedly, was not a big focus of this review, but it was done well enough that I couldn't help feel sorry for that poor gumshoe – and that made the depressing ending perhaps the only downside of this book. A very complex, but satisfying, detective story and one that I recommend unreservedly, but you might want to take a look at Hoodwink first.

All the books I reviewd by Bill Pronzini: