Murder Among Actors (1963) by Ton Vervoort

This year, I began exploring the work of an unjustly forgotten, long out-of-print Dutch mystery writer, Peter Verstegen, who wrote a handful of lightly written, but smartly plotted, detective novels during the early and mid-1960s – published as by "Ton Vervoort." Just two of his detective novels were reissued, in 1974, as part of Bruna's Zwarte Beertjes pocket series. So none of his detective novels has been in print for half a century and have since disappeared from the public's memory. And the pool of secondhand copies is beginning to dry up. 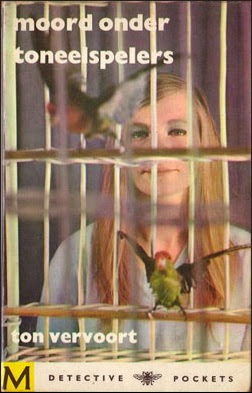 Fortunately, the copies that still float around don't cost an arm and a leg or a spare kidney, which made it both urgent and easy to begin collecting them now. Who knows how rare and difficult to obtain some of these titles will become ten years down the road. Not much gets reprinted in my country unless its fashionable or really, really profitable. That hasn't done the Dutch detective genre any favors.

So it was a pleasure to come across Vervoort's Moord onder astrologen (Murder Among Astrologists, 1963), which seemed like an interesting book to contrast with W.H. van Eemlandt's astronomical-themed detective novel Dood in schemer (Death in Half-Light, 1954).

Amazingly, the detective story centering on the pseudoscience of astrology turned out to be so much better than the whodunit staged during a minutely-timed, scientific observation of a solar eclipse. Murder Among Astrologists under promised and over delivered that came with one of those rare, Dutch-language takes on the Ellery Queen-style dying message, which I read as an open invitation to come back for seconds, thirds and fourths – revealing a top-tier, second-string mystery novelist. Having read three of them over the past few months, I've noticed Vervoort's detective series can be summed up as a bicycle tour through the genre and the Netherlands.

Murder Among Astrologists is set in the millionaire's enclave of Bloemendaal with a plot that pays homage to the zany, Ellery-in-Wonderland mysteries complete with strange architecture and a dying message. Moord onder de mantel der liefde (Murder Under the Mantle of Love, 1964) started out as a closed-circle of suspects situation in a 17th century canal house until a serial killer cut loose and goes ham on the invalids of Amsterdam. Striking everywhere from the Rijksmuseum to the rowdy Zeedijk. Moord onder maagden (Murder Among Virgins, 1965) combines a convent school setting with the festive, seasonal holiday mystery beginning with the strange death of a student playing Saint Nicholas and moved from Amsterdam to Maastricht where the story concludes during the annual, three-day carnival celebrations. Vervoort even threw in a (minor) locked room problem that doubled as a (late) clue.

So he took a different approach in plotting and storytelling in each novel that regularly
ventured outside of the Amsterdam canal belt. This certainly is true for the subject of today's review.

Moord onder toneelspelers (Murder Among Actors, 1963) is the second novel in the lamentably short Inspector Floris Jansen series and, as the title suggests, takes place among the members of a traveling theatrical company with a big role for his friend and narrating chronicler, Ton Vervoort – who gets to shine as a detective rather than as a Dr. Watson. Vervoort also falls in love here with one of the actresses, Sannah Wigman, whom he married in Murder Among Virgins. This time, it's Jansen who comes to Vervoort to ask him to go undercover as an extra in Erik Le Roy's theatrical company in a quasi-official investigation. 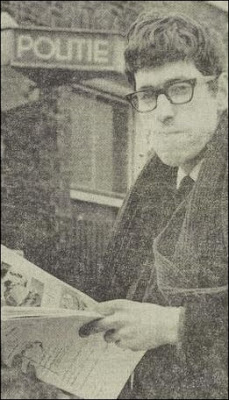 Until two years ago, Erik Le Roy was "one of the top actors who played the municipal theaters," but got too few starring roles to his liking and decided to start freelancing. A disastrous decision that reduced him to doing television bits and only turned his situation around when he began a theatrical company, which traveled "the provinces to bring art to the countryside" and claimed "principled motives" to turn down state subsidies. Although the truth is that the company doesn't qualify for state subsidies. But by doing production in-house, everything from translating and directing to lighting playing dual roles, they managed to turn a profit. Le Roy's financial success and his stance against drama schools acting as gatekeepers to the stage-lights made him popular with both actors and the always hopeful extras.

So who could possibly have a reason to send Le Roy threatening letters saying "you will die soon," "you will be dead very soon" and "it won't be long now." Jansen hopes it's a practical joke, but fears it could be a war of nerves to mentally whittle down the actor or even a murderer-to-be with plans to remove him in a more permanent fashion. Vervoort goes from Watson to independent detective ("quite a promotion") and travels with the company to Winschoten, Groningen, as an extra. But as the opening line of the story betrayed, Vervoort didn't succeed in stopping the anonymous letter writer from becoming a killer.

Someone fired two shots at Le Roy while he was driving and his car ended up in a canal, but only his passenger resurfaced and news of the incident resulted in an attempted suicide and a second murder. This is the point where the story becomes difficult and tricky to discuss.

We all dislike it when an author, or detective, plays his cards too close to his chest, but not Vervoort (the author), who boldly plunked down his cards that suggested a solution that was hard to accept – a solution that thumbed its nose at Father Knox without committing a cardinal sin. But it was so on the nose, I refused to believe it and subsequent information seemed to agree with my skepticism. Or did it? What can be said about the plot is that Vervoort performed a juggling act with multiple alibis, identities and motives to create a detective story that's halfway between an inverted mystery and a whodunit. Or did he? I can't say much more about the plot except Vervoort performed a juggling act with alibis, identities and motives to keep the reader guessing whether they're reading an inverted howdunit or a genuine whodunit. I think fans of Brian Flynn would love this mystery.

Vervoort playing bluff poker with the genre-savvy mystery reader, while playing a more than fair hand, earned Murder Among Actors a place next to Murder Among Astrologists as the strongest entries in this short-lived series. Even if the eventual explanation doesn't exactly leave the reader slack-jawed, Murder Among Actors stands as a good, old-fashioned and technically sound piece of detective fiction that makes it all the more regrettably Vervoort bowed out of the genre so quickly. My country needed a mystery writer like him!

Luckily, I still have Vervoort's Moord op toernee (Murder on Tour, 1965) to look forward to and discovered it's not a standalone novel, but part of the Floris Jansen series without Ton Vervoort as the narrator. I've also tracked down one of his short stories and want to reread Moord onder studenten (Murder Among Students, 1962), which I read and reviewed (poorly) some years ago. And have been looking into a few other, long-forgotten Dutch mystery writers. Don't worry. I'll try to smear them out as far apart as possible.