The Case of the Climbing Rat (1940) by Christopher Bush

Christopher Bush's The Case of the Climbing Rat (1940) is the 22nd novel in the Ludovic Travers series, written and published 1926 and 1968, which formed with The Case of the Flying Donkey (1939) a two-book arc and "a heartfelt tribute" to the French nation – a nation that would soon be invaded and occupied. Curt Evans noted in his introduction that the "glimpses of a peacetime world" in these Tour de Frances of Bush brought back "better and far less jaded days" when "death could still be treated as a game." This is true enough in spirit. But they also standout as unconventional in plotting and storytelling that makes them hard to recommend to anyone who isn't already a fan of the series. Something that's even more true of The Case of the Climbing Rat than The Case of the Flying Donkey. 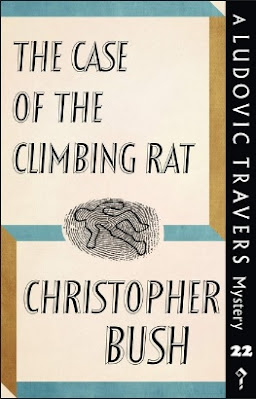 The Case of the Climbing Rat begins interesting with two, apparently unrelated, problems with one of them sending Ludovic Travers to France to confront the black sheep of the family.

Gustave Rionne is a disgraced Harley Street surgeon and the uncle of his wife, Bernice, who once made a name as "the very first plastic surgeons who really did anything worth while," but an abortion and a botched skin-grafting operation got him stricken off the list. Some of these were done while practicing under a false name, which lead to his expulsion from Luxembourg and Switzerland. Rionne went, "or escaped," to France where lived on a small pension bequeathed by Bernice's late Aunt Emily, but she warned Bernice that Rionne might begin pestering her for money, which is exactly what has happened and the second letter was horrible – raking up things and "hinting at making trouble." Travers is travels to Hótel de Sud, Carliens, to have a word or two with Uncle Gustave.

The second problem is of an entirely different magnitude: Inspector Laurin Gallois, of the Sûreté, receives an anonymous phone call telling him that the reports Armand Bariche's death have been greatly exaggerated.

Armand Bariche was, or is, a notorious slippery serial killer and not even the grisly career of Henri Landru was as "horrifying than that of Bariche." A serial killer who, unlike Landru, picked his victims from "a superior class" whose scandal-shy relatives would do everything to avoid publicity, which is why the police believe most of his victims were still unknown. Gallois believes there are likely many people "who guessed that some daughter or female relative had been a Bariche victim," but would never dare risk "scandal in their own localities." Everything the police knew about Bariche came out when he supposedly died in a fire together with his last victim. So all Galois knew about the serial killer came from words on paper and secondhand impressions, but he always believed he was still alive. And here he finally had a potential lead.

So two very different, unconnected problem concerning a pesky relative who spends too much money and the potential presence of an active serial killer in the South of France, but Gallois and Travers cross paths when Rionne is stabbed to death in a public lavatory. You can see the hardboiled influence creeping into Bush's writing with this murder, because I don't remember another detective novel from this period in which someone was murdered in a public lavatory while in "the act of urinating." Not exactly the libraries or private studies commonly associated with the classic detective story. 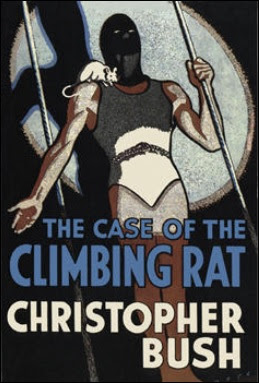 Anyway, there's a second murder of a Swiss national, Georges Letoque, who was shot and killed at the villa he rented in the Rue des Pins, which was preceded by a suspicious-looking car accident involving Gallois' secretary and right-hand man, Charles Rabaud – who was on his way to meet the anonymous informant. But the story becomes a little muddled and slower once everything has been setup. Only to become remarkably clearer in the final chapter.

The Case of the Climbing Rat is more of a rambling shaggy dog story than a normal, conventionally structured detective story with clues and suspects to examine. It more about who's exactly who or what their part in the story really is with the only constant being the possible presence of Bariche and three masked trapeze artists rumored to be either German anti-Nazis or relatives of the late Tsar. What's exactly the role of their little small white rat who, "brave as a lion," climbed the rope to the top of the tent to fly through the air with trapeze artist? Why did it refuse to climb the rope one night and died shortly after? Regrettably, The Case of the Climbing Rat is one of those novels where having France as a setting is an excuse to slacken the pace and loosen the plotting (e.g. E.R. Punshon's Murder Abroad, 1939). It's not until the last chapter that most of the loose, fuzzy plot-threads are pulled tight to reveal that there was something good and clever hidden underneath it all. Such as one of Bush's patent alibi-tricks, but some structure and substance to the middle portion would have been bigger benefit to the overall plot than a surprisingly clear and stronger ending closing an otherwise pretty muddled detective yarn.

So, yeah, The Case of the Climbing Rat is, plot-wise, not a highlight of the series and can only be recommended to readers who are already fans of Bush and Travers, but they'll be able to appreciate the dynamic between Travers and Gallois – who's a very different kind of foil than Superintendent Wharton. While they have mutual admiration and respect, there's a hint of rival-detectives between them. A plot-device not always appreciated by Western mystery writers, but Bush excellently made us of it here to give the story a good and solid ending.

If you're new to Bush and not prejudiced against cherry picking, I recommend you begin with The Case of the Missing Minutes (1936) or his home front trilogy, The Case of the Murdered Major (1941), The Case of the Kidnapped Colonel (1942) and The Case of the Fighting Soldier (1942). You can also go for some old-fashioned, Golden Age baroque with Dead Man Twice (1930) and Dancing Death (1931) or his John Dickson Carr-style impossible crime novel, The Case of the Chinese Gong (1935). I also liked Cut Throat (1932), but practically everyone disagrees with me on that one.