In the Mist of Time

"It is a capital mistake to theorize before one has data. Insensibly one begins to twist facts to suit theories, instead of theories to suit the facts."
- Sherlock Holmes (Sir Arthur C. Doyle's "A Scandal in Bohemia," from The Adventures of Sherlock Holmes, 1892)

In my previous blog posts, I reviewed Keigo Higashino's Seijo no Kyusai (Salvation of a Saint, 2008) and the fifty-second volume from the long running Case Closed series by Gosho Aoyama, which were two distinctively different works of Japanese crime fiction that were recently translated.

So, I thought, why not complete the hat trick and diminish the pile of recently published, but unread, mysteries at the same time?

That brings us without too much delay to Katsuhiko Takahashi and Sharaku satsujin jiken (The Case of the Sharaku Murders, 1983), which the Mystery Writers of Japan honored with an Edogawa Rampo Award. Thames River Press published a translation of The Case of the Sharaku Murders in 2013, but the book appears to have already fallen into obscurity, because even Ho-Ling seems to be unaware of Takahashi – and he's one of the few who isn't depended on translations. 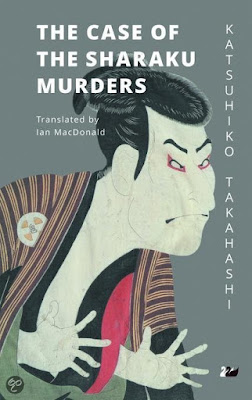 The opening chapters of The Case of the Sharaku Murders gives the impression of setting up a British-style university mystery, which begins when the body of Saga Atsushi is fished out of the ocean off the coast of Cape Kitayama – located near Tanohata in Shimohei County. Saga was a renowned calligrapher and one of the foremost authorities on ukiyo-e in the country. It was a genre/style of woodblock printing and paintings that were popular in Japan from the 17th through the 19th centuries.

Professor Nishijima was a rival of Saga and who managed to garner an unprecedented amount of influence and power in their niche-corner, which he managed to do by helping students gain positions in museums and universities – making him popular professor to have as a student aspiring to be paid one day. The vehicles of this simmering rivalry are both men are members of, Edo Art Association (EAA) and Ukiyo-e Connoisseurship Society, but despite all of this the death is filed away as a suicide and the story moves in a different direction.

A young, promising ukiyo-e scholar, Ryohei, and research assistant of Professor Nishijima becomes engrossed in the mystery of "Sharaku," who was a famous woodblock print artist and active for only ten months – between May 1795 and February 1796. Sharaku was assumed to be a Noh player, but the matter of his identity became a touchy subject in the ukiyo-e establishment in the wake of the Shunpoan Affair of 1934.

Ryohei came across a possible clue pointing in the direction of a person who could've been Sharaku, tugged away in an art catalogue that was printed in 1907, but you have to appreciate history or art to enjoy what follows. This investigation swallows up the entire middle section of the book and covers several centuries of obscure, Japanese history on woodblock printing and oil paintings – from the early 1600s to the late 19th century.

However, these scholarly enquiries are done and presented as proper and vigorous detective work. The ten month period of Sharaku's activity is used to check if figures from the era have an alibi for that period and there's an interesting takedown of multiple hypotheses that have accumulated over the decade, which includes pseudonyms of closely related figures and even an entire workshop – explaining the prolific output over a short period.

In this slow, meticulous way, a nearly 200-year-old web of relationships and cultural influence is uncovered and Takahashi densely packed it with historical background information. A reader expecting an academic mystery might get more than they bargained for and feel like they're reading a fictionalized textbook, but I think it's the best part of the story – especially compared to the overarching plot book-ending this story-within-story.

On a brief side note: this part also strangely reminded me of the historical subplot of the fleeing Revolutionary War soldier from Herbert Brean's underrated Hardly a Man is Now Alive (1952).

Upon his return from his excursion into the past, Ryohei finds himself in the middle of academic skullduggery, which leads to a fatal house fire and a tragic hit-and-run, but the slow pace really began to bog down the final half of the book.

The Case of the Sharaku Murders has an involved, somewhat ambitious plot, but the explanation doesn't pull the rug from underneath your feet and that's begins to frustrate when the story keeps retracing its own steps – filling in blanks here and there with each explanation. There's even a long, written confession by one of the persons involved explaining that persons actions in the whole case and the book didn’t end with that letter.

As explanatory plunge in obscure nook of Japan’s history, The Case of the Sharaku Murders was as interesting as the tattoo lore from Akimitsu Takagi's Shisei satsujin jiken (The Tattoo Murder Case, 1948), but, as a detective story, I feel as divided about it as Togakushi densetsu satsujin jiken (The Togakushi Legend Murders, 1994?) by Yasuo Uchida.

Well, that put a stop to that short-lived streak of positive reviews of really good mystery novels.
Geplaatst door TomCat on 6/14/2015