"With a keen eye for detail, one truth prevails."
- Edogawa Conan

The 52nd volume of Case Closed (a.k.a. Detective Conan) begins when the premiere of Star Blade VI is mere minutes away and the Junior Detective League is part of the crowd in front of the movie theatre. While waiting in line, they strike up a conversation with a fellow fan and professional photographer, but he dashes off to meet a friend after a brief phone call. And the first screening of the movie is only moments away! 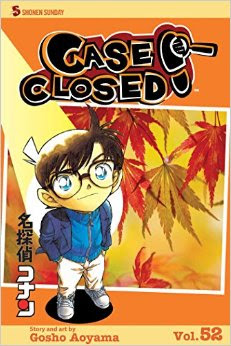 It's the shortest story from this volume, covering only two chapters, but Gosho Aoyama crafted a nifty plot, which paraded around as a calculated, inverted detective story, before revealing a why-dun-it with a heart – giving Conan an opportunity to do what most detectives only seem able to pull off at the end of a case (i.e. preventing a murder). I remember Hercule Poirot doing it in a short story from the collection Poirot's Early Cases (1974).

In any case, I loved the double-layered structure of the plot, because there can never be enough plot in a detective story. Never.

The next story comes from the Metropolitan Police Department and concerns a knife-wielding maniac in a ski mask, who brutally murdered the occupants of the houses he burgled. A young couple, engaged to be married soon, had a brush with the fiend, but escaped with their lives and home in tact. However, the burglar is a sore loser and vowed to come back for revenge. Now they have to deduce who among the wedding guests could be the murderer. It's a reasonable plotted story, but very easy to pick apart.

For the third story, Aoyama seems to have drawn inspiration from Ellery Queen's The Chinese Orange Mystery (1934) and one of the first Columbo episodes (Murder by the Book, 1971).

A successful and elderly novelist of historical fiction has murdered his ghostwriter, stolen his manuscripts and rigged up a tight alibi for himself, but a cat named Novel threatens to upset the plan and the murderer has to improvise – by turning certain items in the room upside down. Books, models cars and boxed action figures.

The explanation for the upturned items is almost too clever for a spur of the moment idea, but this devilish stroke of ingenuity was undone when the body is discovered before it was meant to. And the one who made the discovery was Conan!

Without a doubt, this inverted, Columbo-style mystery with Queenish underpinnings was my favorite from this lot, but there's one thing that bugs me. The murderer took a partially finished manuscript of a mystery novel with him, but was stumped when he tried to come up with an ending himself, which came after plotting a murder and improvising a trick that took care of the evidence that was left behind. He did that as an amateur killer. But as a writer, he couldn't come up with a somewhat decent ending? Well, I guess that's why he needed a ghostwriter.

The final story, covering three chapters, began promising, but fell apart in the final stretch of the story. Conan, Rachel and Serena are scouring a maple grove in search of a red handkerchief. A popular TV drama made the area a popular tourist attraction and fans are flogging the grove, which can be witnessed by the many handkerchief tied to the branches of the maple trees – an important plot-point from the TV series. Naturally, there's something sinister about that first tree with the red handkerchief and the body that was found in the woods, but I didn't care about the ending. Or the deus ex machina that brought it about.

The final score: two good stories (first and third), one average (second) and one bad (last one). Not a bad score.

I'll return presently with a regular review and I hope the two impossible crime novels I ordered will arrive somewhere this week.
Geplaatst door TomCat on 6/08/2015