"...so you can put that in your pipe and smoke it, Mr. Busybody Holmes."
- Mr. Williamson (Sir Arthur Conan Doyle's "The Adventure of the Solitary Cyclist," from The Return of Sherlock Holmes, 1905)

In late April of this year, I reviewed The Studio Crime (1929) by Ianthe Jerrold, which was the first of only two mystery novels she penned about John Christmas. That genial, conjecture-prone and enthusiastic amateur sleuth.

The Studio Crime was in spite of a disappointingly handled locked room angle studded with promise, standing confidently by itself among other apprentice works from the period, but it's its sequel, Dead Man's Quarry (1930), that's been called a genuine lost classic – and I agree. 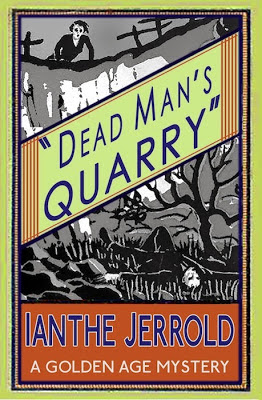 Dead Man's Quarry is set in the Wye Valley in the Hereford-Wales borderland, known as the Welsh Marshes, which is dotted with the familiar imagery of the British countryside: tiny villages, rustic cottages and ancestral homes. Dr. Browning is exploring these parts during a bicycle holiday together with his family and some friends. The party consists of his young, adolescent son, Lion, who could've strayed from the pages of a Gladys Mitchell novel. His sister, Nora, has brought along a friend from art school, Isabel Donne, and there's a photographer, Felix Price, alongside with his cousin, Sir Charles – who recently returned from Canada to inherit the family title and Rhyllan Hall.

Upon his return, Sir Charles presented himself with a cavalier attitude and that hasn't made him very popular, which is a sentiment punctuated when his battered body is found at the bottom of a disused quarry. Shot through the back of his head. There's an equally battered bicycle lying next to the body.

At the coroner's inquest, Morris Price, manager of the estate, is indicted for the murder of Sir Charles and jailed to await trial, which was based around a letter speaking in less than glowing terms about Sir Charles and his revolver was discovered to be the murder weapon.

Luckily, John Christmas stubbornly refuses to the settle with the apparent cast-iron facts for an easy answer and drags his scientifically minded friend, Sydenham Rampson, across the countryside to hunt for an alternative explanation – and clues, of course. Rampson proved to be a better character for Christmas to play off than Detective-Inspector Hembrow from The Studio Crime. On the one hand, you have Christmas, who prefers to construct sky castles from the broad characteristics of the case and see if the underlying facts will support the structure, while Rampson prefers to search for answers through the lens of a microscope.

There's an abundance of seemingly unconnected facts getting the full brunt of Christmas' imagination, which range from five pound notes, egg shells and a green bicycle pump. There's also a mysterious woman who keeps appearing and there's a large, interestingly cast of characters populating the area to be questioned. But, as Rampson observed, "never forget that apparently disconnected facts are often actually disconnected" and that's "far, far more often than Mr. Sherlock Holmes and Mr. John Christmas seem to imagine."

It's this pure, unadulterated detective work in combination with a humorous, light-hearted tone, well drawn characters and an excellent constructed plot that made Dead Man's Quarry a pure delight to discover. I'm therefore especially proud at how fast I caught on to the identity of the murderer, but (it must be said) the plot does owe something to a certain Sherlock Holmes story. Finally, I want to point out how the combination of the Welsh backdrop, outdoors activity, Sherlock Holmes references and plotting style reminded me of Glyn Carr – who penned several mysteries set in the mountains of Wales (e.g. Death Under Snowdon (1952) and Death Finds a Foothold, 1961). I wonder if Carr was aware of this book and if it influenced him in any way.

Dead Man's Quarry is a mystery novel that gives credence to our claim that we're currently living in a Renaissance era of detective fiction and kudos to Dean Street Press for rescuing this one from biblioblivion.
Geplaatst door TomCat on 6/02/2015