"An armed society is a polite society."
- Robert A. Heinlein

I had planned Ianthe Jerrold's Dead Man's Quarry (1930) as my next read, but, once again, got sidetracked. However, I hope to read it somewhere around the weekend. So a review is coming!

In the meantime, I dipped into the twelfth entry in the Bureau Raampoort-series: Een schim in de nacht (A Shadow in the Night, 2015). The series was co-created by Simon de Waal and Appie Baantjer, but the former had to continue solo after Baantjer passed away in 2010. 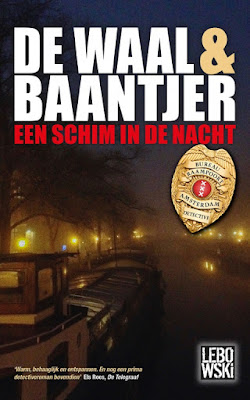 A Shadow in the Night begins when summer is finally on the horizon and evenings are slowly growing longer, which draws a veteran of the Amsterdam police, Peter van Opperdoes, from his home and into his favorite café – to enjoy coffee and apple pie. It's a quiet, peaceful moment broken by the sound of gunfire emanating from the nearby Noordermarkt.

Van Opperdoes finds a mortally wounded man, recipient of several bullets, who clings to life long enough to mutter these cryptic last words: "ik was het zelf" ("I did it myself"). The nature of the bullet wounds and the absence of a firearm on the body makes suicide unlikely, which is confirmed when a gun and shell casings are found a considerable distance away from the body. But then what did the victim mean that he did himself? Jacob thinks it was simply the incoherent ramblings of a dying man, but their inquiries soon open new avenues of investigation.

The identity of the victim is confirmed when his twin brother reports him missing, which gave Van Opperdoes and Jacob quite a fright in the beginning – as they were confronted with him just after bringing the body to the morgue. I was hoping the body would disappear from mortuary, but this is a contemporary, Dutch politieroman and not a John Dickson Carr novel from the 1930s.

Ideas of mistaken or swapped identities was entertained, but the eventual solution ran in a different direction and was stamped with De Waal's trademark signature: professional underworld figures, small-time, petty criminals and other, enterprising persons operating in the gray areas of the law, who always seem to lurk in one place of a story or other. There are several kinds of them in this story and there's professional in a short, separate story line and a second, unnecessary murder for the story – one that's solved after discovering the crime-scene was stuffed with hidden surveillance cameras that recorded the murder.

There are some petty crimes and criminals involved in the first shooting, but the explanation yielded an unexpected surprise, which was only (somewhat) foreshadowed in the characterization of the people involved. But the surprise was welcome! Unfortunately, the "dying message" was just a red herring to mystify rather than a clue to the identity of the murderer. As Jacob remarked, "it would saved us a lot of hassle if he simply had said (...) had shot him."

Interestingly, the final parts of the book were apparently penned with a deadline looming ahead, because Van Opperdoes figures out the case while watching footage of the Baltimore riots on TV. Yes. There's something in footage that helps Van Opperdoes to grasp the explanation.

All in all, a good entry in this series of police procedurals, but the best part remains how Baantjer has been kept alive through De Waal's storytelling and Van Opperdoes' character – which is simply nostalgia for me. It was Baantjer who introduced me to the genre and I sometimes miss those heretical days when I used Agatha Christie to bridge the time between the releases of his books.
Geplaatst door TomCat on 5/29/2015