"There is a tide in the affair of men. Which, taken at the flood, leads on to fortune."
- Brutus (William Shakespeare's Julias Ceasar, c. 1599)

The title of Paul Doherty's eight Sir Hugh Corbett mystery, Song of a Dark Angel (1994), is the name locals of Hunstanton Bay have given to the cold, howling wind blowing across the Wash – a large, inland sea in the Norfolk countryside. Reputedly, the small, sleepy fishing village is the final resting place of many old, nearly forgotten secrets. 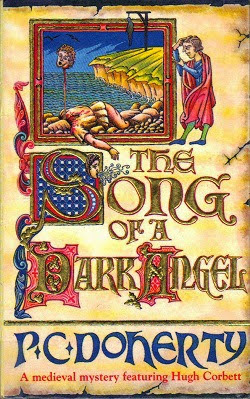 It's November, 1302, when King Edward I of England dispatches Sir Hugh Corbett, Keeper of the Secret Seal, and his loyal friend and companion, Ranulf-atte-Newgate, to this "dark, sombre place."

On a cliff top, a local woman was found swinging from the scaffold. On the beach below lay the remains of a decapitated man. The head was impaled on a spike and planted next to the corpse, but the sandy terrain surrounding both bodies showed no signs of disturbance – aside from those that could be attributed to the victims.

Regrettably, the impossible nature of both crimes remained tiny cogs in the machine of the plot, but, considering their simplistic explanations, that may've been for the best. You should be able to figure out how the hanging was done and make a good guess at the second one, but Song of a Dark Angel is definitely not a full-blown locked room mystery.

Song of a Dark Angel is better described as a grim, medieval village mystery with enough background noise to keep both Corbett and the reader continuously distracted from the first two murders.

First of all, there are the Pastereaux, a religious sect, who are preparing for the return of Jesus Christ and ship off the converted to Holy Land. Old grave sites are being desecrated and light signals have been witnessed along the coastline, but a far more imminent threat came from the villagers after another local girl, named Marina, was found raped and murdered on the moors – which gathered an angry, pitchfork-mob around an elderly lady and her son. The woman is known locally as a witch and even the ducking stool is pulled out for this portion of the story.

However, my favorite plot strand, woven through the others, involved King Edward's actual motives for sending Corbett to a desolate place for an apparently routine investigation. A reason that harked a century back into the past, which were the days of Edward's grandfather. King John of England is best known today in popular fiction as the arch-nemesis of Robin Hood, but in his day he was responsible for losing the French territories, probably murdered a rival claimant to the throne and caused a baronial revolt that led to Magna Carta – "The Great Charter of Liberties."

As the story goes, King John "spent most of his reign fighting his barons, moving around the country, trying to bring this earl or that lord into submission," but during a crossing of the Wash he lost something rather valuable. This lead to a fun, but deadly, treasure hunt a hundred years later. What I loved about this plot strand is how it really gave a deeper sense of time-and place to the story, because it's not just a story set in the early years of the 1300s. It was set in a place with a history. A place where the Vikings once landed and the Danes invaded, but it was as ancient history as the events from the days of King John and seemed as distant to them as 1915 does to us.

Overall, Song of a Dark Angel is a well-written historical novel and a fairly honest plotted detective story, which kept (for Doherty) a surprisingly balanced body count, but the setting was deserving of a grander story. I did enjoy most of the plot, but I have seen better from this series in only the handful of titles read thus far. However, that probably won't stop devotees of the series and historical (crime) fiction in general from enjoying Song of a Dark Angel.

The Sir Hugh Corbett Mysteries reviewed on this blog: