On Matters of Grave Concern

"Though everything will seem dark to you now, remember that even behind the darkest clouds of night there shines the moon of dawn."
- (Robert van Gulik's "The Wrong Sword," from Judge Dee at Work, 1967) 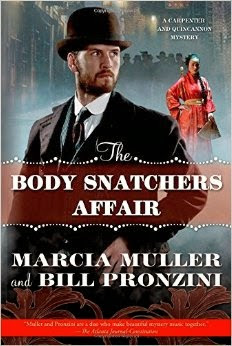 In 2011, I announced on my blog that the William Roos and Aubrey Kelley of our time, Bill Pronzini and Marcia Muller, were collaborating on a series of novels starring the duo of gumshoes operating in the San Francisco of the late 1890s. The Bughouse Affair (2013) and The Spook Lights Affair (2013) were the first to appear and The Plague of Thieves Affair (2016) is slated for release early next year, but first let's take a look at The Body Snatchers Affair.

The lion's share of The Body Snatchers Affair is modeled around the plot of a short story, "The Highbinders," from Carpenter and Quincannon: Professional Detective Services, in which the body of a Tong leader, Bing Ah Kee, is unceremoniously snatched from his coffin – a potential triggering move for a small-scale civil war on the streets of Chinatown.

Quincannon is hired to fetch a drug-addicted lawyer, James Scarlett, from an opium den, but his half conscious quarry is fatally shot while attempting to carry him out of the Chinese Quarters. The last words Scarlett uttered, "blue shadow," amounts to a dying message, however, the explanation for this part of the plot is the same as in the short story. So it won't yield any surprises, if you've read and remember that particular story, but a good and interesting expansion nonetheless.

While Quincannon attempts to quell a rising fire in Chinatown, Sabina Carpenter has one or two problems of her own to take care of, one professional in nature and the other personal, but in both cases she tries to keep Quincannon in the dark as much as possible.

The professional problem concerns a client of hers, Mrs. Blanchford, who received a $75,000 ransom note for the return of her late-husband's remains. Mrs. Blanchford's husband was interred in the family mausoleum and the door can only be opened with a key that was in a safety-deposit box inside a secured bank building, but the note contained Ruben Blanchford's wedding ring and a piece of satin cut from the lining of a casket.

It's completely impossible to enter the solid looking, family crypt and take away the body, but the casket proved to be indeed empty upon inspection – which is what is being carefully kept from Quincannon. Sabina knows he would insert himself in her investigation, because Quincannon "fancied himself an expert on that sort of mystery" and wants to solve this locked room case herself. If, like me, you fancy yourself a student of the Grandest Game in the World (the obligatory John Dickson Carr reference) then the disappearance from the crypt won't pose much of a challenge for you, but that doesn't make withholding an impossible problem from a locked room enthusiast any less reprehensible. That's like taking painkillers from a sick person. You just don't do that.

However, I enjoyed how the two seemingly unrelated cases of body snatchings dovetailed with each other without actually being intertwined.

The personal problem begins with Carson Montgomery, a metallurgist, who's vying for spot coveted by Quincannon, but Sabina (a former Pink Rose operative) has always been resistant to male advances (especially Quincannon's) ever since losing her husband in the line of duty. Just when Sabina thinks Carson may be the new man in her life, she notices an old, familiar face is watching them. The crackpot who claims to be Sherlock Holmes, first appearing in The Bughouse Affair, has been shadowing them and this eventually leads to a mining scandal from a decade ago and an (unsolved) murder in the background. But more importantly, it casts an interesting light on the bughouse Holmes and his possible role in the next novel.

My theory: the twist is that the bughouse Sherlock Holmes was Professor Moriarty all along, who thought Quincannon was the actual Holmes in hiding and that gray-flecked, bootleggers beard one of his disguises. The Plague of Thieves Affair could be a hint at Moriarty's next big caper.

Conclusion: The Body Snatchers Affair has everything what you've come to expect from Pronzini and Muller, but be warned, the book contains material that readers who were onboard with series before 2013 are already familiar with. That being said, I can't wait for the release of The Plague of Thieves Affair. I'm sure it'll contain another impossible problem or two.
Geplaatst door TomCat on 5/13/2015