"If we're going to get to Mars, we're going to have to clear the maps. The dragons, Cyclops, and other monsters of the mind must be killed, and the siren exposed for the fraud she is."
- Robert Zubrin (The Case for Mars: The Plan to Settle the Red Planet and Why We Must, 1996)

Manly Wade Wellman was, what you would call, a "fictioneer" and his bibliography covers a multitude of genres, which range from fantasy and horror to science-fiction and detective stories – raking in several awards along the way, e.g. World Fantasy Award and Edgar Allan Poe Award. 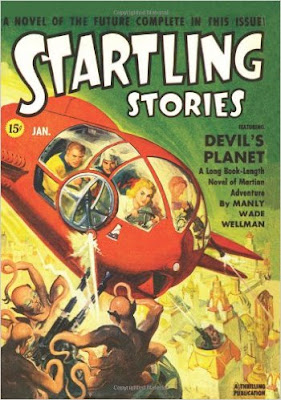 I previously reviewed two stories from Wellman's body of work: an impossible crime novel with a hardboiled edge, entitled Find My Killer (1947), and a short story, "A Knife Between Brothers," collected in The Black Lizard Big Book of Locked Room Mysteries (2014).

It's purely coincidental that both tales are listed in Locked Room Murders (1991), but the subject of this review, Devil's Planet (1942), apparently escaped Robert Adey's attentive eye. That's a shame, because it's an efficacious example of the science-fiction/mystery hybrid and predates Isaac Asimov's The Caves of Steel (1954) by more than a decade – which is considered to be the prototype for these type of genre-benders.

Devil's Planet was originally published as a book-length novel in Startling Stories and takes place on the dry, parched surface of a dusty, drought-stricken Mars in the 30th century. And that's more than 900 years in our future!

The protagonist of the story is Dillon Stover, who grew up on the laboratory farm of his late grandfather in the Missouri Ozarks, but has recently inherited both a small fortune and a mission from the old man: perfecting the condenser-ray to make rain possible again on the thirst-choked planet. But, before he can get to work, Stover visits Pulambar, "the Martian Pleasure City," which is the last place on Mars with lakes, canals and a well of trouble!

Mace Malbrook is one of the (main) oligarchs presiding over Mars and the foundation of their rule is a tight grip on the water monopoly, but the first encounter between Strover and Malbrook ends with the former clipping the jaw of the latter – giving Malbrook an opportune excuse to get rid of Strover through a crooked duel. 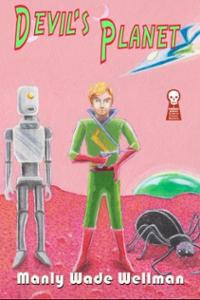 News of the altercation and possible duel between the two spreads, which makes Strover the prime-suspect when Malbrook dies in a mysterious explosion behind the locked door of his private and fortified room. A dying Martian, Prrala, was with Malbrook when the explosion occurred and claims Strover appeared in the room, while he was actually on the outside of the room.

However, Prrala's final words are enough for Chief Agent Congreve of the Martio-Terrestrial League Service to place Strover under arrest, but that’s when the story really begins to move. Strover manages to escape from both the prison and the city. Nearly dies in one of the sun drenched deserts of Mars. Returns to the city and dons an ancient disguise to examine the scene of the crime, while dodging an eager murderer with an expending body count.

Wellman adroitly blended fast-paced story telling with a well thought out plot and encapsulated all of these different elements in a new and fascinating world, which only seems to have one drawback: this universe appears to have stagnated, culturally and technologically, after the 20th-and 21st century, because there are references to "an ancient but most readable work," known as Alice in Wonderland, and the New York theatrical world of the twentieth century, but nothing more recent than that. The technology is unimpressive for a story that's set a millennium from now on a nearby planet, which is exemplified in the clunky, simplistic robot servitors trudging around the story.

Plot-wise, a seasoned mystery reader should be able to piece together the identity of murderer and motive together, but the method for the locked room explosion deserves a nod of acknowledgment, because it's clever and reasonably well clued. I wonder if the idea for this trick and futuristic locked room scenario came to Wellman after reading [SPOILER: Nine Times Nine (1940) by Anthony Boucher].

Anyhow... if this poorly written review has made you curious about this exemplary specimen of a hybrid mystery, you can pick up a copy of Devil's Planet from both Adventure House and Ramble House.
Geplaatst door TomCat on 8/05/2015