"Arsène Lupin is a delicate, squeamish burglar. He loathes bloodshed, he has never committed a more serious crime than that of annexing other people's property... And what you're saying to yourself is that he is not going to burden himself with a useless murder. Quite so."
- Maurice Leblanc (Arsène Lupin in "813," 1910)

The 53rd volume of Case Closed, known better in some parts of the world as Detective Conan, opens with the longest story in this installment and concerns Kaito KID's latest caper – or so it appears. 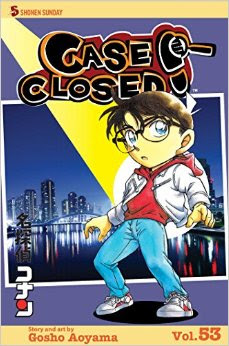 Takeyori Oikawa is a renowned artist responsible for a series of paintings depicting the "beauties of nature," which is one canvas removed from being a complete set. The fourth and final picture in the series is about to be unveiled, but in a note the infamous, white-clad thief promises to swoop down from the moonlit sky and scoop up the freshly painted masterpiece.

As a precaution, Oikawa takes the only security measure that helped in the past against the sticky-fingered magician: the presence of a certain detective, named Richard Moore, and the little brat who's always tagging along. However, the great "Sleeping Moore" and Conan are unable to prevent the painting from disappearing from a semi-locked and guarded room, but there's a bigger problem – KID may've broken his own code and taken a life during the heist.

Of course, this isn't strictly speaking a Kaito KID caper, but a Columbo-esque inverted story that's well motivated and clued. A locked room-style trick is used to create an alibi and to round out a solid plot, which makes this my favorite story from this bundle. The actual presence of KID in the background is merely an added bonus.

The next story covers only two chapters and is what Bill Pronzini would've called a "humanist crime story," even though there is no (real) crime in the story. What makes it a humanist story is the motivation behind a game of code cracking that Ms. Koboyashi created for her students in Class B-1 and that's all I can really say about this revoltingly adorable story.

A note for the curious: there's a note in the story signed with "The Fiend with 200 Faces," which is a reference to Edogawa Rampo's Kaijin nijuu mensou (The Fiend with Twenty Faces, 1936). The book was published in English in 2012 and has an introduction written by our fellow Connoisseur in Crime, Ho-Ling.

In the third story from this volume, a young boy comes to the office of Richard Moore with a peculiar and cryptic story of having witnessed a crime around New Year. The kid saw a man throw a body from a bridge in the river and the identity of the victim may be that of a missing rock star, but the account of the boy is reads like cipher – which includes allusions to "a scary picture of a nail" and "a big shining hammer."

The objective of this story is not so much the who-and whydunit angle, but retracing the steps of the child and making sense of his cryptic remarks, while the shadow of the Black Organization hovers in the background. And the possible connection between the B.O. and the apparently clumsy Eisuke Hondo, who keeps hanging around Conan and Moore.

The final chapter of this volume is a set up of a story that'll be concluded in the next volume and begins when Eisuke brings a case to Moore's office that bears a striking resemblance to "The Red-Headed League" from Sir Arthur Conan Doyle's The Adventures of Sherlock Holmes (1891). This quickly leads them to the scene of a murder and Conan again feels the presence of the Black Organization, but that's a story for the next volume.

So, all in all, a fine collection with a solid opening story and some interesting side-developments concerning the main storyline and recurring characters.

I'll be back ASAP with a regular review. Probably a locked room mystery from Japan. Who knows!
Geplaatst door TomCat on 8/10/2015