"These writers (with others like them) are the aristocrats of the game, the old serpents, the gambit-devisers and trap-baiters whose strokes of ingenuity make the game worth playing at all."
- John Dickson Carr ("The Grandest Game in the World," from The Door to Doom and Other Detections, 1980)

In late June of this year, John Pugmire's Locked Room International published a translation of a landmark mystery novel from the land of the rising sun, Yukito Ayatsuji's, Jukkakukan no satsujin (The Decagon House Murders, 1987), which is credited with launching the neo-orthodox (shinhonkaku) movement – and putting an end to the dominance of the socially conscious crime novel. If only that would happen over here in the West. 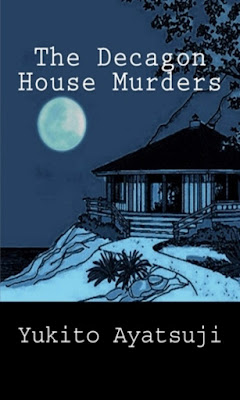 The Decagon House Murders was translated by our very own tour guide through the largely uncharted territory of the Japanese mystery novel, Ho-Ling Wong, who also wrote a postscript on the Kyoto University Mystery Club. They stood at the cradle of this movement and a thinly disguised version of the club (and its members) figure prominently in the book.

A short introduction on the neo-orthodox movement was penned by Soji Shimada, author of that bloody tour-de-force known as Senseijutsu satsujinjiken (The Tokyo Zodiac Murders, 1981), and sandwiched between the introduction and after word is the answer to an all-important, but rarely posed, question: what do you get when you populate Agatha Christie's And Then There Were None (1939) with the type of characters from Peter Lovesey's Bloodhounds (1996)?

Tsunojima is a small, deserted island off the coast of Japan and would've simply been one of the many, undistinguished rocks in the island nation if it weren't for the burned down ruins of a mansion and decagon-shaped house – which where the scene of a gruesome, quadruple murder case less than a year before the opening of the story.

So it goes without saying that the island is the perfect location for an excursion for the members of a certain university mystery club.

The club-members are known throughout a majority of the story by their adopted nicknames: "Agatha," "Carr," "Van Dine," "Ellery," "Leroux," "Orczy" and "Poe," which are, of course, names of famous mystery writers from the past – primarily from our Golden Age. One of them was exposed in the prologue to harbor plans to commit a small-scale massacre on the island, but the letter promising five victims, a detective and a killer at the end of their stay is taken as a joke or attempt at setting up a murder game.

There are also letters circulated to club members on the mainland, which pertain to tragedy that took place on the island several month ago and a death related to the mystery club itself.

From this point on, the narrative alternates between the mainland investigation into the past murders and the rising body count on the island in the present. The former poses some interesting questions: why did the murder take several days to murder three or four people? Why was the hand of one of the victims severed? Where's the gardener who disappeared after the murders? Why do the current series of murders on the island tend to mimic the ones from the past? 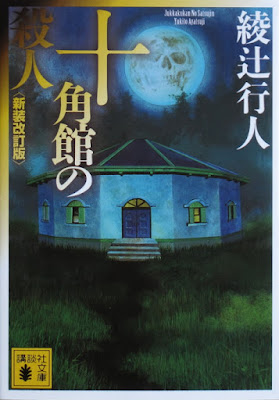 My exposure to Japanese mysteries have mainly come from comics (manga) and some cartoons (anime), such as Case Closed and The Kindaichi Case Files, but you can easily see how the neo-orthodox movement influenced even that specific branch of mystery fiction. There's the cast of high-school or university students in a remote, isolated location with a dark crime in the past and a murderous avenger in the present, which is also pretty much a basic plot synopsis of every Kindaichi story. Perhaps the best example comes from an animated series, Detective Academy Q, which has several episodes forming The Kamikakushi Murder Case and has arguably the best use of bizarre architecture – alongside several seemingly impossible disappearances. I should re-watch those episodes one of these days and review them here. They were really clever.

However, as interesting and gratifying as the unapologetic attitude as an anti-modern crime novel might be, The Decagon House Murders has one or two flaws that you might expect from a debut novel – even from a (re)debut of an entire genre.

The plot is furnished with all the classic trappings of a Golden Age mystery, but the clueing is sparse and you need experience, combined with some intuition, to make a stab in the right direction. You can't really play the clever and smug armchair detective, as the story begins to unravel, but the only real drawback for me was that the story lacked an impossible crime! There were none! Absolutely zero! And this book was published by Locked Room International! Shocking, Watson! Shocking!

Anyhow... considering what The Decagon House Murders has done for my beloved, classically-styled detective stories in the East, as well as being an incredibly fun book to read, I was more than willing to look pass these minor flaws. And I'm very grateful to both Ho-Ling and Pugmire for tossing this one over the language barrier. May it be the first in a long row!

Finally, the legacy of The Decagon House Murders gives me an opportunity to say to (the memory of) Julian Symons what should've been said a long, long time ago: in your face, you dry-mouthed fairy!
Geplaatst door TomCat on 8/11/2015