I think every long-time mystery reader has one, or more, pet tropes and trappings that draw us in like moths to a flame. Some of you might have noticed my excessive interest in impossible crime fiction or World War II period mysteries compounded by an incurable curiosity for the obscure and arcane, but not every trope or trapping lends itself to indulgence – like the frustratingly rare archaeological detective story. Two of the most well-known examples of the archaeological mystery novel are R. Austin Freeman's The Eye of Osiris (1911) and Agatha Christie's Murder in Mesopotamia (1936). More recently, I found three short stories, Charles B. Child's "The Thumbless Man" (1955), MORI Hiroshi's "Sekitō no yane kazan" ("The Rooftop Ornaments of Stone Ratha," 1999) and Simon Clark's "The Climbing Man" (2015), but it remains a shallow pool to draw from. 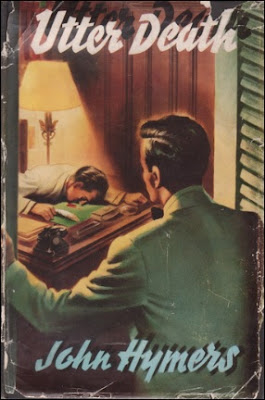 So, whenever I come across one, I take special notice and usually end up adding them to the towering, semi-sentient monstrosity that's my stack of unread detective novels. And that brings us to the subject of today's review.

John Hymers is even more obscure and little-known than his only, practically forgotten, contribution to the genre, Utter Death (1952), which brings the reader to the Cairo of the immediate post-war period where an utterly bizarre murder is committed among the members of a small, decaying British Colony – set against the skulduggery of an archaeological dig in the sand hills. So that was more than enough to get my attention, but who was John Hymers? Why has he has been so thoroughly forgotten today? Even lacking his own GADWiki entry.

None of the John Hymers found online seem to fit the timeline in which they could have written Utter Death, but there was a notable, 19th century English mathematician of the same name. So our Hymers could have been a relative carrying on the family name or a mathematician himself who simply picked the name as pseudonym. There might not be a link at all. I simply don't know. Not for sure, anyway, but I can make a tenuous guess as something struck me while reading Utter Death. A story with a little more than a passing resemblance to the early 1960s novels from a husband-and-wife team, Gordon and Vicky Philo, who wrote some magnificent mysteries together as "Charles Forsyte." Utter Death struck me as a very rough, unpolished attempt at the type of detective novels they would so expertly craft a decade later. You can even go as far as saying they pillaged Utter Death and refurbished the material as frameworks for their 1960s mysteries.

For example, the murders in Utter Death and Diplomatic Death (1961) share some resemblance in presentation and their reliance on stage-magic and misdirection. Diving Death (1962) shares its archaeological backdrop with Utter Death, but former takes place in the muted, two-color world of the seabed and the latter on the sun-scorched sands of Egypt. The setting of an isolated group of British characters in the Middle East is at the heart of both Diplomatic Death and Murder with Minarets (1968). Also note the similarity in choice of book titles.

I know I'm probably wrong here and the huge disparity in quality between Hymers' lightly plotted, second-string Utter Death and the Forsyte novels stands as a solid counter argument, but then again, that could have been the reason why they never acknowledged or claimed it – which has one point in its favor. Gordon and Vicky Philo began working on Diplomatic Death sometime during the 1950s, which had to be rewritten multiple times before finally being published in 1962. So, time-wise, it's not entirely out of the realm of possibilities Utter Death was an early, flawed attempt at the detective story that made it to print. But ended up being embarrassment when the Philos produced a better written, solidly plotted and more polished series of detective stories. This is nothing more than a guess, but there such a thing as a lucky guess. So who knows. Now let's get to the story at hand.

Utter Death takes place some three miles to the south of Cairo in Mansiut, a so-called "garden city," where stucco villas, green lawns and avenues of poinsettias arose from "the mud which for centuries has been so generously left by the Nile" when a British Colony settled it. The result is not so much a garden as an exclusive, isolated island surrounded by deserts, rice fields and the river with no post office or shops. So you had to be "sufficiently affluent" to own a car to ride into Cairo, if you want to live in Mansiut. A small, dwindling remnant of the Colonial administration and it's social strata try to carry on there as old traditions have all but disappeared and the disillusioned diehards wonder why they ever handed the administration of the country back to the Egyptians. So a holdover from a previous era, but normally a pretty quiet, peaceful place that ends when the excavations begin.

Professor Maurice Selborne is a rising name in the world of Egyptology who's a notoriously difficult and unpleasant person to be around. A bit of an autocrat who's very protective of his excavation sites, which means practically nobody is allowed to come anywhere near. Somebody ignored his wishes! Professor Selborne has been excavating a hillside passageways close to an ancient temple where they have come across several chambers. However, the chambers were empty when they entered it, "not so much as a gold coin lying around," except for the paintings and carvings covering its walls. The odd thing is that they found the centuries old seal on the outer door intact, but the seal on the second door had been broken not so long ago. Yes, Hymers teased a locked room mysteries that unfortunately never materialized. But that's not all!

Someone has been sending Professor Selborne "Pharaonic messages" that can construed as death threats ("for the name of the god who ruleth here is Utter Death") and two workman have died violently on the job. But it neither frightened the archaeologists or put a stop to the excavation. Professor Selborne actually appears to be "playing a game of his own," as "if he had something up his sleeve," while being very keen on keeping the authorities out of his business. All they really know about Professor Selborne is that "he's unfaithful to his wife, is hated by his workmen and has been receiving anonymous warnings" which might be linked to "the present tomb he's excavating" – an explosive cocktail that ends in murder during a social gathering. Professor Selborne's body is found shot to death in his study, slumped over his desk, holding a half-crushed quill pen and a broken pieces of a vase scattered on the ground. The murderer also snatched something from the wall. Enter the Hercule Poirot of the Middle East, Inspector Zaky Bey of the Cairo Police.

Regrettably, there really is not much else that can be said about the story. Utter Death is a genuine enough detective novel, but has a plot as thin and fragile as finely-spun glass with a clumsy, amateurish grasp of clueing and misdirection. It kind of works as a detective story, but not a very good one. Only aspect of Utter Death that really stands out is its depiction of post-war Egypt and the social upheaval following Egyptian independence, which is more fairly put down than the old-world rumblings from the British quarters suggests. Another reason why the Philos could have written it, because they were British diplomats living and working in the Middle East at the time. It would explain why the scenery, social backdrop and some of the characters are so much much better realized than the plot. Even that was almost ruined towards the end with a very bad scene that could have been plucked from the yellowed pages of an opium-fueled, pot smoke filled pulp magazine story.

So, yeah, Hymers' Utter Death is more or less a repeat of my recent encounter with B.J. Kleymens' In de greep van de kreeft (In the Grip of the Lobster, 1965) with the question "who wrote this" proving to be more interesting than what they wrote. Not recommended unless you have a craving for the utterly obscure or intrigued by the potential mystery of Hymers' identity.

Sorry for the poor, sloppier than usual review, but it was a struggle to pad out this post into something resembling a proper review and will try to pick something less risky for the next time.