Set in Stone: "The Rooftop Ornaments of Stone Ratha" (1999) by MORI Hiroshi

Hiroshi Mori is a Japanese engineer who reportedly started writing detective stories when he was an associate professor, at Nagoya University, to impress his mystery-reading daughter and his debut, Subete ga F ni naru (The Perfect Insider, 1996), netted the first-ever Mephisto Prize – a Sherlock Holmes statuette awarded to unpublished genre fiction. Some of its recipients formed a publishing group in 2012, The BBB: The Breakthrough Bandwagon, to make their work available in English. 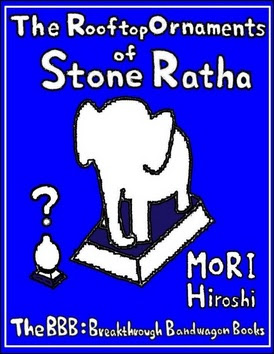 One of the members of The BBB is the subject of today's review, Hiroshi Mori, who insists his name to be written "MORI Hiroshi," family name first and in uppercase, regardless of the language. So I will refer to him as MORI from here on out.

The BBB translated and published seven of MORI's detective stories, collected in the appropriately titled Seven Stories (2016), which comprises of five standalone stories and two from the "Professor Saikawa and his student Moe" (S&M) series. But you can also buy the stories separately. So I decided to sample MORI's writing with a short story combining the armchair detective story with an architectural conundrum from 7th century India!

"Sekitō no yane kazan" ("The Rooftop Ornaments of Stone Ratha," 1999) is one of two S&M stories currently available in English and MORI obviously wrote it as an homage to the Black Widower series by Isaac Asimov.

The premise of "The Rooftop Ornaments of Stone Ratha" is the monthly gathering of young detectives belonging to the First Investigation Division, of the Aichi Prefectural Police, at Moe Nishinosomo's residence to discuss their cases – which came to be called "The Banquet of the Black Windows." A reference to both the "huge black windows" in the living room of the apartment and Asimov's The Banquets of the Black Widowers (1984). However, the monthly gatherings were becoming repetitive and Professor Saikawa is asked to come to the next meeting with an interesting topic. What he brings is "a case that is not a usual case," which is "a mystery that is not a usual mystery."

Forty years ago, Moe's father, Dr. Nishinosomo, took part in large-scale surveys of Indian temples and focused his attention on "the so-called rock-cut cave temples." A type of monolithic architectural structures cut, carved and chiseled from "a single slab of rock" that left "completely independent, free-standing structures." A peculiarity of these ancient, rock-cut structures is that they were carved out of the rock top to bottom. During one of these surveys, Dr. Nishinosomo stumbled across an architectural anomaly.

Usually, these rock-cut structures are found in the deep mountains or sheer seashore cliffs, but a group of five stone pagodas, called Five Ratha, were found relatively close to a town and they were all made from a "giant, single rock" – all were connected to the same rock on the ground. So the location of these stone pagodas alone is enough to raise some eyebrows, but what's truly inexplicable is that the carpenters carved the finials, which is supposed to adorn the top of pagodas, some two meters away. As if they were "out of the ground like a plant."

These rock-cut structures were made top-to-bottom, meaning that the carpenters should have started with the finials, but why they were carved is a complete mystery.

A neat little historical puzzle with a simple, logical and, admittedly, a pretty mundane explanation, but the strength of the story is not in the answer. It's in the procession of incorrect answers, or false solutions, preceding it. Everyone in attendance gets to take a crack at the problem and their proposed solutions vary from the logical, or practical, to being drenched in the romanticized intrigues of history – which should delight fans of Anthony Berkeley and Ellery Queen alike.

So, all in all, I found "The Rooftop Ornaments of Stone Ratha" to be a fascinating blend of the armchair detective story and historical mystery, but it's a fairly minor detective story that will not satisfy everyone. Personally speaking, I wish there were more armchair detective stories pondering over these obscure, mysterious passages from history. You can definitely expect MORI to return to this blog sometime in the future.
Geplaatst door TomCat on 9/12/2020