Anthony and Peter Shaffer were twin brothers, celebrated playwrights, screenwriters and novelists with three revered, frustratingly rare and highly sought after detective novels to their name that have gained an almost mythical reputation over the decades – ensuring a small circulation among collectors. Two of the three novels have vainly topped the wishlists of impossible crime fans for nearly seven decades. 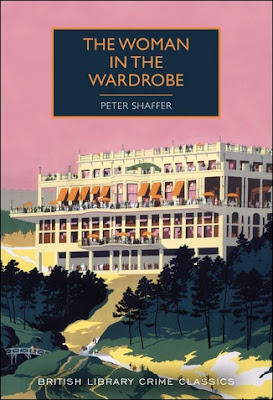 During those seven decades, The Woman in the Wardrobe (1951) and Withered Murder (1955) enchanted mystery readers with their oracular reputation of unheralded, long-lost classics. Regrettably, the Shaffers "resisted numerous offers to republish them" and the hefty, triple-digit price tags (plus shipping) on the limited number of secondhand copies kept them elusive collector's items. And when a copy turns up, it's usually gone within a blink of an eye.

So you can imagine how much locked room readers rejoiced when the British Library announced they were reissuing The Woman in the Wardrobe!

The Woman in the Wardrobe not only lived up to its near-mythical reputation, but is guaranteed to win this year's Reprint of the Year Award. A comedic take on the classic detective story that at first seemed to take the lighthearted, tongue-in-cheek approach of Leo Bruce, R.T. Campbell and Edmund Crispin, but the writing, characterization and even the plotting have a biting, sardonic sense of humor – a tone you would expect from a mean-spirited deconstruction rather than an homage. But it worked! And the ending delivered "a brilliant new solution" to the locked room problem.

Verity is "an immense man" with startling brilliant eyes, a chestnut Van Dyke and a winter cloak who has been "a noted figure in the world of detection" and enjoys the respect of the Yard, but he was "almost as much respected as disliked." He was actually very much disliked, because he was so often right and solved murders, "between tea and supper," with "a mixed display of condescension and incivility" towards the regular police – who were dead and spent with fatigue. A loud, highly opinionated man with questionable ethics (having "more archaeological thefts to his credit than the governing body of any museum in Europe") and prone to giving elaborate lunchtime lectures who annoying made himself indispensable by always being right. And he knows it! Mr. Verity is also abnormally curious and when he sees a man climbing furtively out of a first-floor window, of the Charter Hotel, he decides to ask the manager, Miss Framer, whether it's hotel custom to use windows as an exit. 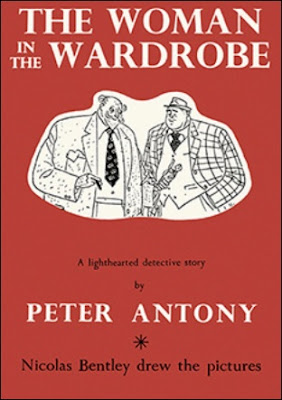 They're interrupted by one of the guests, Mr. Paxton, flying down the stairs screaming blue murder. Paxton found the body of another hotel guest, Mr. Maxwell, but when they go up to investigate, they discover that the door of Maxwell's room was now locked on the inside. And at that same moment, a police constable enters the hotel with yet another guest, Mr. Cunningham, who caught coming out of one of the first-floor windows.

So the door is forced open and discovered a ransacked, blood-soaked room with Maxwell's body laying among the debris on the floor and the hotel waitress, Alice Burton, tied up in the wardrobe. A wonderfully intricate, neatly posed locked room problem that was succinctly summarized as follow:

"A murder is committed in a room. Two men are immediate suspects. Suspect A enters by the window and leaves by the door. Suspect B enters by the door and leaves by the window. Suspect A can lock the window but not the door. Suspect B can lock the door but not the window. Neither can lock both—yet both are locked: and from the inside. And all the while a body, which medical evidence proves could not have done the locking itself before it expired, leaks blood over the carpet of an empty room."

Detective Inspector Rambler enters the fray and perhaps the only man who stands on equal footing with the Great Detective. Only difference between them is that Verity has a temper and a beard, while Rambler is a professional who could afford neither, but Verity "respected the tamed logic in Rambler" and "Rambler the explosive vision in Verity" – together they pour over this pretty puzzle. They review possibility, suggest solutions and pry clues from the various suspects and witnesses, which include the amusing character of Richard Tudor. A pretender to the throne of England who claims to be a direct descendant of King Edward the Sixth, son of King Henry the Eighth, who died unmarried at the age of fifteen.

There's not much else that can be said about the plot, or investigation, because The Woman in the Wardrobe is a very short, tautly written story with the page-count padded out with some nice sketches of the main characters by Nicolas Bentley (son of E.C. Bentley). So it really had no right to be anything more than a comedic curiosity, but the explanation to the locked room, in combination with the identity to the murderer, turned it into an unmitigated classic. A superb and truly original locked room mystery!

The Woman in the Wardrobe is the novel Ulf Durling tried to write with Gammel ost (Hard Cheese, 1971), which could have worked had Durling not occupied himself with gutting the plot of everything that made it a detective story. Shaffer succeeded in both sardonically poking fun at the genre and doing a bit of deconstruction on the side without comprising the essence of a detective story. Chuck in a startling original solution and you have something special and memorable that cemented a top spot on my list of favorite locked room mysteries. Highly recommended!
Geplaatst door TomCat on 9/19/2020