Several years ago, I reviewed Annie Haynes' The Crime at Tattenham Corner (1929) in which a well-known racehorse owner on the eve of the Derby, but the victim owned the odds-on favorite to win the race and the rules are clear on this – an owner's death renders void all his horses' nominations and entries. So the death of the owner took the prospective winner out of the race. 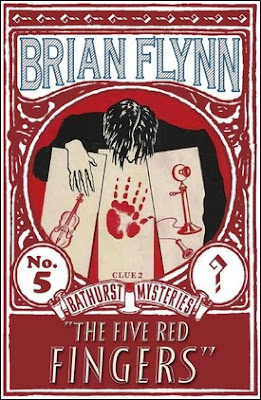 Brian Flynn was a criminally underappreciated mystery writer, as well as a racehorse enthusiast, who used a practically identical premise in one of his earlier detective novels. A novel that was published in the same year as The Crime at Tattenham Corner.

The Five Red Fingers (1929) is the fifth entry in the Anthony Bathurst series, rediscovered by Steve Barge and Dean Street Press, which centers around a South African millionaire, Julius Maitland, who returned to England to indulge in his ruling passion – horse racing. Maitland and his much younger wife, Ida, each own a racehorse, Red Ringan and Princess Alicia, who have the odds in their favor to win the Big One of the racing season. But, even more than that, Maitland dreams of "the classic double" of Derby and Oaks "won by husband and wife."

A good portion of the first half flies through the year leading up to the Derby with hints drops throughout the narrative that something is amiss.

Maitland suffered a severe shock when he spots a stout, overdressed man and a dark-haired woman of "very uncertain years" passing through the corridor of a train, but the person with him could not say whether it was the man or woman who shocked him. Even stranger is that Maitland is unexpectedly called back to South Africa to attend to an extremely urgent and important business matter, which means he has to miss the highly anticipated Derby. And with her husband out of the picture, Ida decides to run her own horse in the race.

Red Ringan and Princess Alicia "pulled up within a few yards of each other past the winning past," respectively coming in first and second, which is a huge victory for Maitland's stable, but as the results were flashed around the world, the police station at a seaside village receives a frantic phone call – a man shouting he's being murdered. What the policeman on the phone hears next is a heavy thud, loud laughter and the strains of a violin before the line goes dead. So they go to the bungalow from which the telephone call came and find the body of Maitland. Shot through the throat! And according to the medical examiner, he had been "dead for a good couple of days."

This has costly, far-reaching consequences because, under Derby rules, his horse had "no right to run in the race" and is retroactively disqualified with Princess Alicia declared the new winner. A change that was either a deadly blow or an unexpected blessing to the people who had either drawn Red Ringan or Princess Alicia in the Calcutta Sweep. 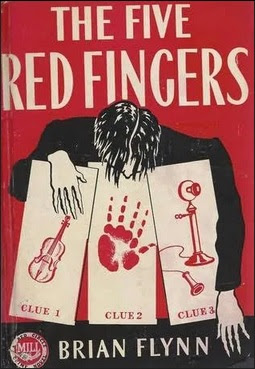 Flynn never explained what, exactly, the idea behind the Calcutta Sweep is, but Steve Barge, our very own Puzzle Doctor, explained it in the introduction as follow: "a high money sweepstake, linked to important races, where, for a significant sum of money, a ticket is bought that is randomly assigned to one of the horses. The money is put into a prize pot, but then the tickets are potentially auctioned off, with that money also going into the pot. The prizes are then apportioned between the owners of the tickets for the first, second and third horses." You only get an idea how high the stakes truly were until Maitland is willing to part with twelve thousand pounds for half a share on a single ticket. If you adjust for inflation, "£12,000 in 1929 is equivalent in purchasing power to about £767,355.07 in 2020."

So with all the bizarre circumstances and high stakes, Sir Austin Kemble, Commissioner of Police, immediately throws up his hands in despair and tells the family that he's prepared to hand over the case to "a brilliant man" who "has helped Scotland Yard more than once when it has confronted very grave difficulties," Anthony Bathurst – a dilettante with no official standing whatsoever. I liked it!

During their investigation, I began to disagree with the general consensus that The Five Red Fingers is not to be counted among Flynn's best detective novels, but that was because I was following a false trail with a familiar scent to it.

I was already gravely suspicious of the gunshot wounds to the throat. You can bet dollars to donuts that every notable deviation from the knife in the back, bullet to the head or twist with the scarf usually turns out to be an important piece of the puzzle. Robin Forsythe made it a specialty of his Anthony Vereker series (e.g. The Ginger Cat Mystery, 1935). So when Bathurst comes across a nest of clues, inside a disused barn, I read them to mean that the plot was a delightful, Golden Age-style elaboration on a very well-known Sherlock Holmes story. Flynn was not only a horse racing enthusiast, but also a massive Conan Doyle mark and his detective novels are littered with references to the Great Detective and Easter eggs.

Well, I missed the mark completely here. The Five Red Fingers does a good job in setting out false trails, real or imagined, with strategically placed red herrings all over the place, but there were so many of them that actual clues became scarce and weakened an already coincidence-laden, sometimes illogical, solution even further – with one of the coincidences bordering on an Act of God. An anti-climatic and deeply unsatisfying solution to a detective story that began with the promise to play a high-stakes game.

So, yes, The Five Red Fingers is not representative of Flynn's work of the period and, if you're new to him, I recommend you begin with either The Mystery of the Peacock's Eye (1928) or Murder en Route (1930). But if you, like me, are waiting for the next ten reprints to be released, The Five Red Fingers will do until then.
Geplaatst door TomCat on 9/30/2020