"The fury of a demon instantly possessed me. I knew myself no longer. My original soul seemed, at once, to take its flight from my body; and a more than fiendish malevolence... thrilled every fiber of my frame."
- Edgar Allan Poe ("The Black Cat," first published The Saturday Evening Post, 1843)

In recent weeks, I've been exploring the works of Robin Forsythe, an ex-convict-turned-writer, who completed his first mystery novel, Missing or Murdered (1929), while serving a term of imprisonment for defrauding the British government. Seven additional novels would follow before he passed away in 1937.

Forsythe was born in 1879 and you can catch an occasional glimpse of the ghosts of the sort of crime-fiction he probably read during his formative years in the waning days of the nineteenth century, but they're compelled to obey the rules and conventions of the Golden Age – as well as sharing that era's deep appreciation for clever and ingenious schemes. The large-scale plots encircling the inexplicable death of Mrs. Mesado in The Pleasure Cruise Mystery (1933) and the extraordinary pair of corpses in The Spirit Murder Mystery (1936) can attest to that claim. 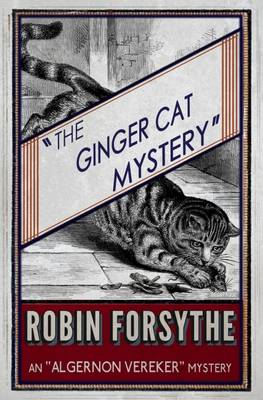 The Ginger Cat Mystery (1935) was the fourth entry in the Anthony "Algernon" Vereker series and published in the United States as Murder at Marston Manor, which turned out to be far more accurate book-title. Granted, the second title is a bit dull and unimaginative, but spot-on as Forsythe strayed down a winding path that lead straight to a manor house mystery in the grand old English tradition.

A small village, Marston-le-Willows, in West Suffolk is the backdrop of The Ginger Cat Mystery and the home-county of Mr. John Cornell, who moved to London as a teenager and accrued a considerable fortune as a merchant, which allowed him to retire at sixty and buy Marston Manor – where he planned to settle for "the remainder of his days" in "peace and seclusion." However, the peace-part is not to be taken as a synonym for a sedentary life.

John Cornell became a widower in the years preceding his retirement and "his frozen sedateness" began to thaw "in the autumn sunshine of his years," which simply translated to having "a high old time." He began to wear brighter clothes, attended opera and theatre performances, frequented nightclubs and acquired a sumptuous houseboat – which he renamed from "Mayfly" to "Mayfly But Can't." Naturally, this rejuvenation cumulated in a marriage with a much, much younger woman.

Josephine Rivron is a friend of Cornell's son, Frank, who, according to local gossip, was "in an unseemly hurry" to get her hands "on the loaded Cornell coffers," because she gave the son a pass and married the old man instead. Regardless, the marriage appeared as a happy one, but tragedy pried them apart: Cornell fell ill and passed away due to pneumonia. There are, however, whispered rumors implying Cornell's unexpected passing was due to poisoning and this lead to an "exhumation by lamplight," but the results were profoundly disenchanting to the village rumor-mill. But then a bone-fide murder occurs!

One early morning, the body of Frank Cornell was found on the half-landing of a staircase leading to the first floor of Marston Manor: he had been shot through the right eye.

This brings Inspector Heather and Anthony "Algernon" Vereker to the scene of the crime, which is where the book begins to differ from the other ones I have read. In the previous books, the dialogue between Vereker and Manuel Ricardo resulted in a flippant and quippish narrative, but the latter is largely absent from the story – giving the overall story a different and more serious dynamic. Vereker spends most of his time interviewing suspects and poking around the crime-scene, which squarely places the book in the "mainly conversation" category and somewhat of a disaster to review. However, my poorly written review should not reflect badly on the book. I very much enjoyed it as a pure, if slowly moving, detective story, but one that's hard to sum-up without giving too much away – which is why this blog-post is horribly overwritten (i.e. padding) without as much as a glance at the plot and characters.

However, I'll say this about The Ginger Cat Mystery: one of the strongest and weakest aspects of the plot is its dedication to fair play, which sounds contradictory, but allow me to explain. Halfway through the story, I had one of those moments that convince me that I'm brilliant armchair detective stuck in the wrong universe. All the pieces of the puzzle fell into place: a supposedly haunted music room, a missing set of duplicate keys, a vest pocket automatic pistol and a conspicuous groove on the bullet. I knew who the murderer was, how the murder was carried out and why, but the problem was that I still had half a book to go through.

I don't know if it was because I had figured everything out by the halfway mark, but I spotted the final twist from a mile away and "the clue of the ginger tabby," in combination with the false explanation, cemented my conviction that I was 100% spot-on with my solution. Well, I was right.

So, all in all, a clever constructed and fairly original detective story that plays scrupulously fair with the reader, but the plot was dressed in a plain and conventional suit, which may be the only serious drawback to a mystery novel that has the name of Robin Forsythe emblazoned on its cover.

Hopefully, I have something substantially better written for my next blog-post. So don't touch that dial!
Geplaatst door TomCat on 1/15/2016