"Impossible is a hell of a strong word, Doctor."
- Elijah Baley (Isaac Asimov's The Caves of Steel, 1954)

John Russell Fearn was an incredible prolific British (pulp) author who dabbled in an array of genres, which encompassed science-fiction, westerns and detective stories, under a multitude of pennames – including "John Slate," "Thornton Ayre" and "Hugo Blayn." A large number of Fearn's work, under as many pseudonyms, were catalogued by Robert Adey in Locked Room Murders and Other Impossible Crimes (1991). So it was only a matter of time before I got around to sampling some of his work.

In the early 1950s, Fearn wrote a brace of science-fiction mysteries, as by "Volsted Gridban," which are both listed as impossible crime novels. The Master Must Die (1953) and The Lonely Astronomer (1954) record the investigations of a scientific detective from the later part of the 22nd century. For some inexplicable reasons, I decided to go with the second and last novel in this short-lived series. 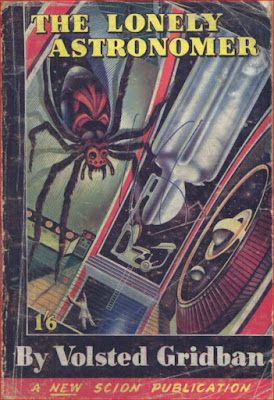 The Lonely Astronomer is set at the Metropolitan Observatory in London, England, which is the pride of British engineers from the year 2190: the site occupied by the observatory "was over five square miles in area" and in the center of the "park-like space" there's a base of a mighty, two-mile high column – "upon the top of which the Observatory was poised." It's a marvel of futuristic design, but the person presiding over this astronomical "crow's nest" is the detestable Dr. Henry Brunner.

Dr. Brunner is as talented as an astronomer as he's at making enemies and supplied everyone around him with ample ammunition to justify their dislike for him.

He "courted" his twenty-five-year old spectrographic assistant, Monica Adley, with all the charm of a medieval robber baron, which did not go over well with her love-interest, David Calhoun, who's an assistant astronomer. There's an actual alien working for the Observatory, Sasmo of Procyon, who arrived on Earth after an "awful voyage across the endless endlessness of space" that lasted twenty-seven generations, but Brunner disrespectfully scoffed at the knowledge and skill being brought to the table by this being from the stars. Finally, there's the janitor and general factotum of the place, simply known as Joe, who owns a peculiar kind of pet: Loony, the Martian gossamer-spider.

The rainbow-hued spiders were created by settler scientists "in a specially cultivated forest environment under colossal pressurized domes" on the Martian surface. They're large, extremely intelligent creatures that are "as frail as a puffball" and "completely non-poisonous," who spend most of their time spinning intricately woven webs that "glitter and flowed like phantasmal rainbows," but Brunner had ordered its destruction – because it roamed around.

So it hardly comes as a shock when Joe finds Brunner inside the Observatory with an ugly gash across his forehead and strangulation marks on his throat.

The police have a special interest in Calhoun and Sasmo as potential suspects, but the problem is that nobody appears to have had an opportunity to commit the murder and "got away without being seen by the janitor." Joe has been ruled out as a suspect "by his age and general feebleness compared to the strength of Brunner."

Enter Adam Quirke: a heavyset, six-feet-nine giant of a man with a round face and a white mane, but this physically overawing man is prone to constant fits of violent and prolonged laughter, which became really annoying after only a short period. Just as annoying as referring to his secretary as "light of my life," which only served to pad out this already very short novel. Quirke is easily one of the most annoying detectives I've ever come across.

Thankfully, those quirks began to subside as soon as Quirke decided to act as a proper detective and the double-pronged solution he proffered to the death of Dr. Brunner was vivid and original – even though it was deeply engrained in the science-fiction genre.

I figured out the direct cause of the injuries, but the indirect cause was something different altogether. It's what made me close the book without the feeling of having wasted my time, which is a fear I had several times while reading the book, because The Lonely Astronomer has its fair share of flaws: one aspect of the solution, concerning the victim, was not properly hinted at, spiders are referred to as insects and than there is Quirke's annoying mannerisms.

It's interesting to note that our time is more advanced in some aspects than Fearn's imagination of the far-flung future of 2191: they have colonized Mars and dabbled in genetic manipulation, but the only information that can be drawn from blood is to which group it belongs and a device similar to our CAT-scan has only recently been invented – which is called (no joke) "The Penetrator." Somehow, that did not throw Quirke in a fit of laughter.

So, The Lonely Astronomer is not a classic of its kind, but it’s an interesting specimen and another example showing The Caves of Steel (1954) by Isaac Asimov was not the first of its kind. Something I discovered when I read Manly Wade Wellman's Devil's Planet (1942). By the way, I was inspired to bump this up my to-be-read list by a review of The Naked Sun (1957) on Ho-Ling's blog. You might find it a reason to read it, if you haven't done so already.

Finally, allow me to draw your attention to my review of Robin Forsythe's The Pleasure Cruise Mystery (1933), which I posted yesterday. I might return to Forsythe for my next review, because I really enjoyed my introduction to his work. So, once again, stay glued to that screen!
Geplaatst door TomCat on 1/08/2016