"...an engineered death is merely a polite euphemism for murder!"
- Jeffery Blackburn (Max Afford's "Poison Can Be Puzzling," collected in Two Locked Room Mysteries and a Ripping Yarn, 2008)

Max Afford was an Australian playwright and novelist who was previously discussed on this blog when I reviewed a slender volume of short fiction, Two Locked Room Mysteries and a Ripping Yarn (2008), which included a pair of stories featuring his series characters – a genius amateur, named Jeffery Blackburn, and the laconic Inspector Read.

Blackburn and Read appeared in roughly half a dozen full-length novels and four of them were catalogued by Robert Adey in Locked Room Murders and Other Impossible Crimes (1991). You'd assume that would make Afford's work of special interest to devotees of impossible crime fiction, but even now that they're readily available again, they continue to be fairly obscure and overlooked by locked room enthusiasts. So let's change that and take one of them for a test-ride. 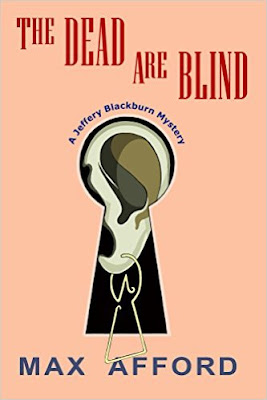 The Dead Are Blind (1937) is the third entry in the Blackburn series and Afford drew on his own experience as a producer and writer of radio-plays, which furnished the plot of the story with an interesting backdrop. The story begins with Jeffery Blackburn reflecting how the evenings have become rather dull, because "all the super-criminals appear to have turned their nefarious attentions to dinner-hour radio thrillers." Luckily, Read was supplied with invitations for the opening of a new subsidiary studio of BBC.

A radio-play will be performed during opening night, entitled Darkness is Danger, which is produced by a former talkie-director, Carl von Bethke, who brought an innovative perspective from the big screen to the radio studio – innovations that nearly provided a cover for an almost perfect crime. Near perfect is a key phrase that perfectly sums up the events preceding the opening of the studio: a technical break-down occurs between the special effects room in the basement and the dramatic studio, which means that the effect will have to be done in the same studio as the artists. Just as it was "in the early days of broadcasting."

However, one of the stars of the show, Olga Lusinska, raises proper Hell over these improvisations and refuses to "act among brooms and buckets and mops," but these are minor snags compared to what happened during the live broadcast.

There's a scene in the radio-play in which the characters are "plunged in darkness" and in order to strengthen the effect the lights are dimmed in the studio, but when they come back on there’s somewhat of a problem: the twisted body of one of the actresses, Mary Marlowe, lay on the floor of the studio. The key to the door of the dramatic studio is firmly clasped in one of her cold, stiffened hands, which prevented anyone from entering or leaving the room.

A doctor pronounces the death of Mary Marlowe to be "one of the best authenticated cases of heart failure" he had "ever seen," but there are several dissenting voices who suggest they might be looking at the end results of an audacious crime – which include Blackburn and a close-friend of the victim. Initially, Blackburn suspects the cause of death might be one of those forbidden and untraceable poisons, but a long and intensive post-mortem examinations yields surprising results.

Slowly, but surely, the layers covering up the method are peeled away and the plot begins to resemble a proper, classically structured locked room mystery. Showing how the murder was a locked room killing actually answered the question of how it was carried out, which is an unusual, but clever and original, approach to the locked room problem. Never seen that route taken before that I can remember. The idea behind the explanation anticipates one of John Dickson Carr's locked room novels and is tangibly related to a non-impossible crime mystery I reviewed very recently on here, which was helpful in gauging the nature of the method.

The set-up of this well disguised locked room murder, subsequent investigations and eventual explanation covers the first six and best chapters of the book.

What follows is digging around in the past of the victim, which involved a fatal fire, dope smuggling, coded messages and two more murders that reeked of offal to pad-out the story, but Afford redeemed himself in the end – since they stuck to the main plot better than I expected from their presentation.

The method for the second murder could've easily been presented as a quasi-impossible crime, if done in a public place with lots of eyewitnesses, and was foreshadowed in the early chapters of the book. And the third body is a classic one that threw me off the scent of the murderer for a brief moment. So they hardly qualify as padding and that was pleasantly surprising. I was not as thrilled by the spot of danger Blackburn found himself in, which had the murderer cartoonishly confessing to everything and promising that "if it is the last thing" this person does "upon this Earth," but Blackburn was going to end up somewhere were he'll not be able to do any of his "damned investigating."

So, all in all, The Dead Are Blind has an original structured locked room plot insulated by a fairly decent, if not always perfect, detective story, but as a whole it's well worth a read.
Geplaatst door TomCat on 1/21/2016