"Geez awfully quiet, dang, I wonder if there anymore hunters out here this mornin'"
- Elmer Fudd

In the final days of 2014, I wrote a blog-post, "The Renaissance Era of Detective Fiction," proclaiming that the dawn of a new era peeked over the horizon and the subsequent twelve months has shown an invigorated interest for the Golden Age detective novel – an interest shared by both readers and publishers.

A whole slew of obscure and long-forgotten mystery writers were unearthed in 2015: John Bude, J. Jefferson Farjeon, Annie Haynes, Ianthe Jerrold, Lenore Glen Offord, E.R. Punshon, Harriet Rutland and HarperCollins' re-launch of The Detective Club. One of the lesser-known, unfairly forgotten names in this deluge was that of an Australian mystery writer, named June Wright, who finally had one of "lost" novels published last year: Duck Season Death (c. 1955). 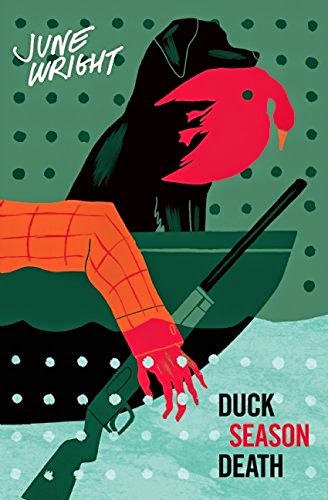 June Wright was a mother of six children and combined a career as a spouse with that of a mystery novelist, which is an occupation she crammed in the two or three hours that were left to her in the evening. The results were six books, published during the tail-end of the Golden Age, which began with Murder in the Telephone Exchange (1948) and ended with Make-Up to Murder (1966). But there were two more mystery novels that were never published in Wright's lifetime: Duck Season Death and The Law Courts Mystery.


Unfortunately, The Law Courts Mystery was never published and the manuscript is now considered to be the lost, but Duck Season Death was saved from a similar fate and appeared in print for the first time 2015 – courtesy of Verse Chorus Press.

Duck Season Death, alternatively titled The Textbook Detective Story, was rejected on the basis over several critical reports from so-called test readers, who labeled a purposely classically-styled, somewhat tongue-in-cheek detective story as a "stock-box novel of the whodunit house party variety" with "mechanics" that "follow the old lines of the country house murder." Well, it's this kind of utter nonsense that led to irrevocable lost of a number of unpublished manuscripts by the likes of Joseph Commings, Glyn Carr, C. Daly King and Hake Talbot, which can not be tolerated in this new Golden Era. I suggest we find these court jesters, whether they are dead or alive now, coat them with tar and toss them into a gibbet cage. Anyhow, on to the story at hand!

The tragic hero of Duck Season Death is Charles Carmichael, the crime-fiction reviewer for Culture and Critic, which is a small, but influential, literary quarterly owned by his uncle – the detestable and hateful Athol Sefton. Lamentably, Carmichael finds himself shackled to his uncle's company for a spot of duck shooting at the Duck and Dog Inn, but Sefton has made himself a target of the scorn of every guest at the hotel. As the readers knows from the introductory chapters, some of them had a motive to take a shot at him before they bumped into him at the place.

So is at any surprise when a stray bullet puts an end to Sefton? Carmichael is convinced that his uncle was "deliberately and cleverly murdered," but here is where the plot begins to diverge from your dime-a-dozen country house murder mysteries with a closed-circle of suspects: nobody believes Carmichael. The authorities and locals assume Sefton came to his end as a result of a shooting accident, because "every season there is some fatality or other like this" and is often reprimanded for insisting a murder has taken place – even publicly by the corner during the inquest.

Well, as you can see, I enjoyed reading Duck Season Death, but I have to fulfill my duties as a dreary, disgusting armchair critic by pointing out that the fair play factor is a bit dodgy. The motive is foreshadowed, but not revealed until the final part of the story and this makes it very difficult to settle on a murderer. However, when it's revealed and you keep some of the clues in mind, you should be able to foresee the final twist. So technically it's a completely fair play mystery, but it took some time in getting there.

Stylistically, I also have to note that the book differed in one aspect from other Australian mystery writers I've read, namely Arthur W. Upfield and S.H. Courtier, which strongly evoked the backcloth of their stories and made you believe the sort of crimes they wrote about were indigenes to Australia – and could have only taken place down under. I did not have that feeling with Duck Season Death, which could have just easily been set in England or America, but that's a minor and personal quibble.

Finally, in spite of having reissued this forgotten, nearly lost detective novel, I have to castigate Verse Chorus Press for not re-titling the book as A Rejection of Murder, because it would've perfectly fitted both the back story of the book's publication and the plot.
However, you should not allow the probing and nitpicking from dismal critics, from past or present, to spoil the fun of this book, because I'm sure seasoned mystery readers will enjoy this unusual ripple in the traditional closed-circle of suspects story. But judge for yourself. I'll certainly be returning to Wright's work in the near future to see what she was capable off in her debut novel.
Geplaatst door TomCat on 1/12/2016