A Riddle in Verse

"For murder, though it has no tongue, will speak
With most miraculous organ."
- William Shakespeare (Hamlet, 1600-02)

During the first couple of years on this blog, I read a whole slew of historical mystery novels from a very prolific scribbler, Paul Doherty, but the flood was stemmed to a trickle by the rapidly expanding gamut of procurable Golden Age and neo-classical mysteries.

I've read only two of Doherty's historical fancies in just as many years: The Nightingale Gallery (1991) and Song of a Dark Angel (1994). So I thought a return to his work was in order and picked the inaugural novel in what seems like a very promising series. A series that'll see me back before 2017 rolls around!

The White Rose Murders (1991) was the first in a series of six, originally published under the nom-de-plume of "Michael Clynes," which all have the long and descriptive subtitle of "Journal of Sir Roger Shallot" that concerns "certain wicked conspiracies and horrible murders perpetrated in the reign of King Henry VIII" – a premise pregnant with promise and vast possibilities. 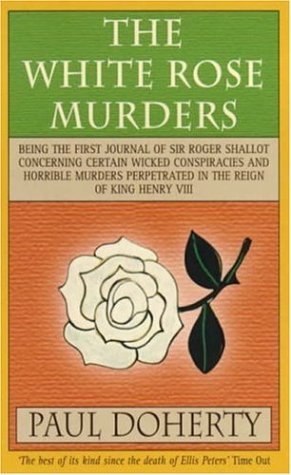 Sir Roger Shallot was "born with the quickest wits" and "fastest legs in Christendom," who has probably bedded as many women as a certain Mongolian warlord, but has a profound lack of courage and often took what he could carry. Usually valuables that did not belong to him. Shallot has not led an altogether honorable life, but one that brought him to his ninetieth summer and not everyone was able to reach that pinnacle in the 16th century.

However, in his old days, Shallot has become a haunted man as the "clip-clop of spectral hooves on the peddle-strewn path in front of the manor" herald the ghosts of his pasts as they form an "army of silent witnesses" around his bed – taunting him with jeering cries of being a liar, thief and a coward. Shallot tells the story behind these ghostly faces as he dictates his memoirs to a chaplain in the center of a maze, which protects him from "the importunate pleadings" of his "brood of children" and the "soft footfall of the assassin" from one of the many secret societies who'd like to see him depart from the world. You'll understand why once you learn his story. Shallot has a penchant for landing in trouble and making the occasional enemy on the side.

First of all, The White Rose Murders is an original story that tells of Sir Roger Shallot's humble beginnings: a child born during a time of terror "when the great Sweating Sickness swept into London" and Henry VII reigned over the country, but a life of mischief in bad company nearly condemned him to death by hanging and was saved by an offer to enlist in the King's Army to march against the Scots – where he "hid beneath a wagon until the slaughter had finished" and "came out with the rest of the English Army to claim a great victory." Well, being a "war hero" did not prevent Shallot from a second meeting with the hangman, but this time he was spared by interference of an old and influential school friend, Benjamin Daunbey.

Daunbey is the favorite nephew of Cardinal Wolsey, the ruling scepter in the hand of King Henry VIII, who took Shallot as his manservant and through this connection they become encumbered in a Royal assignment.

A potential deadly chore that began when James IV of Scotland is killed on the battlefield of Flodden and his widow, Queen Margaret, fled to England and had to leave her infant son behind under a Council of Regency. Queen Margaret is the sister of Henry VIII and seeing her restored to the Scottish throne is in the best interest of England, which brings Shallot and Daunbey in the picture: Cardinal Wolsey has imprisoned Alexander Selkirk, "formerly physician to the late King James," to draw information from him that could assist Queen Margaret's return to Scotland and he's suspected of being a member of Les Blancs Sangiers – a secret coven of Yorkist conspirators that plots the overthrow of the Tudor Monarchy. The only obstacle to obtaining this information is the fact that Selkirk's mind has wandered away from him and spends his time writing "doggerel poetry" and staring "blankly at the walls of his cell," which is not very helpful. But he was still considered a danger by some. 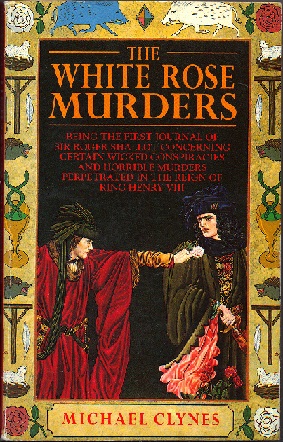 One morning, Selkirk's is discovered dead in his prison cell, "brutally murdered by poison," but the question is how the murderer managed to administrate the deadly potion: the door of the chamber was locked and bolted. There were two guards at the foot of the steps and two who stood outside the prisoner's chamber. Guards who tasted every scrap of food and sipped every drop of claret that entered the room without showing any signs of the ill effects of poisoning. The murder room had high-up, arrow-slit windows inside a sheer wall of thirty feet, but these proved minor obstacles to an apparently ghost-like killer who also left white rose on the victim's desk – The White Rose of York and the mark of Les Blancs Sangliers!

Shallot and Daubney find themselves confronted with an entire string of murders, containing a second impossible poisoning in a sealed chamber, which they suspect sprang from the inner-circle of Queen Margaret's household. A suspicion that's confirmed when they join the Queen’s retinue to meet a Scottish envoy to negotiate her return to Scotland, but murder is dogging their every step: from a lush priory and the vile back alleys of London to the City of Paris, which "seethes like a hissing snake" and "full of intrigue, subtle plots and traders who could cheat a beggar out of his skin" – which makes you wonder how Shallot managed to life for nearly a full century.

Doherty handles all of these plot-threads with remarkable skill and strewn about ample clues to many of the proposed mysteries, which were hidden in a scrap of poetry, a cat who refused to die and the embalmed corpse of King James. The locked rooms were handled equally well and the explanations for them were quite acceptable and reasonable. Not the best examples the genre has to offer, but they were still pretty good and poisonings in locked rooms are difficult to pull off convincingly.

I guess the only point I could bring against the plot is that the murderer had nearly dissipated the small pool of suspects by the end of the book, which made this person stand out, but even that compensated by the fact that Daubney suspected the wrong person. You should discover for yourself why that point is important.

However, the most attractive feature of The White Rose Murders is Shallot's delightful narrative, which is often interrupted to rebuke the chaplain for sneering at his cowardice or calling him a hypocrite for condemning his loose morals. Shallot's narrative is also interspersed with such prosperous claims as having met one of the Princes in the Tower (who was supposed to be dead) and having been friends with William Shakespeare!

In summation: The White Rose Murders has a soundly constructed, reasonable clued plot that's wrapped in a grand and amusing narrative, which is told by what's arguably the best character Doherty has created. It's a pity he was abandoned after only six novels, but I still have six of them to go and I'll be eliminating some of them from my TBR-list before the year draws to an end.

The Journals of Sir Roger Shallot: