"It's a dangerous piece of knowledge to possess, and it's well known that one murder leads to another."
- Mr. Winkley (Harriet Rutland's Bleeding Hooks, 1940)

Morna Doris MacTaggert was the birth-name of "Elizabeth Ferrars," or "E.X. Ferrars," whose career as a mystery novelist spanned five decades, from 1940 to the mid-1990s, during which she wrote over seventy crime novels and numerous short stories – some of them were posthumously collected (e.g. The Casebook of Jonas P. Jonas and Other Mysteries, 2012).

Ferrars has been called the closet of all mystery novelists to Agatha Christie in "style, plotting and general milieu," but I suspect this to be an arbitrary, superficial comparison similar to how the late P.D. James was once heralded as her "Crown Princess." They were female mystery writers who were, at one point in time, contemporaries of one another, which is where the similarities come to a halt. I've read only two of Ferrars' detective stories, but I think the subject of this blog-post showed a writer who fundamentally differed from Christie. As well as poking the popular notion that detective stories from the Golden Era only dwelled in the stuffy, hearth-warmed drawing rooms of ancestral mansions in the eye. 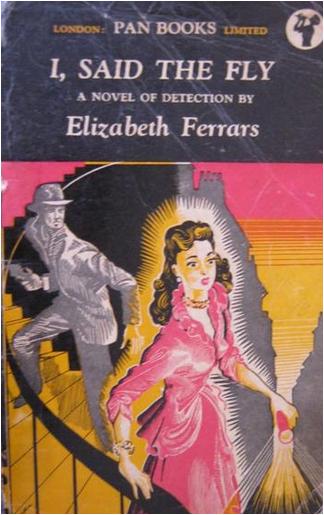 I, Said the Fly (1945) was published in the final year of World War II, but opens in 1941 in a bombed-out street in London and proceeds to tell the story of what happened there in the year preceding the war.

Before the bombs, Little Carberry Street had already lost a lot of its eighteenth century respectability and became dominated by the squalor of the poor. The windows were hung with "curtains of soiled yellow lace," bug-infested rooms and the street "filled by the shrill voices of swarms of illdressed, underfed children" and the disturbing "singing of homegoing drunks" – interspersed with "screams and shouts" and "fighting in the street." Kay Bryant found herself occupying a cheap bed-sitting-room on the top floor of No. 10 Little Carberry Street after she drifted away from her husband and had an "extreme shortage of money."

She returned to the place "to see what the blitz had done to it" and began to remember the grim, horrifying events that took place there. It began when Kay's neighbor, Pamela Fuller, convinced their landlady, Miss Lingard, to install a gas-fire in her room, but the gas-fitters found something beneath the floorboards that delayed the job: a revolver swaddled in a dust cloth!

The firearm is linked by the police to a murder that occurred a fortnight before the floorboards were lifted: a naked, mutilated body of a woman, shot through the heart, was discovered on Hampstead Heath and the victim is identified as a former tenant – which makes it very likely that the murderer is an occupant of No. 10. There are more than enough potential suspects for Inspector Corey to review.

Tovey is the caretaker of the place who shuffles around the place to make "symbolic gestures of cleaning" and can usually be "found outside a door or round a bend in the staircase," which does not make him a very popular figure. He often verbally abuses Miss Lingard, but excuses him as being "quite a character" and "had trouble with his poor old head" after being wounded in World War I. Ted Hay and Melissa Ivory share a room and live a "dark life of sin." Hay makes his loving "in a hand-to-mouth fashion on the edge of the world of journalism" and "knew who was going to marry whose wife" or "who was homosexual." Ivory was simply "a very odd person" and attempting to figure her out got nobody anywhere. Charlie Boyce is a tenant on the first-floor and loves to wake everyone up whenever he has forgotten his latch-key and Kay would not be surprised that his whole existence was made up of "one unmentionable crime after another." Mrs. Flower lives on the ground floor and "loans her front room to a lot of her girlfriends and their gentlemen acquaintances," which presumably comes with "a commission on the transaction" that helps her pay the rent.

Well, I said Ferrars did not struck me as an Agatha Christie-type mystery writer and the backdrop, characters and even the plot of I, Said the Fly can testify to that. However, Ferrars was still a product of the Golden Age and that becomes very evident towards the end of the book when some of the characters begin to draw-up dummy cases against each other, which was (plot-wise) my favorite part of the book – because I liked them better than the eventual explanation. Not that the solution was thoroughly bad, or anything, but I simply enjoyed how the characters were airing their suspicions and attempted to make the evidence fit their pet-theories. I was pleasantly reminded of Anthony Berkeley! But it also made the real explanation somewhat underwhelming.

So don't expect an Agatha Christie-tier rug puller that'll leave you dumbstruck with surprise, but I would still warmly recommend the book to the loyal readers of the Crime Queens who have nearly depleted their pile of Christie, Dorothy L. Sayers, Ngiao Marsh, Christianna Brand, Margery Allingham, Gladys Mitchell and the others. I'd wager the backdrop op the story will be interesting to genre historians and scholars of popular culture, because it goes contrary to the image a lot of people have of a British whodunit from the 1940s.