The Golden Age of Detection Wiki has a summery biography for Morna Doris MacTaggart, whose penname, “Elizabeth X. Ferrars,” was plastered on the covers of more than sixty mystery novels – appearing for the first time in print at the dawn of WWII and the last one rolled off the presses in 1997! 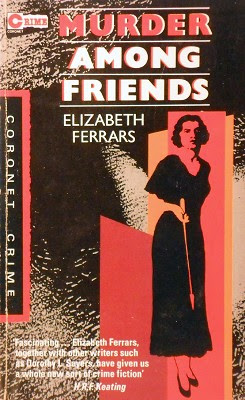 That's a prolific writing career covering a significant chunk of the previous century, during which she garnered praise for her novels and was compared with Agatha Christie and Dorothy L. Sayers, but the absence of a solid lead character in her detective stories may have contributed to her descend into literary obscurity. I know she had two, albeit minor, series characters in Toby Dyke and Jonas P. Jonas, but from what I gathered, the majority of her work consists of stand-alone novels and the rule of thumb with Golden Age mysteries is that the lack of an iconic detective figure rarely bodes well for a writers longevity. Who remembers now Pat McGerr, a true post-WWII era innovator, or the man who penned the delightful The Neat Little Corpse (1951), Max Murray, but a handful of fervent "Connoisseurs in Murder."

Murder Among Friends (1946) is one of those stand-alone mysteries that was selected by the late H.R.F. Keating as one of his "one hundred best crime and mystery books" and Ferrar's regular publisher apparently rejected the manuscript, because the content was too steamy for a proper detective story, however, you shouldn't rush off to order a copy on account of its explicit content – which is adorably tame by today's standard that probably would even consider P.D. James as one of the "cozies."

Ferrar's coated the plot of Murder Among Friends in the style of the classic, British drawing room mysteries, in which the roar of the war is reduced to a murmur from the outside world penetrating the blacked out windows of the home of Cecily Lightfood – who's throwing a party for a closed circle of artistic friends. The main objective of the party is to lift the spirit of a lauded playwright, Aubrey Ritter, after his wife, Rosamund, killed herself the month before. However, the guest of honor no-shows, and before long, they find out why: someone busted open his head in his upstairs apartment with a fire iron. The American soldier who discovered the dying Ritter heard him mutter the name Janet. One of the titular friends is a Janet Markland, who even makes an admission, which is immediately detracted, but the damage has been done and she's convicted for the murder of Aubrey Ritter – and sentenced to be hanged by the neck.

Everyone seems to accept the official reading of the murder and the sentencing, except for Alice Church, who feels not so sure if the evidence is complete or even if they're aware of the full truth. Alice begins to talk with the people who knew Janet personally and creates a picture of a woman of whom she's convinced could not have committed the murder. These four conversations and combined with the fact everyone accepts the murder as a closed and shut case, gives the plot a murder-in-retrospect structure and may have been influenced by Agatha Christie's Five Little Pigs (1943) and (maybe) Sparkling Cyanide (1945). The downside is that story has the pace and urgency of a dying mountain stream. The ending is mixed bag of treats and there were some clever edges to the solution, but found the explanation for fingerprints on the murder weapon to be very convenient for the purpose of the plot.

In summation: Murder Among Friends is a very chatty, British-styled drawing room mystery that openly flirts with certain elements of the psychological crime novel and still has some clever, sharp edges that mystery fans can enjoy. Not great, but not all that shabby either.