A Stuffed Bag of Tricks

"There was a bang, a plock, and a hiss, then a smell of beer incongruously spreading into the air."
- Nicholas Blake (There's Trouble Brewing, 1937)

The Plague of Thieves Affair (2016) is the fourth in a series of historical mystery novels by Bill Pronzini and Marcia Muller, which began with The Bughouse Affair (2013), but originated in a Western-style novel, Quincannon (1985), that spawned a long-running series of short detective stories – some of which were collected in Carpenter and Quincannon: Professional Detective Services (1998).

John Quincannon and Sabina Carpenter solved a preponderance of their cases in magazine stories and the basic structure of the plot of The Plague of Thieves Affair seems to hark back to the short story form. There are a number of cases in the book that solved without wasting any time and could easily stand by their own as short stories. 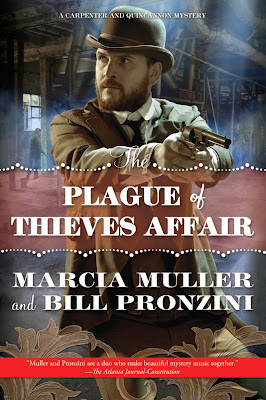 The Plague of Thieves Affair embarks with Quincannon nearing the final stages of an investigation at Golden State Steam Beer. Owner of the brewery, John Willard, engaged the services of Quincannon to probe the bizarre death of the head brew-master, Otto Ackermann, who had been stunned with a blow to the head and pitched into a "vat of fermenting beer to drown" – which differs from the scenario of a freak-accident that the "incompetent minions of the law" had pieced together "after a cursory investigation." Obviously, the motive was the appropriation of the brew-master's secret recipe and implicated a rival brewery lead by "a morally bankrupt businessman."

Meanwhile, Sabina Carpenter has a meeting with several clients: Marcel Carreaux and Andrew Rayburn are the first arrivals. Carreaux is the assistant curator of the Louvre Museum in Paris and Rayburn is the owner of the "well-regarded Rayburn Art Gallery on Post Street," who were brought together by an exhibition of "rare and valuable antique ladies' handbags" – dubbed "Reticules Through the Ages." One of the items on display is the Marie Antoinette chatelaine bag, valued at several thousand dollars, which requires special protection because "thieves abound in the Barbary Coast." It's the reason why they approached Carpenter and Quincannon.

A dandy, "gay blade," by the name of Roland W. Fairchild, is the second client of the day and he wants to hire the agency to find his missing cousin, Charles P. Fairchild III, who became the sole inheritor of a multi-million dollar estate and Carpenter is "uniquely qualified to locate him" – since the patrician-sounding cousin is none other than the scattered-brain, bughouse Holmes who made his first appearance in The Bughouse Affair. A growing case-load, but manageable as long as complications are kept at bay, which is not going to be case.

Quincannon practically has the murderer by the scruff of the neck, but the person has cornered himself inside a building that houses the utility-and storage rooms. There are two solid oak doors, "installed as a deterrent to both rodents and human pilferage," separating Quincannon from his quarry. However, the report of a gunshot is heard inside and when the doors are finally opened they find the body of the suspect sprawled on the ground: a gunshot wound in the chest and a revolver near at hand. Quincannon privately scoffs at the idea of suicide, but murder requires a gunman and nobody was found hiding in the storage room. It was Quincannon who stood guard at the only door giving access to the rooms and heard the gunshot. But nobody entered or left the room while he was standing there!

It's a classic locked room murder, but not a particular difficult one to explain and this plot-thread soon becomes part of a chase-type of story, in which Quincannon pursues a second, slippery customer with bloody hands and attempts to locate the stolen recipe – which brings him to several interesting locations and comes across some colorful folks.

However, Sabina is faced with a number of complications as well as a seemingly impossible problem. During the exhibit of the antique handbags, the lights are extinguished for "a period of no more than two minutes" and when they came on again the Marie Antoinette bag was gone! All of the exits were guarded, but a thorough search of the premises failed to retrieve the stolen handbag. Luckily, the crackbrain Sherlock turned up again to help Sabina wrap up the case in record-time.

Sabina was also hired to find the self-proclaimed Holmes by supposed relatives of him, but that soon developed in a case of murder with the bughouse Holmes as the chief-suspect, which they also solved within the length of a short story – and could have easily been called, "as the good Doctor Watson might have" titled it, "The Adventure of the Wrong Detective."

It's these short story-like plot-threads, in combination with the compartmentalized nature of Quincannon's investigation, that gives the impression of reading a collection of short stories converted into a novel with bridging material. Pronzini has done that previously with Scattershot (1982), but I'm not sure if a similar route was taken with The Plague of Thieves Affair.

However, the rather unfortunate result is that The Plague of Thieves Affair comes across as a relatively minor series-entry, which mainly contributed character-development to ongoing story lines – such as the back-story of the bughouse Holmes and the relationship between the series protagonists.

As a fan of the series, I very much enjoyed reading The Plague of Thieves Affair, but, judged purely as a mystery novel, it's a notch below the previous books in the series.