Writing as "John Bude," an English theatrical producer and director by the name of Ernest C. Elmore penned and published thirty detective novels over the span of nearly twenty-five years – all of which are reputedly to be very rare and highly collectible.

Fortunately, the British Library has reissued a handful of books from Bude's impressive body of work: The Cornish Coast Murder (1935), The Lake District Murder (1935) and The Sussex Down Murder (1936). Death on the Riviera (1952) is scheduled for release in March of this year. 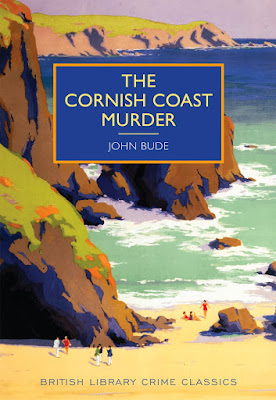 These brand new editions are introduced by Martin Edwards, an accomplished crime writer and genre historian, who observes that Bude's debut novel contains several clues that help to explain his growing popularity more than half a century after his death – which has partially to do with a "writing style" that is "relaxed and rather more polished than one would expect from a first-time novelist." I also believe Bude's poorly masked love for the detective story played a part in being embraced by a contemporary and appreciative reading audience, which is especially noticeable in the opening chapter of The Cornish Coast Murder.

Reverend Dodd, Vicar of St. Michael's-on-the-Cliff, Boscawen, has a tradition Monday evening ceremony with Doctor Pendrill. They smoke and have metaphysical arguments, but the true purpose of their weekly tradition is to indulge in their vicarious, but perfectly commonly, "lust for crime stories." Every week, they borrow and share pieces of crime fiction from the local library and Reverend Dodd compiled an interesting selection for their latest meeting: Edgar Wallace, "the new J.S. Fletcher," J.J. Farjeon, Dorothy L. Sayers and Freeman Wills Crofts – some of them I have yet to read myself. I guess that's why I've never been able to shake off the feeling that I have only scratched the surface of the genre.

Anyway, Reverend Dodd and Dr. Pendrill are provided with an opportunity to put all that accumulated knowledge from fiction into practice when a phone-call comes in for the doctor.

The local squire of the small, isolated village of some four-hundred souls, Julius Tregarthan, was found dead in his study: someone had fired several shots under the cover of a raging thunderstorm and one of the bullets "went clean through the brain." It's a strain on the brain of the local police force, Constable Grouch and Inspector Bigswell, because viable suspects, motives and evidence are thinly spread around.

Firstly, there's a niece, Ruth, who was nurturing an intimate friendship with a local writer and World War I veteran, Ronald Hardy, but her uncle disapproved of the friendship. An admittedly weak motive, but one that has to be taken seriously by the police after both Hardy and his service revolver disappeared – coupled with the obvious prevaricate behavior of Ruth. Secondly, a local black sheep and village bad man, Ned Salter, who had been imprisoned by Tregarthan and evicted from his cottage was seen arguing with the victim on the day of the shooting and there's gambling servant who had a monetary motive.

However, it's the Reverend Dodd who figured out answers to several of the most nagging questions blocking the path to the entire solution, which include the "strange lack of footprints on the cliff-path" and a logical explanation for "the widely scattered shots" that "starred the glass" of the study-windows.

I can only praise this part of the story for being both original and logical, but the overall quality of the story was marred by a combination of two flaws: the murderer is a minor character that hovered in the background and the motivation of this person was never properly hinted at. That left me with very mixed feelings. On the one hand, I enjoyed the smooth writing, the characters and some of the ideas, which was somewhat reminiscent of E.R. Punshon, but the ending felt like an absolute cheat. I wish I could end this review on a far more positive note than this, but the ending was what it was.

So if you, like me, attach some importance to the Golden Age rules of fair play, you'll probably end up a little bit disappointed that The Cornish Coast Murder did not sustain itself as a proper, fair play Golden Age mystery right up till the ending. However, I agree with Edwards that, as a debut novel, it's an extremely well written and characterized novel. There have been A-list contemporaries of Bude who fared far worst in their first outing. So I'm still tempted to explore his later work as well.

Well, that's the first review for 2016 and I'll be dipping in some impossible crime material for the second one, which should come as a complete and utter surprise to you. Anyhow, I wish each and every one of you all the best for this year!
Geplaatst door TomCat on 1/01/2016