"There's the danger of making theory fact. And the full story wasn't told. When is it ever? Well, whatever the truth of that business, old man, from now on the open mind is going to be no mere figure of speech for you and me."
- Chief Inspector Dan Pardoe (Dorothy Bowers' Shadows Before, 1939)

Last year, I reviewed Annie Haynes' final and posthumously published mystery novel, The Crystal Beads Murder (1930), which was completed upon her untimely passing by an uncredited colleague and currently the assumption is that the finishing touch was done by "Anthony Gilbert" – who would became an accomplished mystery novelist herself in the succeeding decades. Shamefully, I began to neglect Haynes as soon as I discovered her and several months had to pass before I returned to her detective fiction. 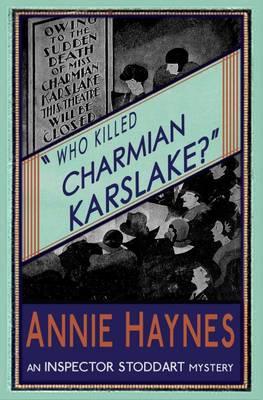 Which brings me to the subject of this blog-post: Who Killed Charmian Karslake? (1929). The book was another posthumously published novel, but one Haynes was able to finish before passing away. I picked this particular book on the assumption that it was a detective story with a theatrical background, but it turned out to be an old-fashioned, village-type of mystery such as the one I previously reviewed.

Scenery of Who Killed Charmian Karslake? is a "quaint old spot," a tiny and quiet village named Hepton, where the Penn-Moreton family is perked on the top rung of the social ladder as "the little tin gods of the town."

Hepton Abbey is the ancestral seat of the Penn-Moreton’s and was bestowed by King Henry VIII "upon his reigning favorite," during a period known as the Dissolution of the Monasteries, which was turned in "something of a showplace" without too many sacrifices to its original ambience – high-up, diamond-paned windows, thick walls that are "un-desecrated by modern prints" and rooms that had once served as monks' cells. It's a place that lends itself perfectly to guided tours whenever guests are being entertained, but the showpiece of the latest house party at Hepton Abbey is one of the visitors.

The great American actress, Charmian Karslake, who had taken London by storm had surprisingly accepted an invitation from Lady Moreton to attend the party. She had "refused all others since coming to England," but apparently accepted this one on account of her enormous interest in "antiquities of all kinds" and the "Abbey is distinctly unique." After all, Karslake wears an old and valuable necklace, often spoken of as her "sapphire mascot," which was once in the possession of the "ill-fated Paul of Russia" and "the murdered Queen Draga of Serbia." Karslake had been warned that misfortune stalked the owners of the sapphire ball and could potentially attract the "cupidity of some of the criminal classes," but she laughed at the very notion of her mascot bringing her bad luck – which is exactly what it seems to have to done.

Charmian Karslake fails to make an appearance at the breakfast table the following morning and the door to her bedroom has to be broken down, which reveals a room in confusion and the body of the famous actress laying on the bed. She had been shot while struggling for her life. The local police appealed to Scotland Yard and they dispatched one of their best minds, Inspector Stoddart, to the scene of the crime.

Inspector Stoddart is confronted with a very respectable cast of potential murderers: Sir Arthur Penn-Moreton and Lady Moreton. The younger brother of the Lord of the Manor: Richard "Dicky" Penn-Moreton and his wife Sadie, daughter of Silas P. Jugg, the "canned soup magnate" from America who observes that "British sleuths seem to be a bit backward" and cabled one of the "sharpest sleuths in the States" to make the crossing, but J.B. Harker sadly never makes an appearance. I would've loved a race to the solution between two detectives. Anyhow, a friend and barrister of the family, John Larpent, his fiancée, Paula Galbraith, and Karslake’s French maid, Celeste, further round out the cast of suspects.

However, Stoddart realizes that, in order to answer the titular question, he has to discover who Charmian Karslake was in a prior life, because she seemed to very familiar with the village for a stranger. She also spoke with a man during the party whom she called Peter Hailsham, which was the name of a "rag-and-bone picker" who sold mixed sweets and bottles of ginger-pop, but has been dead and buried for decades. And the man Karslake spoke with vanished after the party.

I think Stoddart's excursion into the past and reconstruction of Karslake's true identity makes up the best parts of the book, which deserved a better and stronger conclusion.

Haynes was rather vague or even contradictory about certain plot-details: when the body was discovered it was pointed out there were "two tiny burnt holes in the midst of the red stain," but the ending mentioned only one "sharp pop." Than there is the question of the locked bedroom door: did the murderer lock the door after the deed was done or was the key "knocked out of the way when the door was broken open," but, if the key was still on the inside of the door, then how did the murderer manage to escape from the bedroom? A police microscope confirmed that nobody left the room through the window. And, no, the scientific principle behind that conclusion was never explained either.

I wonder if Who Killed Charmian Karslake? was not entirely completed upon Haynes' passing and someone else had to come in to dot the I's and cross the T's, but overlooked these small, unanswered plot-details in what appeared as a nearly finished manuscript.

What really finished the book for me was the person who was picked to fulfill the role of murderer. It felt as a rather arbitrary choice and the moment I realized this person was the murderer I cringed. Cringed really, really hard.

So, in summation, I enjoyed a large swath of the story, but the plot collapsed in the final chapters, which is a shame, because it started out as a really good detective story.
Geplaatst door TomCat on 1/17/2016