I've not done as many single, or uncollected, short story reviews in 2020 as in the previous two years and, consequently, the number of short stories, mostly locked room mysteries, on my to-be-read list has swelled considerably – which means I'll probably do another anthology post towards the end of the year. But for now, I bring you two stories from two masters of the short detective story, Edward D. Hoch and Arthur Porges. 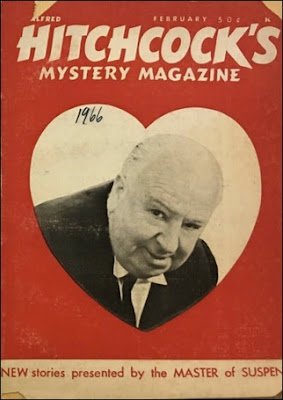 Porges' "The Invisible Tomb" was first published in the February, 1967, issue of Alfred Hitchcock's Mystery Magazine and is one of only four stories in the short-lived Julius Morse Trowbridge series.

Trowbridge physically resembles "a dissipated gnome badly hungover from too much fermented toadstool juice" with a vast, pallid face, but "inside the big, bullet-shaped head was a remarkable brain" – packed with "esoteric knowledge instantly available on call." Once he had been a child prodigy, graduating from Harvard at fourteen, until he broke down and fled the academic world. Now he lived as a 50-year-old man in "a ramshackle house," crammed with books, "where he acted as a kind of neighborhood Solomon" by handing out free and usually quite good advice "to all those who asked for it."

One of the people who regularly consults him is a policeman, Captain Gregg, who's often confronted with "seemingly impossible puzzles" involving "tricky hiding places."

This time, Captain Gregg is stumped by the inexplicable disappearance of a woman, or rather the disappearance of her body, because he knows her husband killed her. Neighbors heard them fighting again, before everything went eerily quiet. He claimed she had simply walked out of the house, but nobody had seen her leave and he had no opportunity to bury, or dispose, of the body around the house – a roomy suburb with miles of tidy lawns. So the body had to be somewhere in the house, but the police had searched the place for hours without finding anything. And they returned several times to see if they could catch the whiff of a decomposing body. But even that was missing.

"The Invisible Tomb" is only five pages long, closer to a short-short than a short story, but there are enough clues and hints to enable the reader to make an educated guess where the titular tomb is located. Not a classic of its kind, but a good and solid story that's perfect for its short length. I've always loved these type of impossible crime tales about invisible hiding places, phantom pathways and Judas windows that can only be used by criminals and detected by detectives.

On a related side note: I recommend everyone who's new to Porges to read the article "A Talent to Burn: A Guide to the Mystery Fiction of Arthur Porges" by Richard Simms. Porges was a massively underrated mystery writer who deserves to be rediscovered! 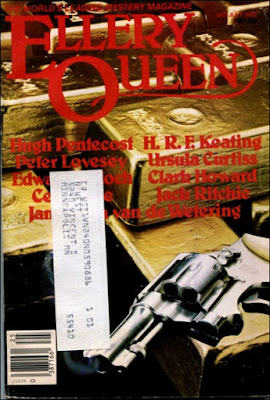 "The Flying Fiend" was originally published in the mid-July, 1982, issue of Ellery Queen's Mystery Magazine and is part of Hoch's short-lived series of lighthearted tributes to the Great Detectives of the Golden Age, embodied by Sir Gideon Parrot (pronounced parroe), whose name recalls two of the all-time great detective characters – John Dickson Carr's Dr. Gideon Fell and Agatha Christie's Hercule Poirot. Two of the five stories in the series are full-blown homages to the impossible crime story.

"The Flying Fiend" finds Sir Gideon Parrot on holiday on a small island retreat in the Strait of Georgia, on the American-Canadian border, where he learns upon arrival that a maniac is terrorizing the cluster of islands. Several weeks ago, the body of a young man was found on the beach with his throat cut, but there were no footprints except his own leading up to the spot. So everyone figured the sleeping man had been attacked by a buzzard, "believing he was dead." This was only the beginning.

Some time later, a sunbather was killed under identical circumstances and she was immediately found by her husband, who heard her scream, but, when he arrived, there was nobody else in sight – no other footprints but the victim's own. Another man is killed, on one of the Canadian islands, while all alone on the beach. Sir Gideon arrived in time to be there when the fourth murder is announced. And this time, the murderer left a calling card.

I didn't know exactly what to expect from "The Flying Fiend" going into it and the opening pages suggested that uncovering a hidden link between the victims was going to be more important than the impossibilities. The names of some of the victims, such as King and Quinn, were very suggestive. I began to half suspect that the murderer was in a boat and used a fishing took (like a steel-gaff hook) to kill, but the story proved to be more interesting as an impossible crime story than as a who-or whydunit. Hoch used something here that has turned up in other impossible crime stories from the 1970s and '80s. Amazingly, they all managed to get something completely different out of it, in presentation and solution, with Hoch's contribution being the most conventional of the lot.

So a good and fun detective story for most readers, but an item of interest for locked room and impossible crime fiends!
Geplaatst door TomCat on 10/01/2020