A year ago, Black Heath resurrected the long-forgotten, criminally underappreciated Harriette Ashbrook by republishing her Spike Tracy series of seven novels, originally published between 1930 and 1941, which can now be marked as one of the best and most consistent bodies of work of the American detective story – sporting clever plots, lively characters and originality. Some of her novels were a good decade ahead of their time and likely contributed to her breakneck plunge into obscurity. 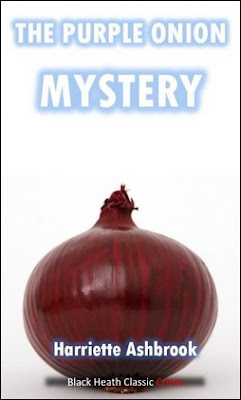 Ashbrook began conventionally enough with The Murder of Cecily Thane (1930) and The Murder of Steven Kester (1931), which are lighthearted takes on the Van Dine-Queen School, but The Murder of Sigurd Sharon (1933) was both a game changer and a rule breaker. An original piece of detective fiction praised by both Nick Fuller and John Norris. A Most Immoral Murder (1935) is a relatively minor detective story, but with a moving and original motive. Ashbrook reached her zenith with the superb Murder Makes Murder (1937) and the excellent Murder Comes Back (1940). This brings me to the last title in the series.

I approached The Purple Onion Mystery (1941) with some trepidation because it's the only title in the series that has gotten decidedly negative or lukewarm comments and reviews.

Mike Grost "thought it was awful" and a contemporary reviewer called it "tame game," which made me suspect that the series was going to end with a whimper instead of a bang, but now that I've read The Purple Onion Mystery, I can describe it as a very fitting end to the series – as it incorporated elements from all of the previous novels. The Purple Onion Mystery takes the same good natured, lighthearted approach to the Van Dine-Queen detective story as The Murder of Cecily Thane and The Murder of Steven Kester, but with an original motive and backstory as dark and serious as those found in A Most Immoral Murder, Murder Makes Murder and Murder Comes Back. So it turned out to be a better and stronger conclusion than expected!

The Purple Onion Mystery finds our playboy detective, Spike Tracy, drunk and hijacking a taxicab, as part of a drinking game, with a young couple inside and wakes up the following morning in the apartment of Cassie Framp. A middle-aged woman who shares the place with another woman, Miss Anne Penton, who was in the taxicab. Cassie cooks him a fine breakfast and would have been the end of a fun night in the city, but then "the long arm of coincidence" is stretched "from here to hell and back again."

Inspector Herschman, chief of the New York homicide squad, calls on Spike and pressures him into taking charge of a red hot murder case. Spike is not only given full reign over the investigation, but pretty much spends the whole case impersonating a police officer and never bothers to correct people who think he's a real policeman. I'm not jealous. Just disgusted with a world in which this isn't an actual possibility. I would make a great amateur detective! 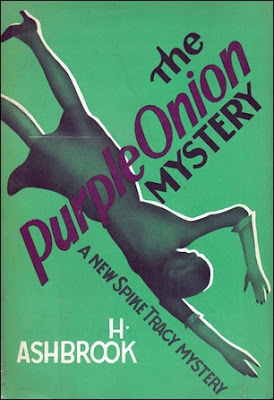 The murder in question is that of Lina Lee, "beautiful and crooked," who was the personal secretary of the president of Penton Press, Felix Penton. Lina Lee had been shot in her office, where she lay over the weekend, but, when her body was finally discovered, two people have unaccountably disappeared – namely Felix Penton and Stanley Bishop. Their names appear in the logbook of Friday evening together with that of Helen Martin. A character who's "trying to act like a 'mystery woman' in a detective story" and she's not the only one to assume that role. One of the main characters has an almost unearthly link with mysterious veiled woman, dressed in all black, who "always appeared like a deus ex machina" to extricate him from a dire situation. The first time happened on the Western front of the First World War. A very well done plot-thread that was neatly tied to the solution.

It's not just the parade of vanished, incapacitated, lying and ghost-like suspects and witnesses making things needlessly difficult for Spike, but the physical clues, such as emerald jewelry, jagged pieces of paper and a little purple-skinned onion, tell a muddled story. They actually turn out to be supporting evidence with all the tell-tale clues hidden in the characterization and dialogue (very Christie-like) that revealed a rare kind of criminal (ROT13: n fvyrag fgnyxre/yhexre qevira gb zheqre).

However, if you've read the previous novels and have some idea how Ashbrook's mind worked when she plotted her detective stories, you can instinctively guess the murderer's identity and motive with the rest of the story filling in the blanks. A bit of a double-edged sword since you can only truly appreciate The Purple Onion Mystery, if you have read the previous novels. You almost get the idea Ashbrook wrote it as a fond farewell to her readers as she began to move away from the detective story to try her hands at writing suspense thrillers as "Susannah Shane."

So, no, The Purple Onion Mystery is not the best detective novel Ashbrook produced during her too short career, but it's still a very readable, solidly plotted and fitting end to the series with a plot drawing on previous novels – like a band playing its greatest hits. If I have anything to complain, it's that Patsy didn't return to play Jeff and Haila Troy with Spike. Something that was vaguely alluded to in Murder Comes Back. Otherwise, The Purple Onion Mystery comes especially recommended to fans of the series, but readers new to Ashbrook are advised to begin at an earlier point.
Geplaatst door TomCat on 10/18/2020