"Eh bien, Mademoiselle, all through my life I have observed one thing--'All one wants one gets!' Who knows... you may get more than you bargain for."
- Hercule Poirot (Agatha Christie's The Mystery of the Blue Train, 1928)

Last year, I reviewed A Most Immoral Murder (1935) by Harriete Ashbrook, who also wrote suspense fiction under the name of "Susannah Shane," which tend to be smart, lively and well-plotted detective-and thriller novels, but most book reviewers at the time gave her a short shrift – resulting in paperback publishers largely ignoring her work. So she has rarely been reprinted and this condemned her to almost complete obscurity. And the keyword there is almost. 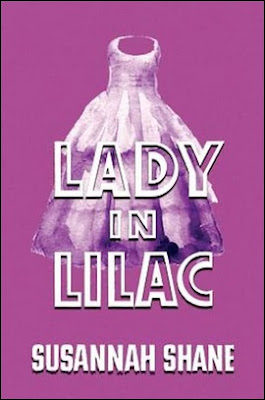 One of the usual suspects, John Norris of Pretty Sinister Books, wrote a positive blog-post about her work, The Detective Novels of Harriete Ashbrook, drawing comparisons with S.S. van Dine, Ellery Queen, Mignon G. Eberhart and Craig Rice. That was enough to place Ashbrook on my radar and we ended up agreeing that she got the short, grubby end of the stick in life (as she also died at the age of 48).

After finishing A Most Immoral Murder, I really hoped some of Ashbrook's other detective novels would make it back into print and (sort of) got my wish.

Recently, one of Ashbrook's dames-in-danger suspense novels was reissued by Coachwhip and the book in question, Lady in Lilac (1941), was originally selected as "a $1,000 Red Badge Prize Mystery" – representing one of her scarce triumphs as a published authors.

Lady in Lilac has been called a Woolrichian suspense novel on account of a plot-device apparently closely associated with the Father of Noir, which involves two strangers exchanging their identities. An impulsive decision that will place two women in mortal peril.

Helen Varney is an aspiring actress, who moved to New York, but in the five weeks she has been in the Big City she "tried to see every manager in town" without result and is down to half a dollar. And she's already two weeks behind on her rent. So Helen is forced to put her dreams on hold and take a job as a waitress, but fate appears to intervene when she saves the life of a woman, named Joanna Starr, who attempted to end her own life in the adjacent apartment – which has far-reaching consequences. Helen tells Joanna about her dreams and how she, one day, will get hold of a famous manager, like Hugo Steinmark, and get her chance to prove herself.

Coincidentally, Joanna has an appointment with Steinmark, but also longs to escape from the complications of her own life. So she offers Helen her identity in exchange for a quiet, uncomplicated existence as a simple, unknown waitress in a New York Diner. In return, Helen receives an audience with Steinmark and an opportunity to experience untold luxury.

There's a lavish hotel room at the Waldorf in Joanna's name and she traded a fat roll of five-hundred dollar bills for the last fifty cents in Helen's pockets, which Joanna assured could be spend as she pleased. So their personal situations were completely reversed overnight and Helen experienced what it is like to shop for clothes without "the constraints of a budget," but she also learned that there's no such thing as a free lunch.

During her long-awaited meeting with the theatrical manager, Steinmark is fatally shot and the unseen murderer threw the pistol into Helen's lap. This has the unfortunate result that she was seen standing over the body with a gun in hand and she immediately high-tailed it out of there. However, everyone is now looking for the enigmatic woman in the lilac dress and bloodstained slippers. A woman who appears to have two identities! 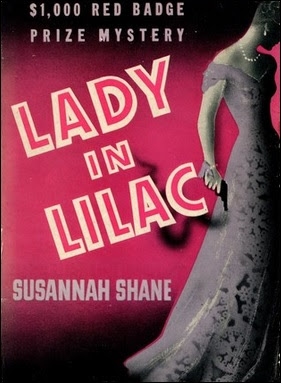 The confusing caused by having assumed Joanna's identity is what allowed Helen to move through the city without being recognized by the public at large, but one of the people who knew Joanna intimately has catched up with her – a man named Paul Saniel and really wants to know what she has done to Joanna. Helen is not entirely convinced of Paul's good intentions and refuses to tell him the full story, which only complicated her personal predicament even further. And there are other stumbling blocks entering the picture in the background: a case of bigamy, an unsolved kidnapping/murder case obviously based on the Lindbergh affair, a suitcase with a secret and an Austrian actress who suddenly turned up in the United States.

There are two things I really appreciated about Lady in Lilac: one of them is the surprising complexity of the plot, full of twists and turns, which neatly tied all of its plot-threads together by the final chapter. You should not expect a plot à la Agatha Christie or John Dickson Carr, but it was more than what I hoped to find between the covers of a woman-in-peril thriller. So that was a pleasant surprise. Secondly, I liked the use of newspaper headlines and excerpts that keeps both the reader and the characters in the story abreast of the latest developments in the case on the official end of the investigation.

It showed how the case captured the public imagination, but also explained to the reader why Helen continued to be unrecognized even when the police learned she was involved in the case under Joanna's name. Additionally, the story includes excerpts of an article penned by Lance Sheriton, an "ace detective story writer," who had been hired by the Gazette to write an exclusive reconstruction of the case with a final summation penned by the official sob sister of the paper. I liked how newspaper excerpts were used to tell parts of the story.

My sole complaint about the book is the sugary ending that was far too sweet. Ashbrook probably wrote the ending with a possible movie deal in mind, but she allowed a character to live who had been riddled by bullets. She should have allowed that character to be embraced by death, because it would have strengthened the sweet part of the ending. Granted, it would have made it a bitter sweet ending, but now it was one of those having your cake and eating it too endings.

Otherwise, Lady in Lilac is an excellent, fast-paced suspense novels and really hope more of her books reappear in print in the years ahead. Both her detective and suspense novels.
Geplaatst door TomCat on 7/21/2017