"As a general rule, in order to find the author of a crime or a theft, it is necessary to determine how that crime or theft was committed, or, at least, how it could have been committed."
- Chevalier Floriani (Maurice Leblanc's "The Queen's Necklace," collected in The Extraordinary Adventures of Arsène Lupin, Gentleman-Burglar, 1907)

The 61th entry in Gosho Aoyama's voluminous series, known as either Case Closed or Detective Conan, opens with a first-rate Kaito KID story, showing the brightest pupil of the modern-day Rogue School at work, which offers a very cunning and original impossible problem – namely a teleportation trick! 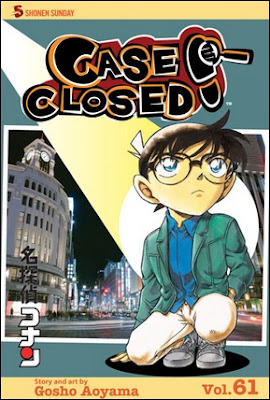 During his first appearance, Jirokichi attempted to capture the dashing, white-clad thief by baiting a trap with a priceless artifact of history, but KID simply used this opportunity to showcase one of his most daring illusions: a miraculous mid-air walk. So the billionaire learned from his previous mistake and devised a new scheme to ensnare "the infamous thief known as the moonlight magician."

Jirokichi is in possession of "the legendary shoes worn by Maria Theresa," the Holy Roman Empress, which has a two large amethysts embedded in the toes. Something that should attract the attention of KID, because he always appeared to have "a thing for large jewels," but to be sure an open challenge was published in the newspaper.

However, the slippers weren't securely placed in a heavily guarded, inaccessible room on the top-floor of a closely observed building, but were simply put on display in the middle of the Ginza shopping district and surrounded by only four security guards – reasoning that KID is vulnerable when operating at ground level. After all, the street level display eliminated the possibility of KID fleeing the scene with the assistance of his beloved hang-glider. So, when he swooped down from the sky, Jirokichi gave the order to raise several large, tight nets that blocked every avenue of escape on the Ginza Crossing and it appeared as if the elusive thief had finally been captured. Or so everyone assumed.

KID simply turned to the rolling cameras and announces his impending escape from the enclosure by crossing dimensions, which is followed by a puff of smoke and twenty seconds later reappeared on the rooftop of an adjacent building – a stunning trick accomplished without the assistance of a body-double. Something that is confirmed when the TV footage is closely scrutinized. And the great magician promises a repeat performance the following day, because one of the slippers he snatched from the display proved to be a fake.

So this gives Conan, who had been watching in the crowd, one shot to stop his adversary from completing his criminal masterpiece, which also results in some nice interaction between Conan and KID when the latter becomes aware of the former's presence. The trick itself was also pretty nifty and more workable than the levitation/mid-air walk illusion from the previously mentioned 44th volume. I (roughly) worked out how the teleportation stunt was pulled off, but only because I remember a story that used the same principles for an entirely different kind of trick.

Nevertheless, this was a nice, well put-together impossible crime story with some great (visual) clues and Jirokichi is proving himself to be a better foil to KID than Conan. Sure, Conan has the brains and deductive abilities to shatter KID's illusions, but Jirokichi has the resources needed to pose a genuine challenge for the modern-day Arsène Lupin. I really hope these three characters cross paths again in the future.

The second story in this volume involves the Junior Detective League and takes place during one of their many camping trips, but this time they're stranded on a lonely stretch of mountain road – because Doc Agasa forgot to put enough gas in the car. Luckily, the spot a classic Rolls Royce heading their way, but the driver is incredible rude and leaves them without helping them. What's even more discouraging is that the car is headed to the only habitable place in sight: a large, sprawling and luxurious summerhouse at the top of the mountain. However, an explosion occurs at the place shortly after the car must have arrived at the top. 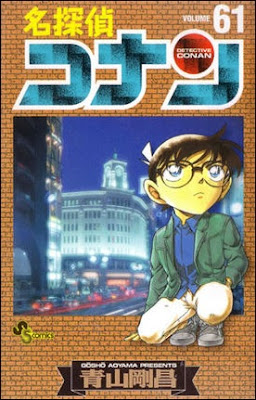 When they arrived at the summerhouse, they find that a fiery explosion had occurred in the garage and the driver has been burned to a cinder. The police is of the opinion that the death was an unfortunate accident: a tipped over gas can had filled the garage with vaporized gasoline and a burning cigarette ignited the gasoline that engulfed the car – causing the explosion. However, the police only found a cigarette butt, but not the remains of a pack of cigarettes. And this suggested murder to Conan.

This story is purely a howdunit, as the murderer's identity is pretty obvious, which instead concentrates on how this person created the fire that blew the victim sky-high. A clever method that's believable enough, because it was revealed that it had failed several times before and had to be tweaked. Some of the tweaks served as a clue. Only the motive was poorly handled.

The third story is one of those code crackers, but the problem mainly serves as a vehicle for a story-line that was introduced in the previous volume.

Someone has been littering the streets with paper airplanes, all with patterns on them, which is blamed on a prankster, but Conan recognizes an SOS in the patterns. However, he's stuck at school and can only communicate with Rachel over the phone, as Jimmy Kudo, while Subaru Okiya (who stays at the Kudo home) also tries to crack the code at their end of the phone. The case primarily shows that Okiya is not who he says he is and it is suggested that he may be the Black Organization agent known as "Bourbon," but, based on the Sherlock Holmes comments from the previous volume, I very much doubt that is the case.

Finally, the last chapter opens a story that will be concluded in the next installment in this series and concerns the missing brother of the waitress of Coffee Poirot, Azusa, who is suspected by the police of having shot and killed his employer with a hunting rifle – ending on a note implying that Azusa may be in grave danger. But more about that the next volume.

So, all in all, a pretty solid volume with some excellent plot-and character-driven content and the Kaito KID story served as a perfect headliner. Once again, I really loved this series and might pick up the next volume sooner rather than later.
Geplaatst door TomCat on 7/14/2017