"Moral wounds have this peculiarity—they may be hidden, but they never close; always painful, always ready to bleed when touched, they remain fresh and open in the heart."
- Alexandre Dumas (The Count of Monte Cristo, 1845-46)

The Death March of Young Kindaichi is a four-part (episode) story-arc in the recent Kindaichi Shounen no Jikenbo R (The File of Young Kindaichi R) anime series, but the story originally appeared as a series finale for the original comic-book run in the early 2000s – only to be resurrected in 2004. Obviously, the plot betrays that the story was initially intended to be a curtain closer. 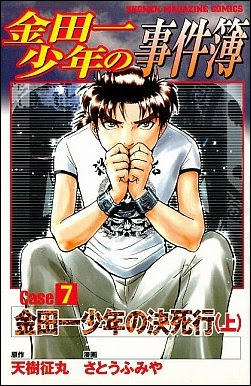 The first episode opens with arrival in Hong Kong of Yoichi Takato, "The Puppeteer from Hell," who designs perfect crimes for people with an insatiable hunger for revenge. Takato learned of the existence of someone who's absolutely famished!

Upon his arrival, Takato travels to the remnants of an abandoned hotel and blasts a hole in a wall leading to a warren of underground passages stocked with long-forgotten, World War II-era supplies of the Imperial Japanese Army, but someone had been sealed inside those dark tunnels – surviving on canned food and rodents. Hell's Puppeteer christens this person "The Count of Monte Cristo" and promises to help extract revenge on the people who locked him inside, robbing him of sunlight for the past 18 years, by writing "the scenario for the perfect crime." A perfectly diabolical scenario casting his nemesis and high-school detective, Hajime Kindaichi, in a very special and precarious role.

Kindaichi, Miyuki and Inspector Kenmochi are en route to Hong Kong in order to attend a magic show by an illusionist known as Maskman, which is stage-name once used by Takato. The show is hosted by the King Dragon Hotel, a replica of the ruined one, but, when they arrive, there's already a police presence, because the person who rebuild the hotel has been kidnapped. However, this is only a minor plot-thread that mainly serves the story by making sure the police is on hand when the body starts hitting the floor.

On a brief side note, Police-Detective Li of the Hong Kong police previously appeared in The Hong Kong Kowloon Treasure Murder Case, which now might be the next set of episodes on my watch-list.

Anyway, Kindaichi attends the magic show and Maskman asks him to climb on the stage to be hypnotized, but the hypnotic spell only appears to take effect when he returns to his hotel room. One that threw him in a foggy trance.

Later that night, Kindaichi is found staggering across the second-floor hallway of an unoccupied part of the hotel, groggy-eyed and confused, without any recollection of how he got there, which becomes a problem when he learns a woman has been murdered on that floor and all of the exits sealed – which means that nobody but him could have murdered the woman. Luckily, Detective Li holds him in high regard and gives him the benefit of the doubt, but this changes when there are several eyewitnesses to an attempted murder and everyone (including the viewer) saw it was Kindaichi who wielded the knife. Even more shocking is that the victim is Kindaichi's friend and rival, Superintendent Akechi.

Maskman claims his hypnotic spells "awakens desires deep within the human heart" and murder must have been in the heart of Kindaichi, because it has always been on his mind. Takato even taunts him over the phone by saying that, somewhere in his heart, he "longed to be rid" of his rival. So Kindaichi decides to break out of the hotel and find the real murderer, which he does with a surprising alley at his side: a 10-year-old boy, Chao Longtao, who works at the hotel as a bell-boy.

However, the part about proving his innocence is harder than expected, because they keep stumbling across bodies and Kindaichi is always the last person to have handled the murder weapon – whether it's a blood-stained knife or a smoking gun.

So, as you can gather from my plot-overview, the episodes is very much what you'd expect from a story (originally) meant as a series finale. You have the protagonist in serious trouble and a number of familiar faces turning up again to take their curtain call, but how does the plot measure up. Was it a worthy closer to the original series? Well, yes and no.

First of all, there's are the (quasi) impossible situations, which are basically stage illusions ("murder magic"), but appreciated their clever intricacy. However, it should be pointed out that their execution required impeccable timing, steely nerves and a good portion of luck, because everything had to go exactly as envisioned in an uncontrolled environment. Something could have easily gone wrong under such circumstances. For example, if one of the policeman was quicker than anticipated and reached the elevator, before the door closed, the sealed floor murder would not have worked. Similarly, Kindaichi staggered in the wrong direction nobody would have seen him planting a knife in Akechi.

So using the props and principles of a stage illusion to create a seemingly impossible murder, or two, can be a tricky business.

However, the impossible situations, despite the risk, were better handled than the identity of the Count of Monte Cristo. I fully appreciate the Agatha Christie-like attempt at playing an unusual card from the least-likely-suspect deck, but the problem is that this person was obviously involved in the Puppeteer's scheme. I even guessed (sinful, I know) how the apparent impossibility of this person being the actual killer could be explained, which was confirmed when the photographic clue was introduced in the third episode. That clinched it for me.

There is, however, the question how believable the murderer is. I know you can get away with more in comic-books and animation, but even with that in mind it felt like they were taking some liberties with their artistic license.

In closing, The Death March of Young Kindaichi is not one of the best sets of episodes in this series, but not particulary bad either and should primarily be watched as a detective-in-peril story, like Patrick Quentin's Black Widow (1952), while the impossibilities and the unusual murderer should be seen as plot-extras – which should help making some of those weaknesses more forgivable.