"These murders are not native to this place. They have been planted here by the devil, or some of his agents."
- Mrs. Bradley (Gladys Mitchell's Death and the Maiden, 1947)

Ruby Ferguson was a British writer of romance fiction and children's book, whose romantic novel Lady Rose and Mrs. Memmary (1937) was reportedly a personal favorite of the Queen Mother and her books for girls have remained in print longer than any other pony series, but she also produced several obscure, long-forgotten detective stories – published under her maiden name of R.C. Ashby. Several of them received glowing reviews by John Norris and Nick Fuller.

Unfortunately, Ashby's detective novels are little-known rarities on the secondhand book market and the 2009 reprint of Death on Tiptoe (1931) blinked out-of-print almost immediately upon its release. So most of her detective stories are hard to find and probably come with a hefty prize-tag, but an independent publisher of ghost and horror novels reissued one of her supernatural-tinged mysteries in 2013. And this edition is still in print! 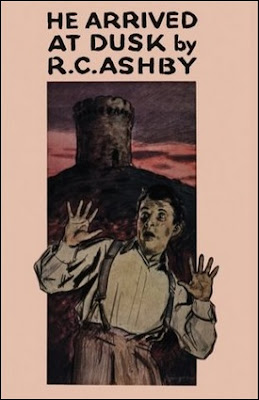 He Arrived at Dusk (1933) has been described as a head-on collision between Agatha Christie and Gladys Mitchell, which then, dazed and groggy, stumbled onto the pages of an M.R. Jamesian ghost story before finding its way back – since the story, unlike some comments suggests, is not a hybrid mystery. Personally, the book reminded me of Virgil Markham's Death in the Dusk (1929) as perceived by E.R. Punshon.

The narrative of the book is divided in three sections, all with a different narrator, which begins with "the inclusion of Mr. Mertoun's romance."

William Mertoun is an antiquarian who is commissioned by the reclusive Colonel Barr to value the content of his lonely house on the dark, wild moors of Northumberland in the North East of England. A desolate place where the very soil exhales its ancient history and the distant past is an integral part of the plot.

When the antiquarian arrives at his employers home, Mertoun discovers that his Colonel Barr is bedridden and the nurse, Miss Winifred Goff, has barred everyone from the Colonel's bedroom. Not even his nephew, Charlie, is allowed to see his uncle. Colonel Barr's health began to falter after his brother, Ian, fell over a cliff, which was ruled to be death by misadventure at the Coroner's Inquest, but the presence of sandal-prints at the scene has everyone whispering about a local legend, Vitellius Gracchus – a centurion's ghost who has wandered the region for over sixteen-hundred years!

A ghost with a historic tie to the grounds around the ancestral home of the Barr clan: a stone was uncovered in the cellar of the house and it showed "the traces of an inscription," which were "quite illegible," but over the years the words "ROMA" and "VITELLIUS GRACCHUS" began to form. According to the legend, the Roman soldier carved those words in a rock as he was dying from wounds sustained in his last battle with the Ottadeni. So does this restless spirit of the Roman soldier is out to kill the people who took possession of the place where he took his last breath as a living human being? Well, Mertoun slowly becomes convinced something malevolent is making its presence felt.

A painting is slashed to ribbons one night and a short, broad-bladed sword, "dark and corroded with age," materialized after a séance and was found driven into the wall of the library like King Arthur's sword. Only one of them managed to retrieve the sword from the wall with ease! However, the subsequent events is what pushed the poor antiquarian over the edge and explained his wrecked nerves at the opening of the book. One dark evening, when out on the moors, Mertoun gets a glimpse of the ghost when the beam of the distant lighthouse briefly illuminates the edge of the cliff. And, for a short moment, "the old, savage England raised its head" in the twentieth century.

On the following day, the body of a young shepherd, named James Blaik, was found by a two farm laborers on the moor with a Roman sword in his back. The shepherd had defied, "what he considered superstition," by sheltering his flock at night in the ruined and haunted tower on the hill. And all of these apparently supernatural phenomena and bloody murder culminates with the disappearance of Colonel Barr.

The second section of the book consists of diary entries written by Miss Goff's brother, Hamleth, who is one of the lighthouse keepers and his story is a departure from the ghost-ridden narrative by the antiquarian, which casts an entirely new and sobering light on the events that happened on the mainland – such as the role his sister plays in the Barr household. However, that all I can say about this part of the book without giving anything of vital importance away. 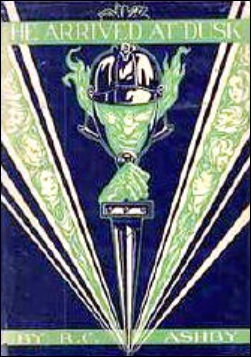 I can't tell too much about the last section, either, which is told from the perspective of a Scotland Yard detective and explains everything that had happened up to that point. This character does a fine and pleasant job in tying all of the plot-threads together and pointing out all of the foreshadowing that nodded in the direction of the eventual solution.

John Norris called He Arrived at Dusk "a little masterpiece of a book" and the material used by Ashby to construct the plot were absolutely first-rate, but the book (as a whole) failed (IMO) to reach the status of masterpiece, because there are anorexic ghosts less transparent than the final explanation. Don't get me wrong. The atmospheric and evocative writing was brilliant. The Northumbrian backdrop and suggestions of its haunted past stirring back to life were superbly conveyed to the reader. And some of the schemes, and counter schemes, were great. However, the identity of the murderer and the motive were pretty obvious from very early on. And that lessened the impact of the ending as it only confirmed what I suspected all along.

Still, He Arrived at Dusk is a pleasant, shuddery read that, not entirely unsuccessful, attempted to marry the ghost yarn to the detective story, which should also appeal to my fellow aficionados of John Dickson Carr. As matter of the fact, the book can be read as an interesting companion piece to the recently reviewed He Who Whispers (1946). Just keep in mind that Ashby, as a plotter, was not in the same league as Carr, but she sure knew how to write like him. So if you go into the book with that in mind, you'll probably walk away from it with an opinion that's probably closer to Norris' than mine.

Although, I should stress here that I really enjoyed the book. My complaint is merely a plot-technical one. Anyway, that my somewhat lukewarm report on this once extremely scarce mystery novel and probably have something equally rare for my next blog-post, but I might post something before that. I still have some things on my to-watch list and there several volumes of Case Closed on the pile. So we'll see what's next.
Geplaatst door TomCat on 7/09/2017