"Twin brothers, and doubles generally, must not appear unless we have been duly prepared for them."
- Msgr. Ronald A. Knox (A Decalogue: Ten Commandments for Detective Fiction, 1929)

The Echoing Strangers (1952) is Gladys Mitchell's twenty-fifth mystery novel about her incomparable, witch-like series-character, Mrs. Bradley, who is a consulting psychiatrist to the Home Office and probably had the longest lifespan of any detective from the genre's Golden Age – debuting in Speedy Death (1929) and bowing out in the posthumously published The Crozier Pharaohs (1984). During that fifty-five year period, Mrs. Bradley's cases filled the pages of sixty-six books and one collection of short stories (i.e. Sleuth's Alchemy, 2005). 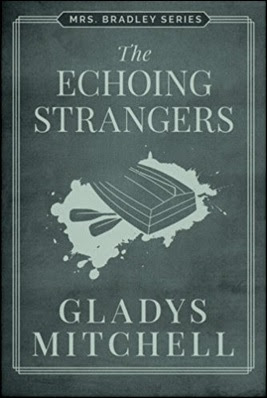 As a mystery novelist, Mitchell was as prolific as she was original and imaginative. However, she was not always as consistent in the quality department and even her greatest admirers acknowledged her output suffered a decline during the 1950s, which lasted until the seventies – when she reportedly returned to the fantastic plot-elements that defined her earlier detective stories (e.g. The Greenstone Griffins, 1983).

So that would place The Echoing Strangers in Mitchell's dodgy period, but the book is still held in high regard by Nick Fuller and Jason Half of The Stone House. And was recommended to me personally by John Norris in the comments on my review of Late, Late in the Evening (1976). Purportedly, the book is a bizarre mixture of identical twins, a homicidal grandfather, blackmail and cricket, but also stronger than usual on detection and clueing.

Naturally, my interest was piqued and placed the book on top of my to-be-read pile, but forgot all about it until my previous review brought it back to my attention for obvious reasons. Since it has been a year since the last time I looked at one of Mitchell's novels, I decided to finally pluck this often praised title from the big pile.

The Echoing Strangers opens with Mrs. Bradley traveling down to the village of Wetwode, situated on the River Burwater in Norfolk, where she planned to a pay a visit to an old school-friend of hers, but upon her arrival she discovers that a family emergency called her school-friend to Gateshead – which leads her to hire a boat and sail down the river. When she navigated "a pronounced bend" in the river, Mrs. Bradley witnessed a bizarre scene on the lawn of one of the river-side bungalows. A middle-aged woman being pushed into the water by "a slender, handsome youth."

The adolescent is a seventeen year old deaf-and-dumb boy, named Francis Caux, who was orphaned at age seven and subsequently separated from his twin brother, Derek, which done by their despicable grandfather, Sir Adrian. A truly villainous character reminiscent of Dr. Grimsby Roylott from Conan Doyle's "The Speckled Band" (from The Adventures of Sherlock Holmes, 1892).

Sir Adrian Caux abandoned his damaged grandson and placed him under the wing of a guardian, Miss Higgs, who Mrs. Bradley witnessed being pushed into the river by her ward. On the other hand, Derek was brought back to Sir Adrian's home in the village of Mede. Consequentially, Francis and Derek have not seen one another for nearly ten years. Or so everyone assumed. But the river incident places Mrs. Bradley on the scene when the first, of two, murders is committed that are closely intertwined with the Gemini game the brothers have been secretly playing.

Mr. Campbell is "a misanthropic naturalist" and local blackmailer, who loved to observe "courting couples through his field-glasses," but someone had battered in his skull and his assailant found an original way to dispose of the body – attaching the remains to the bottom of dinghy by iron bands and staples. And the dinghy belongs to Francis!

Meanwhile, Sir Adrian engages a schoolteacher, named Tom Donagh, as a holiday tutor for Derek, but specified in the advertisement an "opening batsman and slip fielder" is "preferred." Even asking any applicants to supply their "last season's batting average." Sir Adrian loves cricket and heads the village cricket team, which in one scene has to play against the patients and doctors of "a sort of second-class Broadmoor." However, the main event is the annual game against the team of the village's longtime rival, the neighboring village of Bruke, but the game ends with the murder of the visiting captain, Mr. Witt, whose body was found in the showers of the cricket pavilion – beaten to death with his own cricket bat. Once again, the victim was a known blackmailer and Derek lacked a much needed alibi. 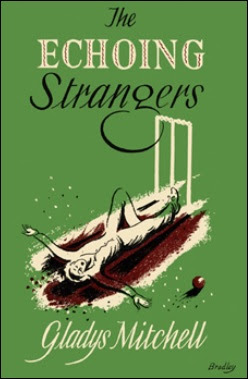 Evidently, this is a case requiring the hand of an expert and, luckily, Mrs. Bradley is in superb form with her eccentricities almost completely expunged. So she doesn't poke any ribs with a yellow claw or let loose a sudden, pterodactyl-like shriek that can be interpreted as a form of laughter. She sinks a lot of time in questioning the people occupying the neighboring bungalows in Wetwode case or theorizing about the role of the twins in the cricket murder in Mede. Despite being in top form, Mrs. Bradley is slightly reluctant to solve both murders.

After all, the victims were known blackmailers and they were about as popular during the Golden Age as kiddie diddlers are today. Mrs. Bradley is of the opinion that blackmailers are worse than murderers and considered the killing of these "poisonous pests" to be "a distinct gain to society," which is a sentiment often found in detective stories up to the 1960s and a very famous example can be found in Conan Doyle's "The Adventure of Charles Augustus Milverton" – collected in The Return of Sherlock Holmes (1905). She would not have touched the case had she not been plagued by "a personal desire" to know if and how the twin brothers are involved. And the role Francis and Derek played in the story also showed Mitchell was at the top of her game.

Mitchell does not underestimate the intelligence of her readers and confirms before the halfway mark what most have probably figured out by that point, but this revelation only complicates the case even further. And it definitively turns the story in who-did-what-and-why instead of a traditional who-dun-it, which actually makes the book more mystifying than you would expect. The presence of identical twins in a detective story can be a spotty business, but The Echoing Strangers is one of the rare exceptions and arguably the best possible use of the Gemini gimmick. I would even argue that the twins were put to better use here than a certain and somewhat famous Ellery Queen novel from the 1950s, because the reader here is mystified by throwing pretty much all of the cards on the table.

This well-written, cleverly constructed story succeeded in being both utterly simplistic and maddeningly complex at the same time. Not an easy accomplish, but Mitchell pulled it off. She also deserves praise for the creative explanation that answered why the murderer used such a round-a-bout way to dispose of Campbell's body. Mitchell always had a penchant for bizarre murders (e.g. severed head in the snake-box in Come Away, Death, 1937), but this was a particularly good one. It showed the truth behind the Shakespearan saying that, sometimes, there's method to someone's madness!

Once everything has been revealed and explained, a dark, grim shadow falls across the characters and the story ends on a tragic, but inevitable, note driving home the truth that this is one of Mitchell's greatest triumphs. One that ranks alongside the previously mentioned Come Away, Death, The Mystery of a Butcher's Shop (1929) and St. Peter's Finger (1938).

Personally, I'll never understand people who don't like Mitchell, but The Echoing Stranger has convinced me to return more often to her fantastic detective stories. Luckily, I have several of her reputedly good and excellent titles on the big pile, which includes The Longer Bodies (1930), the illustrious The Devil at Saxon Wall (1935), Brazen Tongue (1940) and Groaning Spinney (1950). I also want to know whether Laurels Are Poison (1942) is as good as scholastic mystery as Tom Brown's Body (1949) and want to read Death of a Delft Blue (1964) for obvious reasons. So don't touch that dial!
Geplaatst door TomCat on 7/31/2017