Rebellion in the Shadows

"I am a man... and therefore have all devils in my heart."
- Father Brown (G.K. Chesterton's "The Hammer of God," collected in The Innocence of Father Brown, 1911)

I attempted to take a break from the locked room mystery, which has been dominating this blog more than usual, but Ellis Peters' One Corpse Too Many (1979) failed to hold my attention and bailed on the book – swapping it for a historical detective novel by Paul Doherty. However, the title in question turned out to be a cornucopia of miracle crimes! 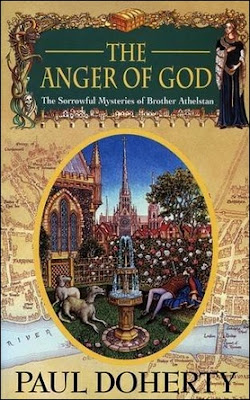 The Anger of God (1993) is the fourth entry in "The Sorrowful Mysteries of Brother Athelstan" and was originally published as by "Paul Harding," which takes place during the warm summer days of 1379.

A "mere child," Richard II, sits on the throne of England, but power "rested in the grasping hands" of his uncle, the Regent, John of Gaunt. The Regent seems to be unable to bring peace and stability to the troubled Kingdom: French galleys were raiding towns along the Channel coast, while the Scots were terrorizing in the border towns in the North and the peasant class, "taxed to the hilt," were plotting bloody rebellion – referring to themselves as the Great Community of the Realm. A secret society operating under the leadership of a shadowy, cowled figure known only as Ira Dei (Anger of God).

John of Gaunt countered these potential threats by attempting to unite the warring factions of the wealthy, London-based Guilds. As a token of their goodwill and support of the regent, the merchant princes each placed an ingot of gold in a specially constructed, iron-bound treasure chest with six separate locks. Only they, as a group, can open the chest with their personalized set of keys. Or so they assumed.

The fragile alliance between the Regent and the Guildmasters is placed in jeopardy by a string of seemingly impossible murders and the inexplicable disappearance of the gold ingots from the locked, iron-bound chest, which were replaced by a letter stating the bars were taken, as a tax, by the Great Community – signed by Ira Dei. But the problems don't end there for the beleaguered Regent.

One of London's most feared Sheriffs, Sir Gerald Mountjoy, was found stabbed to death in his enclosed garden, guarded by two vicious dogs, but the murderer managed to do this without being seen by the victim or rousing the dogs. Something that seems next to impossible. An equally baffling stabbing occurs, halfway through the book, when someone witnesses the murder of a locksmith. However, the witness failed to observe the assassin who delivered the fatal knife-blow.

And wedged between those two stabbings, there's a poisoning during a royal banquet, where the King and Regent were present, but the problem is that the poisoned Guildmaster ate the same food as everyone else sitting at the circle of tables – raising the question how a deadly poison could have been administrated.

Sir John Cranston, King's Coroner in London, has a full plate with all of these miraculous murders and impossible thefts, but he also has a personal problem occupying his mind. One of his old comrades in arms, Sir Oliver Ingham, prophesied his own death by the hand of his young wife and asked Cranston to bring her to justice in case of his untimely demise. There is, however, one problem: the body is bare of any marks of violence and no trace of poison is found. Nevertheless, Cranston is convinced his old friend was foully murdered and swears his killer will "dance at Smithfield on the end of a rope."

Meanwhile, Brother Athelstan, the Parish Priest of St. Erconwald's in Southwark and Cranston's secretarius, has to contend with a case of demonic possession among his flock. A young woman is apparently possessed by a malevolent entity who accuses her father and stepmother of having poisoned her mother with red arsenic, which is a very specific accusation. 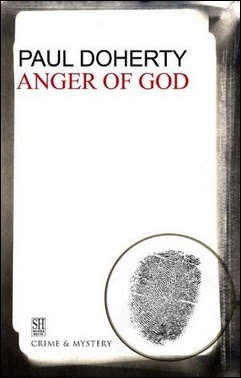 Oh, and there's one more plot-thread: someone was filching the amputated limbs and severed heads of executed criminals and traitors, which were displayed on spikes above the London Bridge as a stern warning. So snatching these body parts can be considered a grievous insult to the laws of the land.

You can say that the plot of The Anger of God is as loaded as a musket packed to the muzzle with black powder, scrap-iron and ball shot. Surprisingly, the plot still comes across as very lean and comprehensible. And the reason for this is both a strength and a weakness of the book.

All but one of the answers provided to the various problems were simple, uncomplicated explanations, which ensured the events depicted in the tapestry of plot-threads were easy to follow. On the other hand, some of the plot-threads, such as the demonic possession and the stolen body-parts, turned out to be so slender and inconsequential that they should have been cut from the book – while the plot-thread about the murder of Sir Oliver should have been written as a separate (short) story. The central idea behind this story had legs, but was completely buried under the other material of the overall plot.

So, what we're left with are the impossibilities, which were, by and large, nicely done with the sole exception of the theft of the gold ingots, which was a cheat. The explanation for the impossible poisoning at the royal banquet probably won't leave you absolute thunderstruck with surprise, but the method has an elegant simplicity that is strengthened by the backdrop of the murder. One really complemented the other.

Lastly, there's the assailant who knifed two people without being observed by an eyewitness or alarming a couple of vicious guard dogs. The gimmick behind these two stabbings is a bit more involved and tricky, but the experienced armchair detective will have no trouble, whatsoever, in figuring out how it was done – since the trick is a slight variation on an old, well-established ploy. However, it was nicely put to use here and (once again) fitted the backdrop (i.e. time-period) of the story.
So, you can argue that Doherty attempted to cram too much into the plot, but can that really be deemed a drawback? After all, The Anger of God was published in the early 1990s, which is a period in the genre when detective stories sorely needed some plot density. Doherty provided that in spates! In any case, the plot-packed book made for an engaging read that always had something on hand to throw at the reader. And that's something you can't help but appreciate.

All in all, The Anger of God does not reach the same heights as some of Doherty's absolute best (locked room) novels, but it is a busy, immersive detective story set during an tumultuous period in (English) history.

On a final note, I found a promising detective novel (without an impossible crime) for my next read. So that break mentioned at the start of this blog-post is coming. So don't even dare to think about touching that dial!
Geplaatst door TomCat on 7/03/2017