Alfred W. Stewart was a Scottish chemist and university lecturer who penned seventeen detective novels, all of them published under the name of "J.J. Connington," which were well received by readers and garnered praise from high-profile critics – such as T.S. Eliot and Jacques Barzun. Yet, despite all of the praise and popularity accumulated over a two decade career, Connington slipped into almost complete obscurity after passing away in 1947. 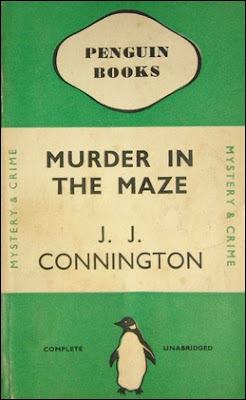 Only a handful of dedicated readers and genre historians were aware of Connington's Sir Clinton Driffield mysteries at the dawn of this century. Something that's only recently begun to be remedied when his work appeared on the radar of several (reprint) publishers.

Lately, Coachwhip and Murder Room republished practically every single title in Connington's bibliography. Since then, I keep coming across reviews, here and there, continuously reminding me that there's a beaten-up, yellowed paperback edition of Murder in the Maze (1927) on my bookshelves – which had been stuck there for the better part of a decade. So finally decided to take it down and see what all the fuzz is about.

Murder in the Maze is Connington's third mystery novel and constituted the debut of his series-character, Sir Clinton Driffield, who is the Chief Constable of a fictitious county and has a local landowner, Square Wendover, acting as his Cap. Arthur Hastings. Some readers have compared him to Dr. Watson, but Wendover impressed me more as a character along the lines of Hercule Poirot's loyal companion. Anyway, Sir Clinton happened to be staying with Wendover at Talgarth Grange when a double murder occurred in the neighborhood.

Neville and Roger Shandon are two elderly twin brothers, living at an estate called Whistlefield, who made a name for themselves in different fields and earned some money along the way.

Neville is a barrister, or King's Counsil, with the reputation of being "a brutal and domineering cross-examiner." On the day after tomorrow, Neville is expected in court to cross-examine the head-figure in the Hackleton case, "an infernal tangle," which will be transferred from the Law Court to the Criminal Court when a breach of contract can be demonstrated – which would make Neville's removal very convenient. Something that's pointed out by his own family. Roger's "rise to prosperity" is very shady and all what's known is that he made his money in South Africa and South America, but the ghosts of his "disreputable past" have come back to haunt him.

So they both could use some privacy, to work or simply be alone, which is where the titular, double-centered, hedge maze down by the river comes into play.

The Whistlefield Maze is "a relic of earlier days," when garden labyrinths were fashionable, but the place was well kept and is exceedingly more complex in comparison to the mazes at Hatfield and Hampton Court. There was more than half a mile of twisty passages, dead ends and byways with "the shortest route to either of the centers" being at least "two hundred and fifty yards in length." So you really have to know the maze in order to find your way to Helen's Bowen (center 1) or the Pool of Narcissus (center 2) without getting lost. 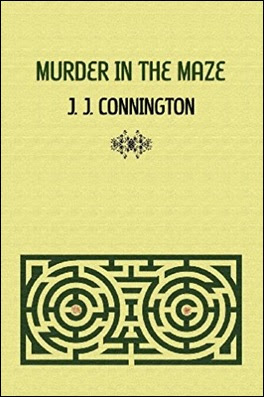 The centers are probably the best places to get away from the world, because there couldn't be possibly that many people wandering around its winding passages on any given day, right? Well, this is a 1920s detective novel and that means there were more people, than usual, walking around the maze around the same time a murderer struck. Twice!

Howard Torrance and Vera Forrest, who are guests of Sylvia Hawkhurst, a niece of the Shandon brothers, decided to have a frolic in the maze and make a little game out of their exploration, but suddenly, they hear "an inarticulate cry" – followed by an eerie silence. Someone had shot Neville and Roger with curare-dipped darts and the murderer was still running around the hedge maze, which makes for an excellent and memorable scene with a frightened Vera stumbling around the maze. And eventually coming across one of the bodies in the second center of the hedge maze.

Chief Constable Sir Clinton Driffield immediately takes control of the case and is confronted with a tangle of complicated possibilities and a liberal serving of red herrings. One of those complications is the possibility that the murders are connected to either the Hackleton affair or Roger's dark past, because they were twins and one of them could have been shot by mistake. After all, a shady person, named Tim Costock, was plucked out of the maze with a loaded pistol in his pocket.

There are, however, several possibilities a lot closer at home: Neville and Roger have a brother, Ernest, who was financially depended on them, but also a complete and utter coward. Sylvia has a younger brother, Arthur, who suffers from "occasionally flashes of abnormality" ever since "the attack of encephalitis lethargica." Arthur was an annoyance to his uncles and loved playing around with airguns, which gave the young man a potential motive and the means to kill his uncles. Lastly, there is Roger's private secretary, Ivor Stenness, who possesses the "efficiency of a machine," but turns out he also had something to hide.

As Sir Clinton attempts to piece together this labyrinthine puzzle, the murderer makes several additional attempts on the lives of the other family members. The house is burgled and an answer has to be found to a small side problem concerning a forged cheque.

So you would expect that such a rich, well written and fast-moving plot would result in a rug-puller of a detective story, but there's an unfortunate flaw in the whole scheme: the murderer's identity is painfully obvious. In fact, the murderer was so easy to spot that, initially, I rejected this person as simply being a red herring. This was, however, not the case and is what keeps the book from a place in the first rank. Nevertheless, the book still has a lot going for itself. 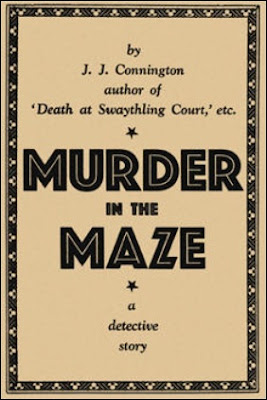 As obvious as the murderer may be, the plot is not bad. Obvious, but not bad. And very well written with some excellent scenes set in the hedge maze, which is effectively used by Connington throughout the story. The maze is a marvelous backdrop for a murky crime and lends itself perfectly for a suspenseful chase scene (c.f. Edmund Crispin's Frequent Hearses, 1950), but equally great is how Sir Clinton used the maze in order to engineer the murderer's demise. And that's something else that makes Murder in the Maze an interesting excursion.

Sir Clinton is described as a slight, unassuming man with a bored expression in his eyes, but, occasionally, they betrayed "the activity of the brain behind them." Most of the time he plays the fool and appears to be making mistakes, which begs a comparison with Columbo. However, the way in which Sir Clinton dealt with the villain squarely placed him alongside H.C. Bailey's Reginald Fortune and Gladys Mitchell's Mrs. Bradley. A group of detectives you don't want to tangle with when you have just committed a morally indefensible murder, because they have their own ambiguous interpretation of law and justice. I always find such detective characters to be endlessly fascinating.

All in all, Murder in the Maze is not a flawless detective story, but certainly an interesting one that was excellently written and characterized, which is perhaps best read as an introduction to Connington and Sir Clinton. However, I have to read more to know for sure whether he improved with time or was simply not all that good at hiding his murderers from his readers. So I'll get back to Connington in the hopefully not so distant future. Stay tuned!
Geplaatst door TomCat on 7/29/2017