Erle Stanley Gardner was a prolific and consistent mystery writers, who churned out books and short stories faster than a Gatling machine gun can spit out bullets, which included over eighty (!) novels about his most famous creation, Perry Mason – a courtroom wizard who often took gross liberties with the law. However, Mason was not the only the character Gardner created.

Gardner penned three, novel-length mystery series with a relatively long and not entirely unsuccessful run. One of these series was published under a pseudonym, namely "A.A. Fair," which covered thirty books about the Nero Wolfean Bertha Cool and her legman, Donald Lam. A third series counted only nine titles and were originally serialized in slick magazines, such as The Country Gentleman and The Saturday Evening Post, before they were published as books. And this particular series has long held my interest as they seemed to offer a delicious slice of small town Americana. 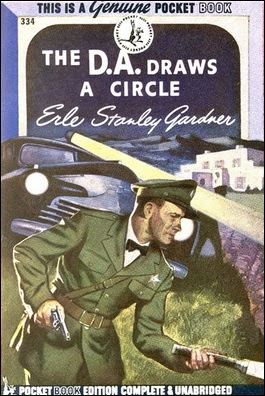 The series in question is set in the fictional county of Madison City, California, which had been under the control of a political organization for fifteen years, but the then district attorney got careless and "the sheriff was crooked" - giving rise to a populist uprising against the political establishment of Madison City. Doug Selby and Rex Brandon "furnished the spearhead of a political ticket" that "swept the machine aside."

So Selby was sworn in as the new district attorney of the county and Brandon became the newly elected sheriff, but both men still have to content with the remnants of the old political structure. A structure that stills seems to work as a opposition power in the third book of the series. There is, however, another problem slinking into Selby's district.

The D.A. Draws a Circle (1939) introduces a dangerous and cunning antagonist for the district attorney, Alphonse Baker Carr, who is a well-known, unscrupulous criminal lawyer with notorious underworld figures as clients – which does not sit well with his new neighbors of the swanky neighborhood of Orange Heights. Mrs. Rita Artrim believes Carr has nothing to contribute to the community that's "either desirable or healthy," but Selby can't stop the lawyer from buying property in the county.

Nevertheless, the moment "old A.B.C." sets foot in his district the problems begin for the newly elected D.A. and sheriff: a bail-jumper from Los Angeles, Peter C. Ribber, is picked up by a patrol car and accidentally released again. A dry cleaner finds a brown suit in his truck, on which a "sinister red stain had encrusted into stiffness," with a powder-burned hole in the center. A resident of Orange Heights called the police to report a naked man, who was seen running around, which is followed by the report of a gunshot.

On the following morning, the body of a naked man is discovered with a fatal gunshot wound. However, the single gunshot wound has two bullets in them and "the second bullet almost paralleled the course of the first bullet." So the question is not only who fired the fatal shot, but also why anyone would toss a slug into a dead body.

The victim is identified as Morton Taleman, a criminal associate of Ribber, who is a client of A.B. Carr. As to be expected, Ribber immediately engages Carr upon his arrest, but Selby and Brandon have another problem on their plate. One of the previously mentioned characters, Mrs. Altrim, became a widow when she lost her husband in a roadside accident, which left her elderly father-in-law a cripple with amnesia. However, Selby learns from their live-in nurse, Miss Anne Saxe, that employer and patient may have designs on one another, because she believes Mrs. Altrim had a hand in the accident – which tosses a double-edged motive for murder into the household. 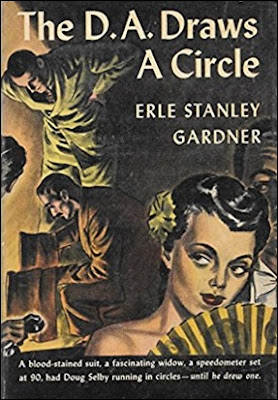 On the one hand, you have to old man who is slowly regaining his memory, as well as his mobility, while on the other you have someone afraid of being found out. This problems comes to a head when one of them goes missing and only leaves a blood-covered liquor closet behind. And this is also the plot-thread that gives the book its title, because Selby, based on the mileage on a speedometer, draws a circle on a map of the vicinity in which the body must have been hidden. On the last pages, the book-title gets an additional and delightful meaning.

So, that makes for a pretty bundle of trouble, but The D.A. Draws a Circle is not really about who did what and why, but how Selby navigates a treacherous maze of petty power politics and deceit. You can label the book as a strategic detective and the approach recalls that of an inverted mystery (e.g. Columbo), in which the primary question is how the detective will checkmate his opponents and in this instance it's a two-on-one match. The (interlocking) solutions to the aforementioned problems are merely the cherry on top.

I mentioned earlier how the political landscape of Madison City contains remnants of the previous regime, which are actively working against Selby and Brandon. You get a front-row seat to their scheming in the sixth chapter when the editor of the Blade, Frank Grierson, has a closed-door meeting with the dull-witted Chief of Police, Otto Larking. Grierson cooks up a plan ensuring Selby loses both face and political capital, which is done by making sure the man arrested by Larking is exonerated by Carr in court. Before the trail, the Blade is going to publish editorials minimizing the difficulties of the case and suggesting to the public that getting a conviction is a mere formality.

So that would make Selby look very bad, if he fails to secure a conviction, while the Blade and Larking come out of it smelling like a rose garden. There are only two routes that could upset this plan: beat the famous criminal lawyer in court or find a complete solution to the problems, which are both easier said than done.

In my (far from humble) opinion, the way in which Selby outwitted his reluctant prisoner and "a big-time, crooked shyster," simultaneously circumventing the schemes of his political opposition, is what made The D.A. Draws a Circle a tremendous read reminiscent of the best inverted detectives with a cleverly worked out, double-pronged (murder) plot on top of that.

So, I really should return to Gardner's work more often, because they always deliver in one way or another. Maybe I should try one of his Gramps Wiggins novels next. You know, for, uhm, obvious reasons. ;)
Geplaatst door TomCat on 7/06/2017