Erle Stanley Gardner's The Case of the Smoking Chimney (1943) is the second of only two detective novels about one of his lesser-known characters, Gramp Wiggins, who's described by his own relatives as "an old reprobate" driving "an unwashed, rattletrap automobile" with worn tires and a cracked windshield – pulling "a thoroughly disreputable home-made trailer" behind it. At irregular intervals, Gramp Wiggins deposits his "bachelor's den-on-wheels" on the driveway of his granddaughter, Mildred, and grandson-in-law, Frank Duryea. 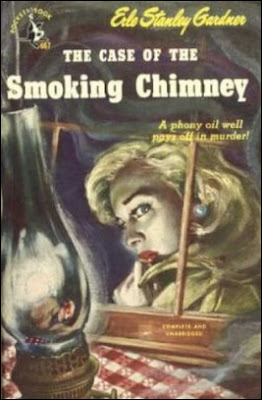 Frank Duryea is the District Attorney of Santa Delbarra County, California, whose work never fails to arouse the interest of the chronically curious Gramp Wiggins. A personality trait that's not exactly tempered by the fact a murder is committed in the district every time the old man parks his ramshackle trailer in the driveway of the D.A. However, I'm getting ahead of the plot.

The first dozen, briefly written, chapters are a testament to Gardner's talent for plot construction and his ability to manipulate an intricate web of plot-threads, which has strands running along a large cast of characters – giving armchair detectives enough possibilities to mull over. I think these chapters also demonstrated the author's expertise in legal shenanigans.

Ralph G. Pressman of Los Angeles is the unscrupulous businessman at the heart of these legal shenanigans, which spells bad news for the simple farmers and ranchers of a small town called Petrie. There was "a cloud on the title" of the farms and this meant that everyone who possesses the oil rights has "the right to enter upon the land" to "prospect for oil." Additionally, the oil rights also give the legal holder permission to erect derricks, sumps, refineries, storage tanks and pumping stations as well as laying new roads and pipelines. So whoever held the rights was pretty much allowed to do everything necessary to get "the oil out of the land."

Unfortunately, the local ranchers and farmers never took the potentially invasive reservation on their property very seriously until Pressman bought the oil rights for a song, which was rubber-stamped by the Santa Delbarra's superior court and the district court of appeals – prompting Everett True, editor of the Petrie Herald, to write a fiery condemnation. There is, however, nothing that can be done. One of the local ranchers, Hugh Sonders, already has an oil derrick planted on what he always assumed was his private property.

As if that wasn't bad enough, Pressman has an ace up his sleeve to ensure his scheme is profitable. After all, the oil wells might turn out to be as dry as a law book. So he wants the locals to have an opportunity to buy him out and has a bought a small, inexpensive ranch with a cabin under the name of Jack P. Reedley. When the local committee comes knocking for a contribution, Pressman will know how much is in the kitty and as a newcomer he'll ask question. If he plays his cards right, this little side-plan will give him all the inside information needed to wrangle money out of the oil wells. Even if they turn out to be bone dry.

Well, this alone would be good enough a premise for a detective story, but Gardner further complicated the plot with several additional plot-threads presented in those very same opening chapters!

Pressman's efficient secretary, Jane Graven, has the standing instructions to open all incoming mail and, in his absence, she opened an envelope from a private detective agency. The content of the envelope consisted of a report confirming that Pressman's much younger wife, Sophie, has been seeing a young stockbroker, named Pellman Baxter, behind his back – supplemented with photographic evidence. Sophie managed to get her hands on the envelope before the murder is discovered.

However, Sophie is not only one who has been taking advantage of the businessman: a cashier and auditor of the Pressman interest, Harvey Stanwood, has been dipping into his employer's pocket to nurture a gambling habit and impress his girlfriend, Eva Raymond. However, Stanwood's luck has run out and discovers himself in an impossible position when he has less than twenty-four hours to replace nearly $20,000 in embezzled money. Luckily, George Karper "believed that every man had his price" and wants to part with some hard cash in exchange for "the low-down on the Petrie oil business." All of it! 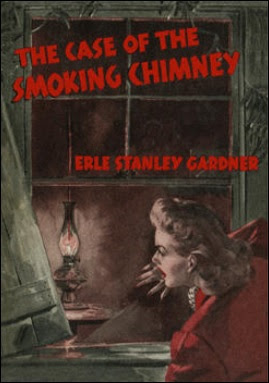 So there are more than enough potential suspects and motives to go around when Pressman's body is found in his locked cabin: the top of his head had been blown off by a bullet from a Colt revolver. The key to the door was tightly clasped inside the dead man's hand, but you should not read the book as a locked room mystery. As reported elsewhere, the book is on the marginal side as an impossible crime story and the answer to the locked door is a cheat. Nevertheless, the locked nature of the cabin is of relevance to the overall plot and even provides an important clue to the identity of the murderer, which is why I (reluctantly) labeled this blog-post as a locked room mystery. But you should not read the book solely for its minor locked room angle.

You should read The Case of the Smoking Chimney for the detective work done by Gramp Wiggins. Or to be more precise, the character interaction between Gramp Wiggins, Frank Duryea and Mildred that's at the heart of the investigation. A character-dynamic vaguely recalling Craig Rice's John J. Malone, Jake Justus and Helene Brand, but the relationships here are, of course, a little bit different.

One difference really setting this book apart from most of its contemporaries is that, regardless of his familial ties to the District Attorney, Gramp Wiggins isn't given unfettered access to the crime-scene and suspects – on the contrary! Duryea actively tries to dissuade his grandfather-in-law from intervening in the investigation, which proved to have a very low success rate. A good example of this is when Duryea, while looking over the body, discovers Gramp Wiggins has his face pressed against the window, like a creepy hobo, to see what was happening inside the cabin. Gramp Wiggins also managed to worm his way inside Duryea's office and question some of the witnesses.
Regardless of his many eccentricities (such as plying his relatives with alcohol and smuggling coffee across the Mexican border), Gramp Wiggins does some first-class detective work by correctly interpreting such obscure clues as the meaning behind the fake suicide note, the footsteps heard inside the cabin a day before the murder and the amount of oil burned by the lamp during the night – which form a properly forged chain link of clues attached to the only person who could have done it. So that was a really rewarding aspect of the story.

On a whole, The Case of the Smoking Chimney is perhaps a minor detective novel, but the plot and clues are solid enough that they can be used as a convenient excuse to fling a copy of the book on your to-be-read pile. Not that most of you need an excuse, but it's there whenever you need it.
Geplaatst door TomCat on 7/25/2017