Robert Adey wrote in his preface to the second, revised edition of Locked Room Murders (1991) that after the 1930s, "the one writer who continued to concentrate his powers almost exclusively on impossible crime novels" was John Dickson Carr with the only other author "who produced them in any quantity" being a little-known pulp writer, John Russell Fearn – who wrote (roughly) twenty locked room novels between Black Maria, M.A. (1944) and his untimely passing in 1960. These include the posthumously published The Man Who Was Not (2005) and Pattern of Murder (2006). 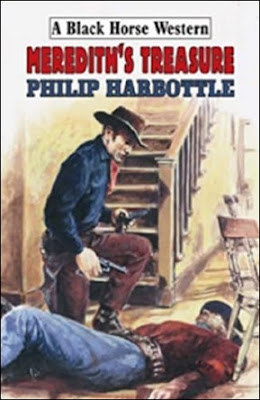 In my reviews of The Fourth Door (1948) and What Happened to Hammond? (1951), I went over the wealth of fresh ideas and originality Fearn brought to the detective story. And, in particular, to the impossible crime story.

Regrettably, the pile of unread Fearn novels have dwindled over the years and only one, of the twentysome, locked room mysteries remained on my wishlist. An extremely obscure, hard-to-get Western-style mystery, Merridrew Marches On (1951), which has a curious backstory that has remained invisible to most locked room readers until now.

Meredith's Treasure (2005) by Philip Harbottle, editor, writer and Fearn's long-time literary agent, was first published by Robert Hale in their hardcover "Black Horse Western" series and the synopsis had a specific line that attracted my immediate attention – a dead man is found on a mountain trail with "no footprints in the dust beside his body." What can I say? Every body of water has its shallow parts. However, when I contacted Harbottle to inquire about Meredith's Treasure potential status as an impossible crime novel, he told me that it was actually based on two separate already published novels written by Fearn. Namely the previously mentioned, very obscure, Merridrew Marches On and Merridrew Fights Again (1952). So what's the backstory?

Harbottle explained that, in 2000, Robert Hale had lost a lot of their regular writers and his Cosmos Literary Agency had been hired to help them maintain their ten new titles every month "Black Horse" line. His still active writers were able to supply new novels along with scores of their older titles, which Hale reprinted with due acknowledgments and Harbottle himself supplied a number of new novels that were based around a number of disparate Fearn short stories and novelettes. As copyright holder of all Fearn's stories by virtue of his widow's will, Harbottle was legally entitled to create these posthumous collaborations.

Harbottle explained that he had "to completely rewrite and "stitch" two, and sometimes three, separate stories together, changing all the different heroes and heroines to the same person" to "expand them to novel length" – whilst "retaining much of Fearn's original text." There was, however, an important proviso imposed by Hale's library buyers. They could only reprint old paperbacks and, under no circumstances, would the library buyers accept hardcover reprints. Fortunately, most of his clients had published Westerns mostly in paperbacks and only Fearn had done hardcovers in any quantity, which left out the Merridrew Westerns. A series Harbottle thought "represented some of his very best work." So he decided to rewrite the Merridrew character/books, which made them qualify as brand new works to satisfy Hale's library buyers. Harbottle explained that the originals had modern setting, the 1950s, but all the characters in the small, isolated Arizona town ride around on horses, carry gun belts and six shooters and act just like old-time cowboys. Every now, and then, the town is "invaded" by the modern world when outsiders arrive in cars, or trucks, who bring modern equipment with them. So he decided to rewrite them as all taking place in the old west (c. 1890). No cars, no airplanes, no radios. Merridrew became Meredith. He rewrote the first and second novel, but the third and fourth posed a real problem. 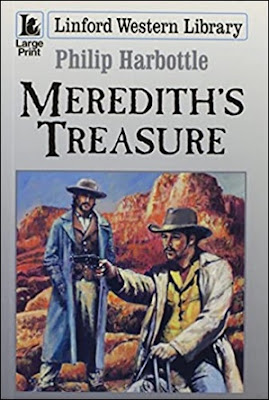 Merridrew Marches On and Merridrew Fights Again have plots involving their modern-day setting, such as the discovery of uranium and initially secret mining operations, which is why he decided to merge the two novels into Meredith's Treasure. A merger that retained all of the original plot strands, motivations and impossible crime elements, but with all the names of characters changed to those of relatives and friends of Harbottle. One of the characters is named after Robert Adey! Something he very much enjoyed.

So why this long introduction to a pulp western/detective novel? Merridrew Marches On is listed in Adey's Locked Room Murders and so will be known, in name only, to readers of this blog. A blog with a special interest in locked room and impossible crime fiction. However, I doubt very much whether many of you have actually read Merridrew Marches On, because it is extremely scarce and expensive. So the question is whether Harbottle's more readily available Meredith's Treasure, in which he asserts has preserved Fearn's impossible crime plotting, is worth our attention – purely on its own merits. Let's find out!

First of all, I've to acknowledge that the blending, an stitching together, of two different novels was indeed seamlessly done, because the whole plot coherently stuck together. However, it does explain why the story cycles from one genre to another. Story begins as an old-fashioned Western, but quickly turns into a detective story with an impossible crime, covered in the fingerprints of the scientific mystery, before it turns into an all-out adventure-and thriller yarn with all the trappings of the Western. And, all the while, Fearn's science-fiction and pulp roots were showing.

Meredith's Treasure takes place in "a sweltering little township," Mountain Peak, where "every board was warped and every trace of paint had been blistered" by the torrid Arizona sunlight. The small township is governed by the potbellied Mayor Randle Meredith and his son, Sheriff Bart Meredith.

On a blistering, mid-afternoon, Sheriff Meredith is visited by Reverend Maurice Peregrine, creator of the Reformed Sinners' Gospel, whose lectures and sermons converted many hardened criminals in other towns – picked Mountain Peak as his present port of call to spread his gospel. Legally, or morally, there are no objections to him preaching, but the Merediths are worried about the dozen dusty, gruff and impatient-looking horsemen he brought with him. All of them converted criminals. What could go wrong? Their arrival coincides with the appearance in town of a wanted criminal, "Holdup" Hogan, who has been involved "in a sundry of stage holdups and train robberies." As to be expected, this leads to a confrontation between Hogan, Peregrine and the Mayor, but they're interrupted by Brian Teviotdale storming into the saloon. On the foothill trail, Brian encountered a phantom horseman who began to chase him and he fled "like a man with the devil at his heels." One of the patrons, Bob Cook, is skeptical and immediately goes to the spot where Brian saw the phantom horseman, which is where his body is eventually found. There are no marks on the body and no accounting how the body got there or the lack of footprints in the dust. Dr. Adey makes it even more of an impossible situation when he tells the Meredith's Cook was gassed to death! 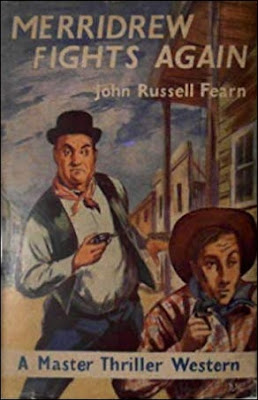 This is not the last murder, or impossibility, in the first half of the story. A local girl is found murdered in the streets with "Holdup" Hogan next to her. So the towns people are ready to string him up on the spot, but, before he can be swung into eternity, a third body appears out of nowhere in the middle of the main street! The entire crowd stared into the dark sky for an answer, but there was nothing there "but the stars and the silence of the night." Cleverly, the possibility of a hot-air balloon is quickly eliminated as too large and slow moving not to have been spotted by the crowd.

What I liked about the detective bits and pieces, roughly taking up the first half of the story, is how they quickly come to the conclusion that they're "not dealing with hillbillies" who only know "the trigger of a gun" – which doesn't rhyme with the deaths suggesting "intelligence and scientific knowledge." And this apparent fact was cleverly woven into the plot. Admittedly, the people who read Meredith's Treasure as a detective novel will very likely spot the brains behind the plot, but how the bodies miraculously appeared in impossible places is a lot trickier and more in line with the weird menace pulps than with the pure locked room/impossible crime story. On first sight, the method seems out-of-time and the imagery of how it was done would be more at home in a fantasy/science-fiction story, but it actually existed in the 1890s. And it actually figured in one of Edward D. Hoch's short stories about his gun-slinging cowboy sleuth, Ben Snow.

Yes, Harbottle definitely succeeded in preserving Fearn's impossible crime plotting and ideas here, because the solution is unmistakably one of his. It perfectly fits in his with his other pulp-style locked room mysteries, Account Settled (1949) and The Rattenbury Mystery (1955).

After this halfway mark, the story becomes, more and more, an adventure-and thriller yarn with a Western setting centering around the planned assault on a mountain stronghold and the long-buried secrets held inside it. This second half is full of dangerous bluffs, deadly double crosses and a cunning piece of misdirection with the Meredith's finding themselves, more than once, in a very tight corner where death is only a heartbeat away. Mayor Meredith is not exactly, what you would call, an infallible detective and surprisingly hardboiled in his approach, which include a bit of (mental) torture to extract information. An explosive and dangerous situation that eventually devolves in Mexican standoff between the Meredith Posse, a gang of outlaws and a group of natives trying to protect the mountain's long-held secret. This becomes quite a bloody affair that can match one of Paul Doherty's historical bloodbaths. Mayor Meredith concludes the case with a puppeteering act that even Dr. Gideon Fell or H.M. would find questionable. Very hardboiled!

So, on a whole, Meredith's Treasure is a busy, fast-moving and interesting pulp-style take on the Western, but where does it rank among Fearn/Harbottle's output and the former's impossible crime novels? I wouldn't rank it with their best detective/locked room novels, such as Thy Arm Alone (1947), Except for One Thing (1947), Death in Silhouette (1950), Flashpoint (1950) and Pattern of Murder, but still towers over lesser novels like The Tattoo Murders (1949), Ghost Canyon (1950), Lonely Road Murder (1954), Robbery Without Violence (1957) and One Way Out (2012). So very much a mid-tier, or second-string, novel. Nevertheless, it can stand on its own as a fun, pulpy treatment of the Western blended with the traditional detective story that's well worth a read as long as you keep in mind that it was written as a Western first and a detective story second.

I'll return to Fearn's original work sometime in the near future, because my private stash of pulp has been replenished and look forward to reading Fearn's attempt at a mystery novel with real vampires in it.
Geplaatst door TomCat on 10/11/2020