An Impossible Murder for Markus (1969) by Aster Berkhof

Lode van den Bergh is a Belgian writer and, once upon a time, he was the most read author in Flanders who, under the nom de plume "Aster Berkhof," wrote a 101 novels and stories covering various genres and topics – ranging from adventure and humorous stories to children's books and detective novels. Berkhof debuted as a mystery novelist with De heer in grijzen mantel (The Gentleman in the Gray Cloak, 1944) and his long, storied writing career ended nearly seven decades later with De marmeren meisjes (The Marble Girls, 2013). So this makes the now 100-year-old Berkhof the last surviving Golden Age mystery writer! 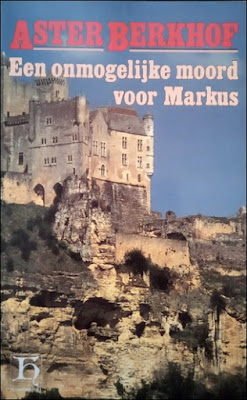 Een onmogelijke moord voor Markus (An Impossible Murder for Markus, 1969) is one of an unknown number of entries in a series about the French-Swedish Inspector Fugger Markus and his assistant, Brigadier Chic, whose cases usually bring them to colorful, sun-soaked climes. Some of you can make a pretty good guess what drew my attention to this title, but I'll return to that in a moment.

The story opens with Inspector Markus en route to the villa of a well-known French movie producer, Claude Bloch, on the Côte d'Azur, which had been erected on the remnants of a Saraceem castle and overlooked "a fantastic ravine" – more than a hundred meters deep! And at the rock strewn bottom, like a smashed dot, lays the body of Bloch's wife. Lucia Cana was an Italian film diva who loved to sit on the balustrade, directly below the yawning ravine, which is why people predicted she would go over one day, but evidence begin to emerge suggesting that she had been pushed. An unlikely suggestion considering the bizarre circumstances.

On the previous night, the housekeeper had heard a scream and the sound of furtive, muffled footsteps running away, but the summoned policemen found nobody on the premise who didn't belong there. It was too dark to see the bottom of the ravine and it was not until the following morning that the body was spotted by a shepherd. This is where the case becomes complicated.

Everyone thought Canna was in England, but apparently, she returned to the villa unannounced and without being seen, or heard, she puts on shorts and a bolero to sit on the balustrade on a cold, dark evening – which is unlikely to say the least. But if she was thrown over or pushed out of a window, why didn't any of the people heard a struggle and more screams? And if she had been knocked unconscious first, who screamed and why? Where did her husband go the previous night with a young actress, Natalie Reyran, who was rumored to take Cana's lead role in an upcoming movie project. She left her worried mother and talent agent at the villa. Not to mention the troubling lack of motives. There were five people in the villa and "instead of all having a motive for murder, so you don't know who to choose, they all have a motive for not committing the murder."

So this is why Markus calls it "an impossible murder," but, as you probably guessed by now, the murder is not an impossible crime as we understand it. Nonetheless, the book still has a strenuous claim to be labeled as a locked room mystery with a very late, but excellently presented, second murder that's first teased as a genuine locked room mystery with the victim apparently having been flung from the window of a guarded room before its almost immediately downgraded to a puzzling what-happened? – only to turn out to have been an impossible crime after all! Unfortunately, the locked room-trick didn't show the same inspiration as its presentation, but it still qualifies as one. And it was tacked on at the end. So, yeah. 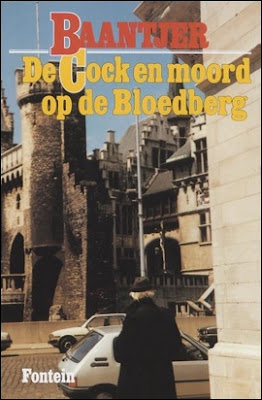 What was very well done is, while Markus and Chic work on the case, two skilled mountaineers slowly scale down the ravine to photograph and retrieve the body. Their background activity not only added a macabre touch to the sunny scenery, but effectively used to introduce the second corpse shortly after they come back up. Berkhof eagerly exploited the possibilities the setting had to offer, but you see every twist and turn coming from a mile away. I quickly caught on to the first "twist" in the tale with the rest of the story filling in the blanks, which allowed me to anticipate the second murder. And by that time, the murderer had become a walking, talking billboard of guilt.

So you probably think An Impossible Murder for Markus left me disappointed, underwhelmed or even disgusted, but nothing could be farther from the truth.

Believe it or not, the promising book title was only the second thing I noticed. The first thing was the recognizable and distinctive style of cover art of the 1988 Hadewijch edition, which is identical to the style Fontein used for my first mystery writer, A.C. Baantjer (see second cover)! A rush of nostalgia was followed by a healthy dose of curiosity about this Flemish Baantjer before the title finally registered in my mind. Judged by those standards, An Impossible Murder for Markus is comparable to a very readable, but thinly plotted, late-period Baantjer politieroman (police novel).

All in all, An Impossible Murder for Markus is the most transparent detective novel I've read in 2020, but liked it enough to try another one by the last-living Golden Age mystery writer. Moord in Mandalay (Murder in Mandalay, 1961) looks promising!

On a final, related note: before my copy arrived, I knew what the cover looked like and the basic premise of the plot (a dead actress who fell from a precarious position), but nothing else. Naturally, I began to wonder what, exactly, the impossibility entailed. Going by the bright picture on the cover, I assumed the murder was committed during the day and Cana was pushed when people had seen her sitting alone on the balustrade. And that's when a solution occurred to me. The murderer could have thrown a refrigerator snowball or an ice cold drink at her back. If you're sitting, or daydreaming, in the summer sun and something ice cold hits your back or neck, you're likely to stand, or tighten, up in reflex. But what happens when you do that to someone perched dangerously on the edge of a ravine?

I was actually angry with myself for having figured out the whole thing before the book arrived and the prospect of having to begin this review with admitting that I've read too many locked room mysteries. No such luck, guys. More locked room reviews coming soon! :)
Geplaatst door TomCat on 10/10/2020