The Case of the Seven of Calvary (1937) by Anthony Boucher

The Case of the Seven of Calvary (1937) is the ambitious first detective novel from the hands of respected genre critic, editor and science-fiction author, Anthony Boucher, which drew heavily on his college days and knowledge of the detective story – delivering what can only be described as a mystery reader's mystery novel. Boucher also used his debut as a stage for his diverse array of talents and interests. 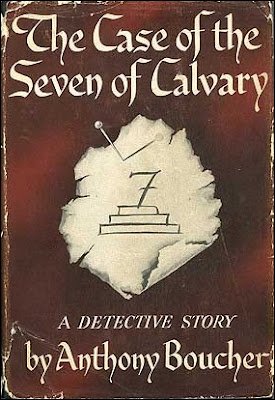 Boucher was "a natural linguist" who was fluent in French, German, Italian, Spanish, Portuguese and more than averagely proficient in Sanskrit. During his college days, Boucher was active on-and around the stage as an actor, director and playwright, which are all worked into this academic mystery novel. More importantly, the plot, structure of the novel and storytelling radiates with its authors love and understanding of the Grandest Game in the World. Boucher is more restrained in his later novels (The Case of the Solid Key, 1941), but him going all out here was a treat. I can understand why so many readers consider The Case of the Seven of Calvary to be his best detective novel.

The Case of the Seven of Calvary hits the ground running with its dramatis personae that comes with a footnote: "the reader who approaches a mystery novel as a puzzle and a challenge is cautioned that he need keep his eye only on those characters marked by an asterisk; the rest are merely necessary extras." But it doesn't stop there.

The story begins with a prelude in which Anthony Boucher discusses whether, or not, the Watson is "an outworn device" with one of main characters of the story, Martin Lamb, who's a student and resident of International House at the University of California – where he once acted as a Watson to Dr. John Ashwin. A well-known and celebrated professor of Sanskrit whose translations rank among the indispensable standard works of every library worth its name. Martin begins to tell him the story and promises that his account "shall be a model of fair play."

A story that begins with the arrival of Dr. Hugo Schaedel, an unofficial ambassador of the Swiss Republic, who's on a worldwide lecture tour to preach World Peace and argue in favor of a universal brotherhood of man. A brotherhood as exemplified by the "incredible assortment of nationalities" at International House, which is one of the reason why he decided to address them. So a peaceful and harmless man, who was a complete stranger, but, during an evening stroll, Dr. Schaedel is attacked and killed with an ice pick! The murderer left behind a piece of paper with a symbol on it: "a curious sort of italic F, mounted upon three rectangles shaped like steps."

This symbol is quickly identified as the calling card of the Vignards, "Seven of Calvary," which is an obscure Swiss sect of political and religious sectarians who have fomented and fostered "most of the dissensions which have torn Switzerland." Such as their 1920s secret campaign against the League of Nations, but even Dr. Ashwin finds this possibility "a trifle too early Doyle" for his taste.

Dr. Ashwin acts throughout the story as an armchair detective and uses Martin as an accessory to his reasoning (i.e. a Watson) as they discuss and analyze that immortal trinity of detective fiction – namely Motive, Means and Opportunity. They go over the six motives for murder classified by F. Jesse Tennyson in Murder and Its Motives (1924) and exchange ideas why a murderer would leave behind a cyrptic message. Was it an artistic embellishment? A warning to others? A red herring? There's also the question of opportunity and a peculiarity with the alibis or why the murderer used an ice pick to kill his victim. Was it because it's an uncharacteristic and untraceable, but deadly, weapon? Dr. Ashwin funnily remarks that Sherlock Holmes would have deduced from the ice pick that "the murderer was a cuckold," because "his household still employs an icebox in these days of electric refrigeration" and "most probably occasioned by his wife's intrigue with the proverbial iceman." 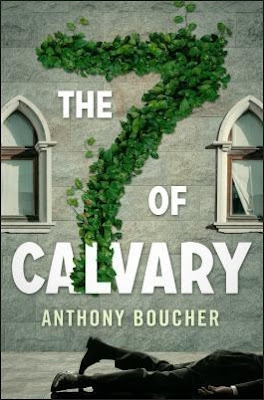 Boucher made a gutsy move during the first seven chapters by revealing the truth behind the murder, minus the murderer's identity, which is something that has been done before and since, but usually trotted out as a surprise twist towards the end. A surprise that rarely lands. But here it beautifully paved the way for the second murder. An onstage poisoning during a dress rehearsal of a college play, Don Juan Returns, with another cryptic note left on the stage.

The Case of the Seven of Calvary very much belongs to that category of the simon-pure jigsaw-puzzle detective story (to borrow a phrase from Boucher) sharing the essential facts with the reader and then, "in the manner of the admirable Ellery Queen," challenges them to solve it – referring back to all of the clues in the footnotes of the penultimate chapter. And urges the reader to check their solutions against "the obvious certainty of Dr. John Ashwin." That's how you write a detective story!

Nevertheless, classifying The Case of the Seven of Calvary merely as a solid, puzzle-oriented detective novel in the Van Dine-Queen School would be selling Boucher short as a writer in general. All of the locations in the book are places where Boucher had lived, studied or worked and this allowed him to portray university life in an authentic and convincing manner. It feels like a real place filled with real people. Boucher was very brazen for his time when he touched upon the interracial romances at International House and an abortion, which must have raised some of his readers' eyebrows at the time. You have to remember that the author of The Strawstack Murder Case (1936), Kirke Mechem, had his second manuscript rejected because these subjects were central to the plot. The manuscript was lost to history and Mechem never wrote another detective novel.

So it was quite daring for a debuting novelist to casually throw that into the story, but Boucher didn't stop there. Dr. Ashwin and Martin discuss how a very sordid crime, known as the Twin Peaks Murder, usurped the newspaper headlines. A married man who left behind his mistress, naked and dead, in his own car that was parked on Twin Peaks. The murder weapon, covered with fingerprints, was found nearby. A stark contrast with the puzzling, seemingly motiveless, murder of the visiting emissary and the curious symbol that was left beside the corpse.

But these realistic touches and convincingly drawn backdrop helped massage out a flaw usually found in these overindulgent detective stories that are more than a little conscious that they're a detective story ("Well, I'm that worst abortion of nature, an amateur detective"). As fun as they may be to wholesale consumers of detective fiction, they tend to be a trifle artificial, but that was not the case here. The Case of the Seven of Calvary reads like a storybook murderer had escaped the printed page and there just so happened to be a brilliant professor and a student on hand to help sort out the mess as that "imperishable Master of Baker Street" and his indispensable Watson. I also liked how Boucher handled and used, what could be called, an unrealistic, minutely-timed alibi and cleverly employed in the greater good of the plot. And how it related to the second murder. Very 1930s Christopher Bush! And that's another point in its favor!

So, all in all, The Case of the Seven of Calvary is an enthusiastic and vigorous first detective novel from a well-known, highly respected critic and with logical, fairly clued plot that arguably makes it one of the best debuts of the Golden Decade of the Golden Age. Highly recommended!
Geplaatst door TomCat on 10/03/2020